A number of London locations were used during the filming of SPECTRE. We take a look at them here. 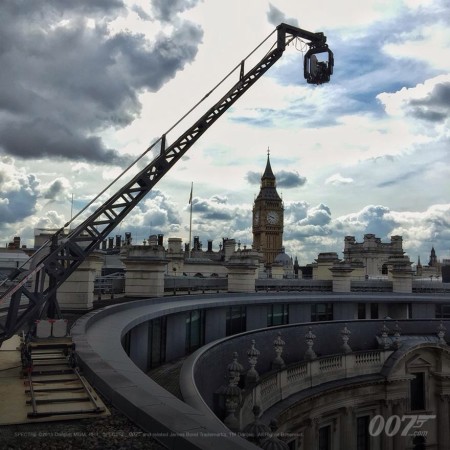 After Bond returns from Mexico he has a meeting with M, during which he is introduced to C. Afterwards Bond strides through a circular courtyard. Just as he is about to exit Moneypenny manages to intercept him to hand over his personal effects.

This is located in centre of the building that houses the Treasury and Revenue and Customs. Beneath the Treasury is the Churchill War Rooms where Winston Churchill installed himself during World War II. The entrance is next to the steps from Horse Guards Road up to King Charles Street.

Bond asks Moneypenny to bring his belongings to his flat that night. The exteriors were shot at outside 1 Stanley Gardens in Notting Hill. Rather confusingly the front entrance is actually on Stanley Crescent.

In Skyfall the real life MI6 headquarters was damaged by an explosion and so in SPECTRE it is scheduled for demolition. And while MI6 is working out of other premises, the Centre for National Security (CNS) has been constructed on the opposite bank of the Thames.

While there is a 16 storey apartment block there, it is very different from what you see in SPECTRE. The building was being constructed during filming and makes use of heavy CGI on screen. Of course at the end of the film the MI6 building collapses, the James Bond universe veering sharply away from reality in a way that confronts many Londoners every day. I wonder if the series will be rebooted again when they introduce a new actor and the MI6 building can be used again.

For an idea of what both buildings look like in reality take a look at the panoramic image below. You can change your viewpoint with the cursor:

While external shots of the CNS building were CGI, the interior spiral stairwell was shot at City Hall. Situated on the south bank of the Thames, this is where the Mayor of London has his office.

Early during filming Daniel Craig and Rory Kinnear were seen on the Thames near Vauxhall Bridge and Camden Lock. This is the scene in which Tanner takes Bond to Q’s new lab. They enter a tunnel near Millbank Tower on the north bank of the Thames, although it doesn’t exist there in reality. It is possible interiors were shot in Camden Lock though.

One location that is more straightforward is Rules restaurant. 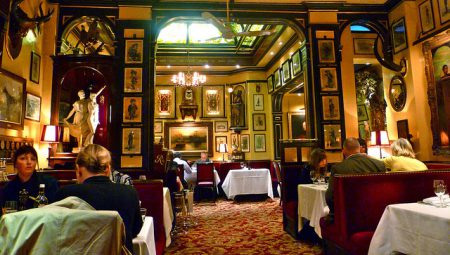 Moneypenny and Q go to find M and tell him 007 is in north Africa. Located at 35 Maiden Lane in Covent Garden, Rules serves traditional British dishes. Founded in 1798, it’s the oldest restaurant in London. M’s table is easily identified by the large picture hanging on the wall in front of him.

After Bond and Madeleine return from SPECTRE’s Moroccan hideaway M leads Tanner and Q to an MI6 safe house, Hildebrand Prints & Rarities. They exit at street level onto Spring Gardens, next to Admiralty Arch.

The scenes of the cars crossing London were shot at various locations. Starting at the top of The Mall and under Admiralty Arch, they go down Horse Guards Road onto Birdcage Walk and Storey’s Gate.  The next identifiable location is Coleman Street, from where they turn into a tunnel. In reality this is White Horse Yard, a loading bay that has been CGI enhanced to look like a tunnel entrance.

The tunnel scenes were actually filmed in Castle Baynard Street, while M escapes up Bennet’s Hill and onto Queen Victoria Street. Meanwhile Bond is driven down Horseferry Road towards the Thames as they head for the old MI6 headquarters.

More filming took place next to the Thames for the climax. These are the scenes when Bond and Madeleine pursue Blofeld’s helicopter in a speedboat. They go under Lambeth Bridge with Bond shooting at the helicopter. 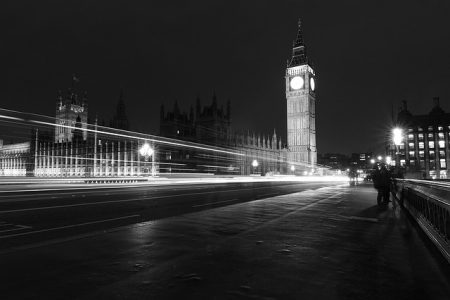 As the chopper goes down you can see the London Eye in the background several times. The helicopter comes down on Westminster Bridge, where Bond confronts a wounded Blofeld.

The final scene of 007 and Madeleine driving off in the DB5 was shot in Whitehall. It’s next to the building in which the Department of International Trade is located.