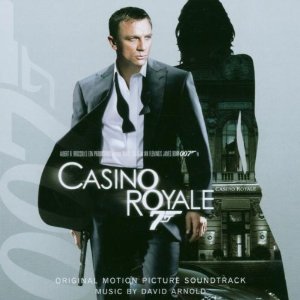 The James Bond franchise has seen regular changes in actors, style and direction over the years.  And, after Pierce Brosnan’s final appearance as 007 in Die Another Day, the series underwent arguably its greatest reinvention to date.

Whilst being the 21st film in the series, Casino Royale took James Bond back to his roots, as a young, inexperienced MI6 agent.  Closely based on Ian Fleming’s novel, Daniel Craig was cast as Bond in the franchise reboot.  When deciding on the music for the film, however, the producers decided to turn to an old hand as David Arnold was once again asked to provide the score; his fourth for the series.

To record the title track, producers Michael G Wilson and Barbara Broccoli announced in July 2006 that former Audioslave and Soundgarden vocalist Chris Cornell would provide the theme for Casino Royale.  Cornell was chosen partly as the producers wanted a strong male vocalist to reflect the grittier, inexperienced Bond (no male vocalist had sung a Bond theme since Morton Harket performed The Living Daylights in 1987).

Not normally associated with the musical style of a Bond theme, Cornell was keen to record a track that was respectful to the Bond tradition.  He told Variety magazine: “I (wanted) an orchestra. I didn’t want to do a song for a James Bond film and not have it sound somewhat like a James Bond song.”

Unlike many of the previous soundtracks where the artists had written the theme song in isolation, Arnold collaborated with Cornell on his song You Know My Name.  The first Bond theme since Octopussy not to use the film’s title in its lyrics (Cornell admitted that he “couldn’t imagine it fitting into a song lyric that would come out of my mouth”), the song was recorded at London’s AIR studios.

Described by the singer as “more up-tempo and a little more aggressive than any other Bond theme has been, maybe since Paul McCartney” (Live and Let Die), You Know My Name was a hit across the world, reaching number 7 in the UK singles chart.

Arnold also wanted the musical motif from You Know My Name to replace the James Bond theme during Casino Royale, reflecting Bond’s immaturity and inexperience.  The instrumental theme from You Know My Name can be heard throughout Arnold’s soundtrack, most effectively on I’m The Money – where Bond first meets Vesper Lynd and on Dinner Jackets.

Ironically, although the theme is woven throughout Arnold’s score, You Know My Name doesn’t appear on the on the Casino Royale CD soundtrack album.  The song was available as a single and on Cornell’s own album Carry On, with Cornell stating that this happened because he wanted the song to be ‘his’.  Additionally, since he wrote You Know My Name in midst of recording his solo album, Cornell felt that the song belonged to the album.  This makes Casino Royale the one and only Bond album that doesn’t include the title song on the soundtrack.

What Arnold did on Casino Royale is to take a step backwards from the driving electronica of Die Another Day and revert to a more classical, orchestral score.  What results is an unmistakeable but ‘new’ Bond sound, mirroring the reboot of the film series.

Arnold’s soundtrack manages to be Bond-esque without using any of the previous Bond motifs.  As Casino Royale is the first Bond adventure, the composer was keen to avoid using the existing Monty Norman and John Barry themes in the film.  Indeed, you only hear the iconic James Bond Theme over the end credits – immediately after 007 utters the immortal words “The name’s Bond.  James Bond.”

In addition to 74 minutes of music on one of the longest CD soundtracks of the series, an additional 13 short tracks and excerpts were made available as iTunes downloads, making Casino Royale probably the most complete collection of soundtrack music for a single 007 film.

Allmusic rather harshly dismissed Casino Royale as a ‘missed opportunity’ for Arnold to ‘reinvent the dated spy music’ of previous Bond films.  Actually, the composer does a pretty good job of making a Bond soundtrack sound like classic Barry without using any motifs or themes that an audience might recognise.

Once again, the collaboration between title track writer and Arnold gives the score some consistency, and it’s a crying shame that Cornell’s superb title track is not included on the CD.  All in all, though, this is another great collection of spy film music from a man set to be as important to the development of Bond music as Monty Norman and John Barry before him.

You Know My name

One Response to “Casino Royale soundtrack”