Home > Films > The Man With The Golden Gun 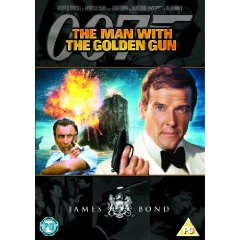 I’ll start off by saying that I am biased; The Man With The Golden Gun is the very first Bond film I saw (at the cinema, before they had even showed Dr No on television) and so it will always have a special place in my heart.

Conventional wisdom has it that The Man With The Golden Gun is one of the weakest in the series, but it is surely time for this view to be revised. It is not perfect by a long way, but it has almost the right balance of action to humour and with few gadgets it is head and shoulders above the silliness of Moonraker, Octopussy and A View to a Kill and a much better film than the mess of Live And Let Die.

Where I do agree with conventional wisdom is that Britt Ekland as Mary Goodnight is terrible – or more to the point the character is terrible, a repeat of Rosy Carver in Live And Let Die. And that film continues to haunt us with the unwelcome reappearance of Sherriff J.W. Pepper, a character who serves no purpose at all except act as a prototype for the redneck sheriff in The Dukes of Hazard. At least the speedboat chase is better than the car chases in both Diamonds Are Forever and Live And Let Die, although the car chase here could have done without the jump with a 360 degree twist and especially without that whistle noise.

However, Scaramanga’s surreal funfair has that otherworldly feeling you get from any film by David Lynch (and the film even has a midget, à la Twin Peaks). The villain isn’t too over the top and well acted. And Roger Moore’s jokes and innuendo are just about right.

All in all, the Man With The Golden Gun is way above average compared with the other Moore films and a good, fun film. Buy a The Man With The
Golden Gun poster or print. Read more about the On The Man With The Golden Gun Soundtrack or buy it online.

Live And Let Die | The Spy Who Loved Me