A detailed look at the spectacular Italian locations that appear in No Time to Die. 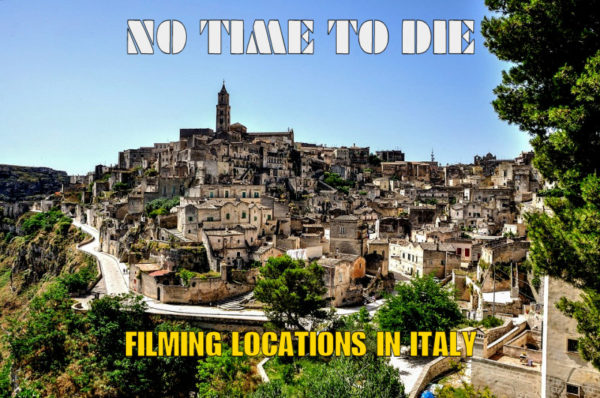 After Norway the pre-title sequence of No Time to Die jumps forward in time to Bond and Madeleine in southern Italy after leaving London at the end of SPECTRE. Extensive use was made of Italy’s spectacular locations, including the towns of Matera and Gravina.

If you’re in southern Italy and want to visit the locations where the 25th James Bond film was shot then you can use this article to find the exact spots used in filming.

Zoom in to view at street level, or open in a new window for a larger view

The times given below are taken from the streaming release of No Time to Die. DVD timings will vary slightly due to the variance in playback speed.

1. Bond and Madeleine at the beach The first Italian location is Spiaggia Cent’Ammari. Madeleine is swimming here when we first meet her as an adult [6:51]. Bond is on the path on the rocky outcrop that juts out slightly in the middle of this small bay [7:03]. Behind him you can see the distinctive peak of the mountain that towers over Maratea [7:05].

2. Coastal road Behind the wheel of his DB5 Bond drives Madeline along the winding coastal road south of Sapri headed towards Acquafredda [7:25]. It’s the same stretch of road that Madeleine drives Mathilde in the V8 Vantage at the end of the film. While the watchtower seen in the shot does exist, the tunnel into which the car disappears is CGI.

3. Arrival in Sassi di Matera As is the tunnel from which they emerge overlooking Matera [8:12]. That shot is taken from the bottom of  Via D’Addozio as the DB5 descends until it reaches Via Madonna delle Virtù. Not only is the tunnel CGI, but so is the bridge to the left of the frame. The bridge is, in fact, in Gravina di Puglia.

4. Parking the DB5 They leave the car at the bottom of Via Bruno Buozzi next to a valet parking sign at dusk [8:14].

6. Hotel room Although the hotel lobby appears to be located close to where you find Le Scuderie Noha the hotel room was in fact a set built on a platform at the bottom of Piazza Giovanni Pascoli, presumably to make the most of the views [9:05].

7. Cemetery set #1 The cemetery where Vesper is buried doesn’t exist in reality. Sets were constructed in two locations for filming. One was constructed near the bridge in Gravina [12:16]. It is used in shots in which the bridge is visible.

8. Cemetery set #2 The other cemetery set is used for shots with Matera in the background [12:33]. Here Vesper’s tomb was constructed.

9. La Gravina bridge The sequence in the bridge was shot in Gravina [14:46]. The cables were added for the production, as was the concrete block which Bond uses to protect himself against being run over by the Maserati. After jumping from the bridge Bond goes through a couple of narrow stone archways. They look as if they are located in the base of the bridge.

10. Bond escapes on foot Bond clambers through a passageway built into the rock, emerging through a wooden door. Looking around, he heads up the path [15:51].

11. Bond continues his escape Bond runs round a corner with the church of Madonna delle Grazie towering behind him [15:57].

12. Primo loses his bionic eye After Primo arrives on his bike at the top of the stairs, Bond launches himself at the SPECTRE man and knocks him off[16:00]. After banging his head against the pillar Primo’s eye pops out and rolls down the steps. Bond grabs the bike and rides it down them, skidding left at the bottom [16:36].

13. Bond reaches the bottom of the steps There is a jump in location here as Bond rides up steps in the narrow passageway (Recinto I Fiorentini) from Via Lombardi to the long climb of stone steps [16:51].

14. A long climb The next shot changes location slightly around the corner as he continues to ascend [16:52].

16. The procession A religious procession heads down the steps from the Cathedral square [16:57].

18. The motorbike jump Bond lands the bike in the square then exits up the steps of Salita Castelvecchio [17:09].

19. Bond arrives back at the hotel The hotel has changed location since they checked in as he arrives in the small square opposite Albergo Palazzo Viceconte [17:12]. He dumps the bike and goes to find Madeleine in their room, where he confronts her.

20. Evading the SPECTRE cars Running down the steps of Rione Pianelle, Bond and Madeleine collect the DB5 from the same spot they dropped it off [18:09].From Via Bruno Buozzi the DB5 initially turns left onto Piazza San Pietro Caveoso but faced with a SPECTRE pursuit car Bond does an about turn. Another SPECTRE car attempts to block him off from Vico Solitario so Bond again turns the car 180 degrees and continues along Via Madonna delle Virtù with SPECTRE in pursuit.

21. The DB5 is pursued by SPECTRE Bond and Madeleine continue with  SPECTRE in hot pursuit [18:43].

22. The hairpin After the hairpin bend the DB5 continues as the road becomes Via Sant’Antonio Abate [19:27].

24. Bond does a hard right The DB5 turns into Via D’Addozio to avoid an oncoming SPECTRE car, dropping explosive charges behind him [19:47]. However, the road next to the church is blocked by sheep. Forced to turn around, Bond then turns right, taking him back on the street he was on previously.

25. Onto Via Fiorentini The DB5 continues its path as the street becomes Via Fiorentini [19:58]. So far the car chase works in real life, until he makes a right turn.

27. Bond drives the DB5 down steps Bond drives the car down the steps of Vico S. Leonardo and turns left onto Via Bruno Buozzi [20:06]. This is a different section of the road where the DB5 was left with valet parking.

28. A Range Rover rams the DB5 The DB5 is rammed by a Range Rover.  Madeleine urges Bond to do something to get them out of their predicament [20:11]. This is where Bond shows off the DB5’s new weaponry. However, the bell tower in which the camera appears to be located is CGI.

29. Exit from Piazza San Giovanni They escape by driving into the narrow Via San Biagio, in a cloud of tyre smoke [22:13].

31. Bond drives at high speed to the station Here is another jump in location as Bond makes a left from Via XX Settembre northbound onto Via Stigliani [22:18]. Bond then takes a right onto Via Giuseppe Gattini.

32. Arriving at the station The next shot is in Sapri. Bond brings the car to a screeching halt outside Sapri train station in Piazza Vittorio Veneto [22:26]. Note that this shot is a mirror image of how it looks in real life and the signage has been flipped using CGI.

33. Saying goodbye Bond says goodbye to Madeleine on the platform at Sapri train station [22:45]. Signage during filming was changed to the fictional town of Civita Lucana although I haven’t spotted it in the film.

The scenes at the end of the film with Madeleine, Mathilde and Nomi after they had left Safin’s island were shot in Italy. They had been planned for Spiaggia dell’Arcomagno, although it isn’t clear whether this location was actually used in the end.

No Time to Die walking tour of Matera

Step behind the scenes of No Time to Die on a guided English language walking tour of Matera. Explore all the filming locations in Matera with a special 007 cocktail at the end of the 2 hour 30 minute tour.