Also in this section

While the weapon most often associated with him is the Walther PPK, it didn’t start out that way. James Bond’s original gun of choice was a Beretta .25 automatic, which he used on a number of missions.

While the exact Beretta model is not specified it is generally accepted to be the 418. In Doctor No (1958) Bond tells M he has used it for 15 years. That rules out the Jetfire, which only started production in 1952. 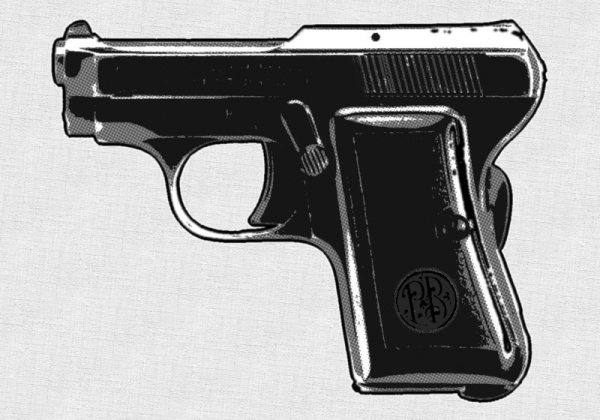 Fleming describes Bond’s Beretta several times as having a skeleton grip, which is to say the side panels of the grip are removed exposing the frame.

Fleming also tells a couple of times that the gun has a “taped butt” which would make it more comfortable to handle. The Beretta 418 has a safety lever in the back of the grip which is depressed when the gun is in handled. The tape would also have the effect of holding it down to make it easier to get off a shot in a hurry.

In Diamonds Are Forever we learn a few more details about the Beretta. Bond as sawn the foresight of his Beretta and has filed the pin to a point, although why he did the latter is never answered. And, in common with all Secret Service firearms, his Beretta has had the serial number removed.

Bond usually carries the Beretta is a light chamois leather shoulder holster, although he sometimes tucks it into the waistband of his trousers. He has also been known to sleep with it under his pillow.

He carries as silencer in hidden pocket of his attaché case in Diamonds Are Forever and within a tube of Palmolive shaving cream in From Russia, With Love.

After Bond loses his Beretta in Moonraker M provides him with a new one, as well as a long-barrel Colt.

However, after almost losing his life to Rosa Klebb in From Russia, With Love due to a silencer catching in the holster, at the beginning of Doctor No we find M asking the armourer, Major Boothroyd, to recommend an alternative.

Boothroyd criticises the Beretta for being “a lady’s gun” and underpowered. His answer was to replace Bond’s beloved Beretta with a 7.65mm Walther PPK. 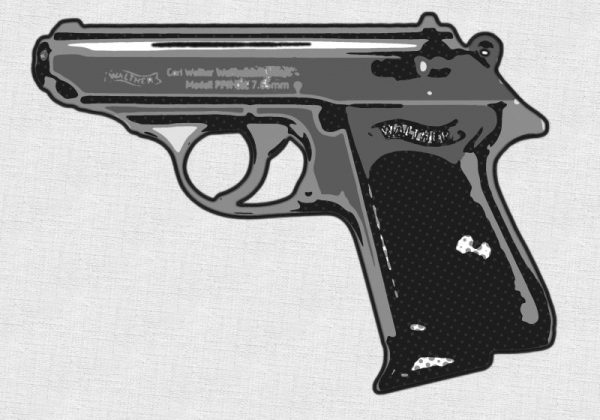 In a weapons test the armourer ranked it fourth, behind the Japanese M-14, the Russian Tokarev and the Sauer M-38. He praises it for its light trigger pull and, unlike the Japanese and Russian guns, the ability to obtain ammunition for it anywhere in the world. It isn’t clear why he rejects the Sauer.

The armourer also recommends Bond ditch his chamois leather shoulder holster for a Berns-Martin holster. While the Berns-Martin holster is also mentioned afterwards in Goldfinger and the short story For Your Eyes Only, Fleming got this detail wrong. It is, in fact, designed to hold a revolver.

Despite Bond’s initial reluctance to switch to the Walther, he subsequently uses it successfully on a number of missions. Just a few chapters later he is already sleeping with it under his pillow, just as he had done with the Beretta.

In Goldfinger Bond removes a thick book from his suitcase. Perhaps surprisingly it is The Bible Designed to be Read as Literature. However, less surprisingly, he opens it to find his PPK in the Berns-Martin holster within. This he wears inside his waistband on the left.

By the time of On Her Majesty’s Secret Service Bond carries his gun in a “soft leather holster” at his waist, which is also mentioned in The Man With the Golden Gun.

Bond also sometimes has a .45 Colt in a hidden in his car. Fleming refers to a “long-barrelled Colt Army Special .45” that he removes from a holster concealed under the dashboard in Casino Royale.

Since the Army Special wasn’t available in .45 calibre the most likely candidate for this gun seems to be the Colt US Army models 1909 or 1917. 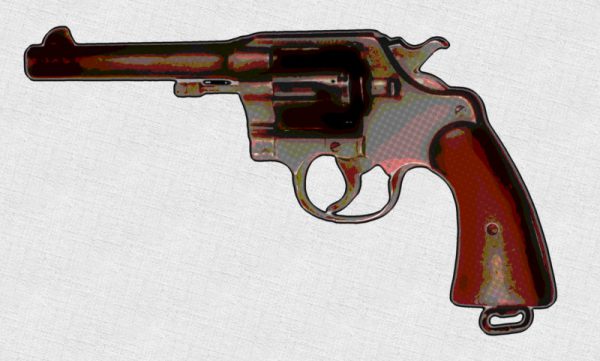 Introduced during World War I, the M1917 was a version of the M1909 New Service revolver re-chambered to accept .45 ACP automatic rounds. These were plentiful while the standard issue M1911 semi-automatic Colt “Government” was in short supply. The rimless cartridges were held in place by a half moon clip, each of which held three rounds.

In Moonraker Bond again removes the gun from under the dashboard. After the gun is destroyed when his car is wrecked by Sir Hugo Drax, M replaces the long-barrel Colt as well as Bond’s Beretta. Bond mentions the “45 Colt with the long barrel” to Major Boothroyd in Doctor No.

Bond’s Aston Martin tricked out DB Mark III in Goldfinger has a long-barrelled Colt .45 hidden in a secret compartment under the driver’s seat. And in the short story From a View to a Kill Bond carries a long-barrel .45 Colt when investigating the disappearance of a British army dispatch rider.

While the .45 appears in the books several times, it isn’t the only Colt used by Bond.

At the end of the first chapter of Casino Royale Bond has just crawled into bed. Under his pillow is a .38 Colt Police Positive. He also gets hold of a Colt .38 Detective Special from Tee-Hee in Live and Let Die. While both are described as having a sawn barrel, presumably Fleming meant they were both snubnose revolvers. He also uses a Detective Special in the Secret Service gun range at the start of Moonraker.

The final mention of a Colt is in The Man With the Golden Gun, although it is not Bond’s weapon.

At a dinner organised by Scaramanga for his associates Bond uses it to liven up the party by shooting a fake pineapple off the head of the singer of a band.

As well as the Walther PPK, Boothroyd also suggests Bond carry a Smith & Wesson Centennial Airweight .38 for use when “something bigger” is required. 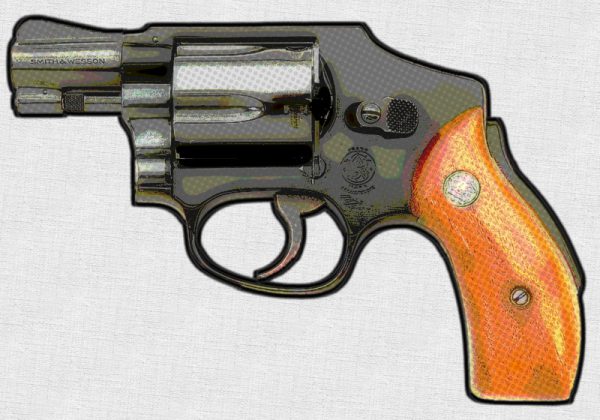 The Smith & Wesson is hammerless to avoid getting caught on clothing and to keep the weight down holds only 5 cartridges. The gun has a two inch barrel and is chambered for .38 special ammunition. The Airweight version of the Centennial has an aluminium alloy frame, reducing the weight from 21 to 13 ounces (595g to 370g).

Although Boothroyd refers to the Centennial as hammerless it actually has fully enclosed hammer and therefore a double-action only weapon. It also features a grip safety.

As there is no thumb spur on the Centennial it cannot be manually cocked and therefore lacks the ability to be fired single-action.

In Doctor No Bond decides to take the Smith & Wesson with him to Crab Key. He decides that if there is any shooting it will be “Heavy, long-range stuff” and the “brutal, stumpy revolver had an extra twenty-five yards”.

Prior to being captured he uses it to take out the headlights of Dr No’s “dragon” but finds it ineffective against a flamethrower.

As a secret agent Bond primarily carries a handgun concealed in a shoulder holster or inside his waistband. However there are a number of occasions when he uses something larger.

In the short story For Your Eyes Only he is equipped with a Savage 99F by Colonel Johns of the Royal Canadian Mounted Police. He tells Bond it belongs to a friend and is fitted with a Weatherby telescopic sight.

After escaping from Dr No’s lair Bond grabs a Remington carbine from a gun rack. As he and Honey escape in the “dragon” they stop briefly for him to shoot at the pack of dogs sent after them.

At the start of The Living Daylights Bond is at Bisley firing range.

He is there ahead of setting off for West Berlin where he is to ensure a defecting agent makes it across the border on one of three nights. Bond’s task is to kill a Russian sniper attempting to shoot the agent.

Bond is trying out the rifle he will use in Berlin. It is “mostly a .308-calibre International Experimental Target rifle built by Winchester” for competition shooting with “the usual gadgets of super-accurate target weapons”. These include an extension to the stock to hold it firmly into the shoulder and an adjustable pinion to fix it firmly in place.

The weapon has been modified by the armourer to include a five-shot magazine in place of the usual single-shot bolt action. Bond has attached an infrared sniperscope to hit a target at 500 yards.

The gun is likely to be a modified version of the Winchester Model 70, sometime known as “The Rifleman’s Rifle”. Winchester did in fact make three experimental rifles based on the Model 70 for competition shooting and the design matches Fleming’s description closely.

In Live and Let Die Bond wears shoes with steel lined toe caps, something that is noted in SMERSH’s dossier on him in From Russia, with Love. It also notes he is “known to carry a knife strapped to his left forearm”.

When he later flies to Istanbul he carries a tricked out attaché case. It includes two flat throwing knives in the sides which he uses against Red Grant. And in Goldfinger Bond wears shoes that each contain a double edged knife accessed by twisting the heels.

And in Thunderball Bond and a group of sailors from the USS Manta take on Largo’s men armed with nothing more than broom handles to which sharpened flick knife blades are afixed.