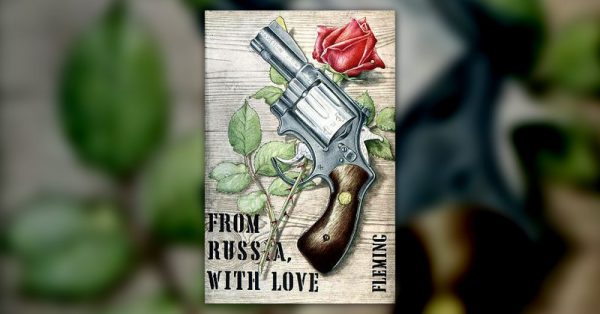 Many Bond fans know the name Boothroyd. The secret service armourer appeared in the novel Dr No and then in the first James Bond movie based on that book. In a short sequence near the start of the film Major Boothroyd recommends Bond adopt the Walther PPK in place of his preferred Beretta.

The name came from a gun expert who wrote to Fleming after reading several of his books. Geoffrey Boothroyd was a fan of James Bond but, as he told Fleming, he didn’t think much of his choice of firearms. He considered the Beretta was insufficient for 007’s needs.

Boothroyd recommended Bond use a revolver rather than an automatic and suggested two Smith & Wessons.

According to Boothroyd, Bond should carry a Centennial Airweight carried in a Berns Martin Triple Draw holster and keep a .357 Magnum with 6½ inch barrel in the car.

When Fleming asked for weapons that might be carried by Russian agents Boothroyd listed the Walther PPK 7.65mm as one of a number of options. This led to Bond adopting the Walther PPK in Dr No, although Fleming introduced a number of errors by doing so.

Fleming’s correspondence with Boothroyd began in 1956. It was a couple of months after Diamonds Are Forever had been published and with the first draft of From Russia, with Love completed at Goldeneye the previous winter.

An article by Fleming that included a number of the letters by the two were published as The Guns of James Bond in Sports Illustrated in March 1962, and as James Bond’s Hardware in the Sunday Times in November 1962.

The article was originally intended to be an intro to a book on guns by Boothroyd but was much longer than originally anticipated. 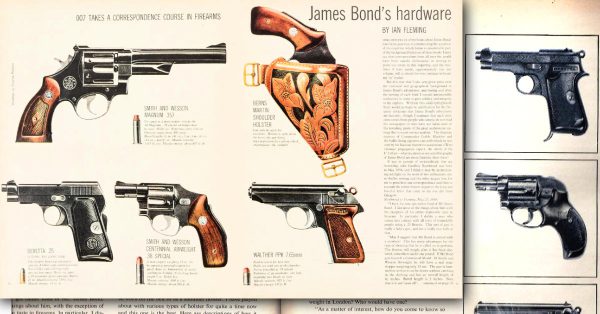 The article features illustrations, although they vary in the two published versions (above).

The gun in James Bond’s Hardware appears to me to be a hybrid. Both feature the Smith & Wesson Magnum suggested by Boothroyd, even though it doesn’t actually make it into the books.

I used to own a copy of the Sunday Times article, although at some point I unfortunately mislaid it. I thought it would show up when I moved from the UK in 2001 but no luck. It’s lost forever.

You can also read some of their correspondence, including the first from Boothroyd, in The Man With The Golden Typewriter: Ian Fleming’s James Bond Letters.

Boothroyd appeared in a short documentary that was broadcast on BBC2 in 1964. You can watch it below:

From Glasgow, with Love?

Fleming’s original idea for the From Russia, with Love dust jacket was for a painting of a Beretta .25 crossed with a rose. However, he was unable to source a suitable gun for artist Richard Chopping to work from. So in July 1956, having seen a photograph of one of Boothroyd’s guns, Fleming asked if he could borrow it for Chopping.

The gun was a Smith & Wesson .38 Military & Police model with sawn off barrel. It also had a cutaway trigger guard to aid fast draw, which Boothroyd specialised in.

Boothroyd agreed and sent the gun to Fleming in early September 1956, who passed it on to Chopping. However, Boothroyd got in touch with Fleming on the 18th after the police had called on him.

Three women had been shot dead in Glasgow a day earlier with a .38 pistol. As he lived in the city Boothroyd was therefore a suspect.

Boothroyd explained that he had informed police that the gun was in Fleming’s possession. However, he didn’t know whether Fleming had a firearms licence. Fleming replied that he did hold a licence and would retrieve the gun from Chopping.

In a letter letter at the start of October, in response to Boothroyd, Fleming explains how the police phoned while Chopping was in his office with the finished cover for the cover artwork. Fleming was suitably amused by Chopping’s clear discomfort.

The killings, usually known as the Burnside Murders, were eventually pinned on serial killer Peter Manuel. He was convicted of murdering seven people between 1956 and 1958 and is thought to have killed two more.