Sunglasses are an easy addition to the collection of anyone inspired by James Bond’s sense of style. Here we look at the brands worn by 007 in the films. 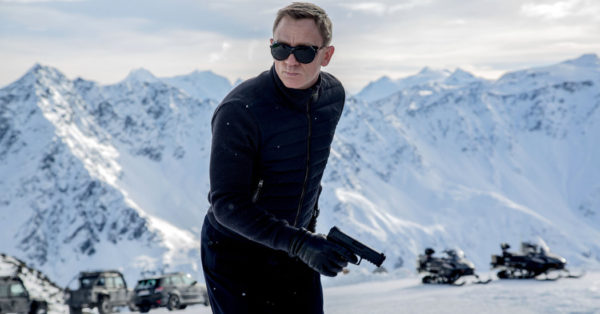 Sunglasses barely feature in Ian Fleming’s books at all. And even in the film series it was only recently when Bond began to wear sunglasses regularly.

While Ian Fleming told us 007’s preferred brands of watch, lighter, cigarettes and even shampoo, we will never know his preferred sunglasses. Probably the only time James Bond wears sunglasses is in the short story The Property of a Lady.

Sean Connery wore sunglasses just twice in his six Eon movies. George Lazenby briefly sported a pair of driving glasses. And Roger Moore only used eyewear in his last Bond film. And then nothing until Pierce Brosnan’s third film, The World Is Not Enough.

Since then, James Bond has worn sunglasses in every film. The driver behind this is the growth in luxury eyewear since the 1990s, which exploded in the early part of the 21st century.

The first sunglasses to appear in a James Bond film weren’t actually worn by 007, but worn by one of his allies instead. Jack Lord, who played Felix Leiter in Dr No, looked super cool with his sharp sixties suit and eyes barely hidden by pale lenses. Despite the glare of the Jamaican sun, 007 does without sunglasses though.

The first occasion we find James Bond wearing sunglasses is in From Russia With Love. After he finds Tania in his hotel bed, Bond arranges to meet her the following day and tails her into a mosque to ensure she isn’t being followed. As he peels himself away from the back of a guided tour, Bond approaches the camera wearing what look like tortoiseshell sunglasses with brown lenses. They seem to be larger than Ray-Bans and a different shape but there is no close-up to aid further identification. 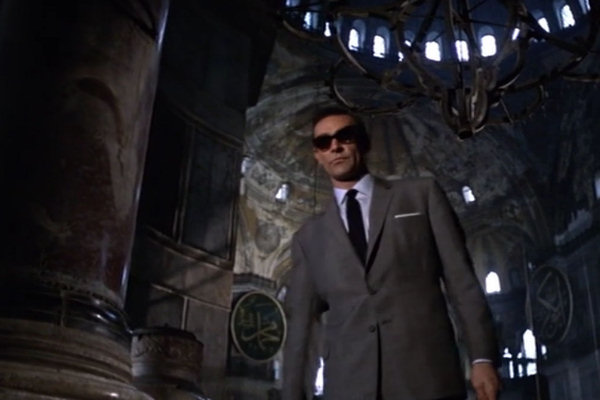 The next James Bond sunglasses to appear are in Thunderball, perhaps unsurprising considering the tropical location. When confronting Domino with the news of her brother’s death, Bond hands her his wristwatch and dog tags. But more to the point, for this website at least, he is wearing black framed Wayfarer style sunglasses. 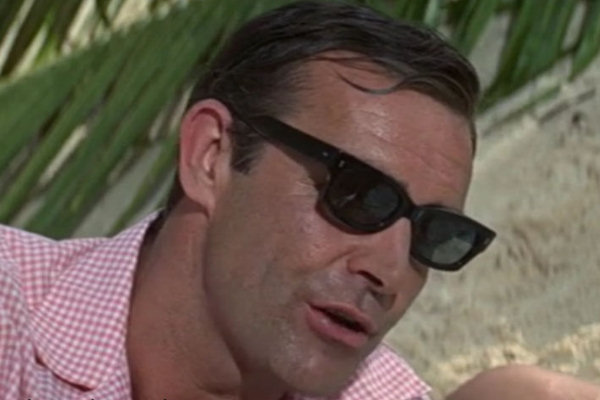 There are a couple of good shots where you can see the hinge details. Rather than being horizontally orientated bars on the front of the frame, as on Ray-Bans, the hinge seems to be attached to the frame with two single points on each side, which are vertically orientated. If you’ve got Thunderball on Blu-Ray  you should be able to see this more clearly. Also note that rather than the underside of the frame being simply curved, it angled towards the outer edges.

Several brands that have been suggested, with varying degrees of credibility. The model that fits best is Polaroid Cool Rays N135 but Mason & Sons have also produced a model based on the Polaroid design in a limited run under their recently revived Curry & Paxton brand.

James Bond’s first appearance in On Her Majesty’s Secret Service is at twilight. He’s in his Aston Martin DBS and wearing a pair of yellow-tinted night driving glasses. 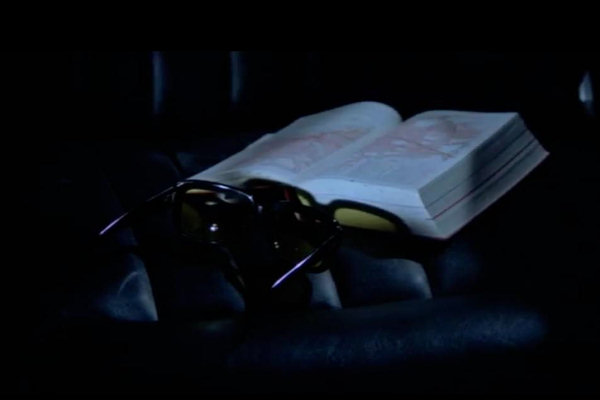 This type of glasses are designed to improve the driver’s vision at night by reducing glare and increasing contrast. These days the consensus is that they should be avoided. While the increase in contrast gives the impression night vision is improved, the opposite is actually true.

In fact you barely see them as Bond’s face is barely seen in these opening shots. Mostly the camera is located behind him and initially Lazenby’s eyes are not seen at all. The best shot of these glasses is after he has thrown them onto the passenger seat at 1m 10s, but it is too dark to see them clearly enough to identify.

Although Roger Moore remains the actor with the most Bond films to his name, it wasn’t until his seventh and final outing as 007 that he got to wear any kind of eyewear.

In A View to a Kill 007 wears a pair of oversized Aviator-style ski glasses while on a mission in Siberia to recover a microchip. These are the Bogner 7003 model produced by German eyewear manufacturer Eschenbach. 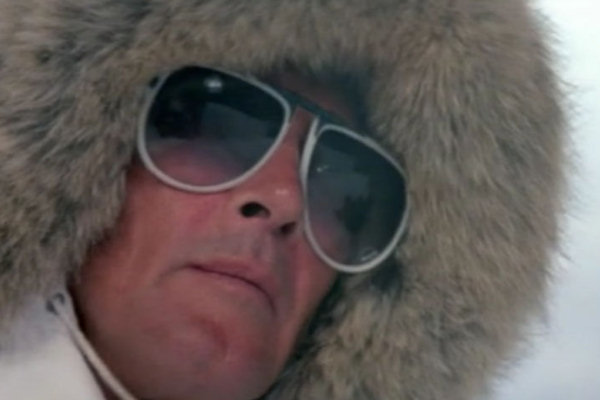 Later he dons a pair of tortoiseshell glasses while at Zorin’s chateau. But they’re neither to shade his eyes from the sun, nor simply to look cool. These glasses are tricked out by Q-Branch to allow Bond to see through tinted windows. 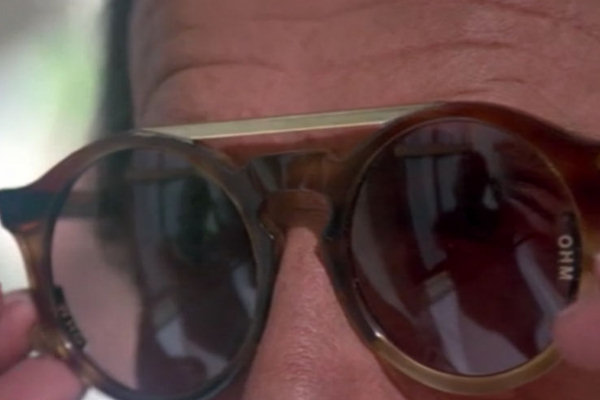 It wasn’t until halfway through Pierce Brosnan’s tenure as 007 that James Bond sunglasses were re-introduced to the series. In The World Is Not Enough James Bond once again sports eyewear, although only one pair of three are actually sunglasses.

The first is in the pre-titles sequence in Bilbao, where he is meeting the Swiss bankers. These are Calvin Klein model cK 718F with clear lenses and tricked out with a remote control detonator. 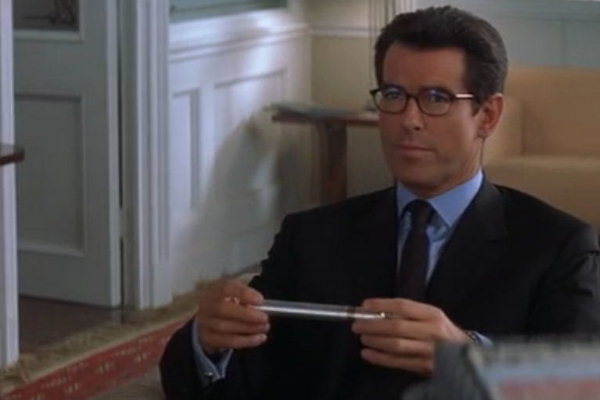 Later on in Q’s lab Bond tries on a pair of blue-lensed glasses, although their secret isn’t actually revealed until later in the casino. Then 007 is able to check out the weaponry packed by Zukovsky’s heavies thanks to x-ray vision. According to The James Bond Encyclopedia (John Cork & Collin Stutz) they contain a transparent polymer video screen which displays filtered infrared video to reveal objects hidden under the top layer of clothing. 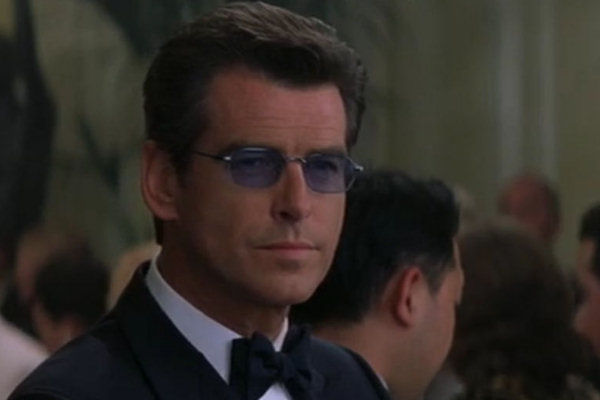 Despite Calvin Klein’s official association with the film, these glasses were bought at a high street optician’s shop and the lenses replaced. According to a post on Absolutely James Bond, The Ian Fleming Fleming Foundation confirmed with Eon that the model used was the 9048 Ant Blue 50X19 from manufacturer Blue. 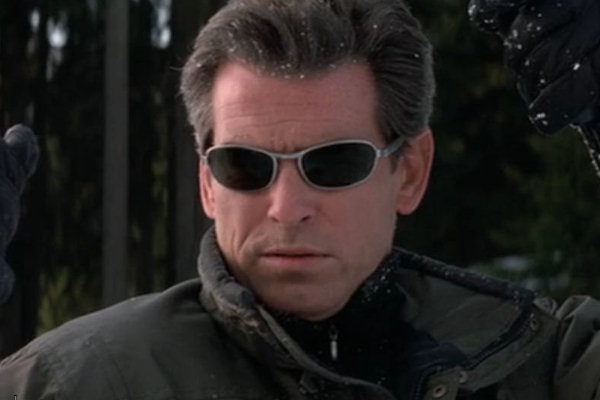 It’s little wonder that the x-ray specs are remembered rather than the glasses worn in the ski sequence. The shots in which Brosnan wears them are brief and as much of the sequence is seen in long shot and the sunglasses are nowhere near as memorable. These are Calvin Klein model cK 2007. Like the other frames appearing in The World Is Not Enough, they are no longer available.

We first meet Pierce Brosnan in Die Another Day while on a mission in North Korea where, assuming the identity of a South African arms dealer he captures, he also assumes possession of his metal-rimmed sunglasses. 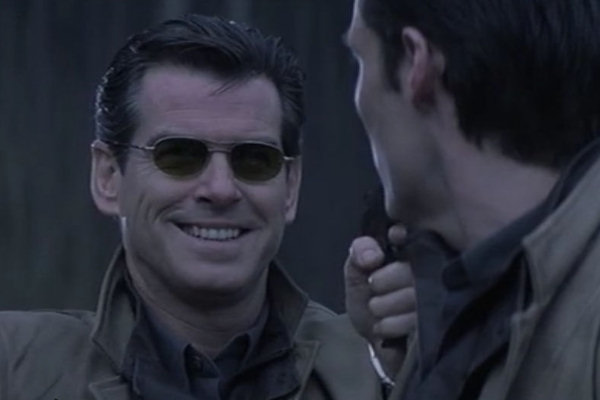 On one of the features on  the Die Another Day DVD Brosnan mentions that they were in fact his own sunglasses, believed to be Oliver Peoples.

After his spell in captivity, where he not only has no sunglasses but no shaving equipment either, 007 flies to Cuba after scrubbing up in Hong Kong. 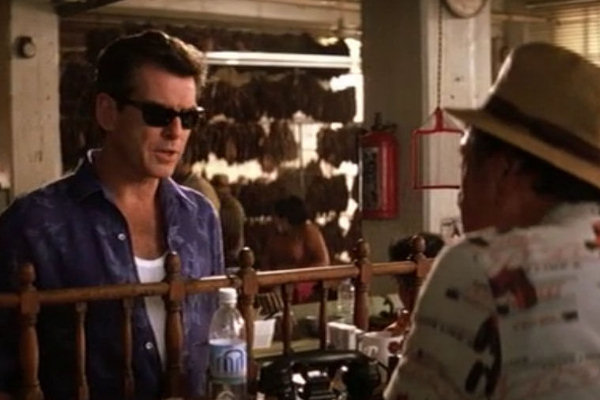 James Bond’s sunglasses upon arrival in Havana are a pair of Persol 2672-S, which were specially designed for the film and feature a tortoiseshell frame with Persol’s signature silver arrow on the temple and dark brown lenses.

When Casino Royale was released to massively positive reviews, it introduced Daniel Craig as a harder edged James Bond and took the character back to his roots.

The film’s huge budget was partly offset by huge product placement, including two pairs of sunglasses provided by Persol. The first of these models, seen when 007 lands in the Bahamas are Persol 2244-S, consisting of a gunmetal grey satin metal frame and brown lenses, colour code 834/33. 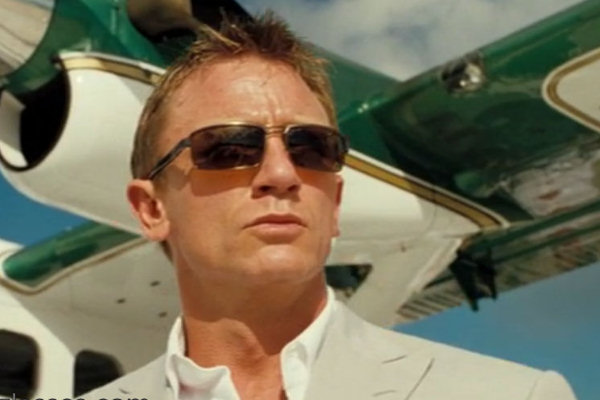 The Persol 2244 sunglasses go perfectly with Bond’s light grey linen suit and white short sleeved shirt as he steps off the seaplane while on his mission.

The second pair of Persol sunglasses worn by Daniel Craig in Casino Royale are model 2720-S. These have a tortoiseshell frame and green lenses with Persol’s distinctive hinge and are seen when Bond first meets Mathis. 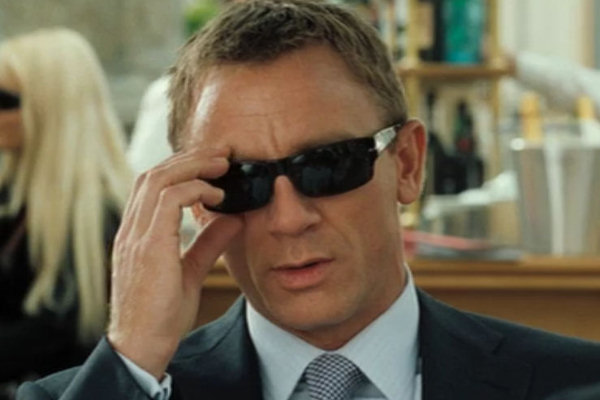 There are several options available for this model, so if you do want to get the genuine James Bond look you need to choose colour code 24/31.

In Quantum of Solace James Bond arrives in Port au Prince, and makes his way by taxi to Hotel Dessalines on the tail of Mr Slate. He is dressed casually and wearing Tom Ford 108 sunglasses. 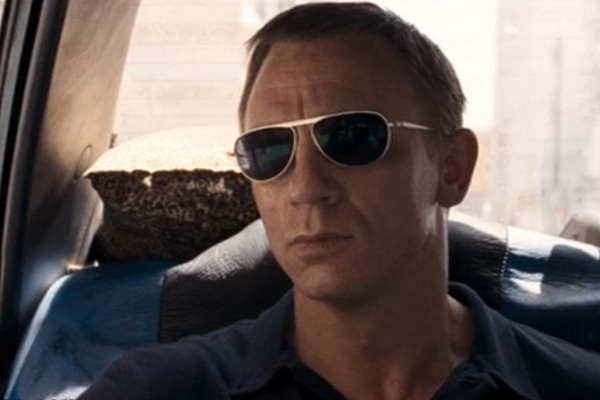 They get quite a bit of screen time. Remarkably they make it back to Europe intact as he wears them later when he goes to visit Mathis in Talamone.

Initially these sunglasses were thought to be an Oliver Peoples design, with identification based on photos taken on location. However, it later emerged that the design was a new Tom Ford model that closely resembles the Oliver Peoples sunglasses, causing some fans who had made an early purchase to return them for a refund. 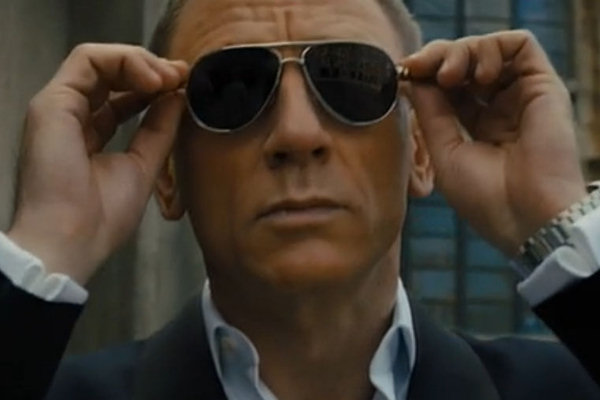 James Bond’s sunglasses in Skyfall are once again by Tom Ford. They are the Marko FT0144 18V, a rhodium frame and blue lenses. Bond wears them in the scene on Silva’s island before attempting to shoot a glass of 50 year old Macallan off the top of Severine’s head.

Tom Ford provided 007 with two models of sunglasses for SPECTRE. Both are in tortoiseshell. 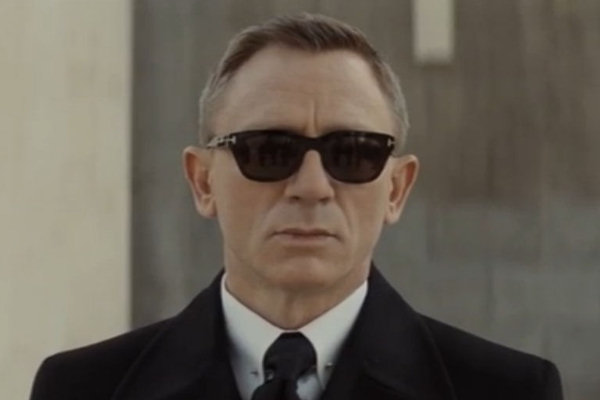 The first is seen at Sciara’s funeral in Rome, which are the Snowdon FT0237 in colour code Havana 52N. 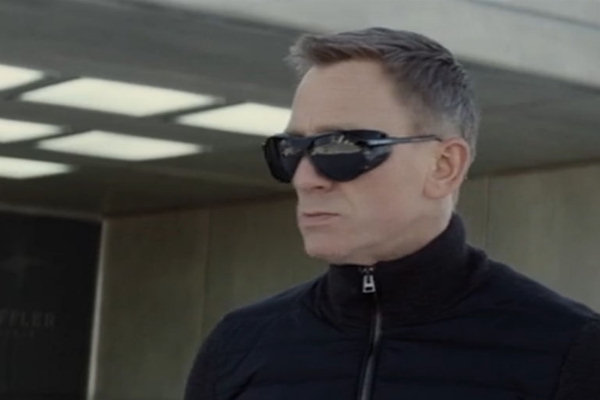 Later Bond wears a pair of Alpine glasses with leather wind guards and nose protection by Vuarnet. The model worn in the film are the vintage model 027, but the company has released a similar model with an updated design, designated the Glacier. 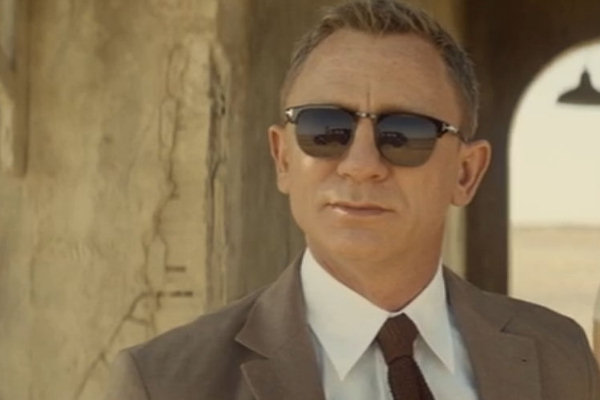 The second pair of Tom Ford sunglasses are worn by Bond in Morocco. These are the Henry Vintage Wayfarer FT0248 model in colour code 52A and appear in a number of scenes after James Bond and Madeleine disembark the train, headed for Blofeld’s lair.

No Time to Die sees 007 is kitted out with no less than four models of sunglasses. 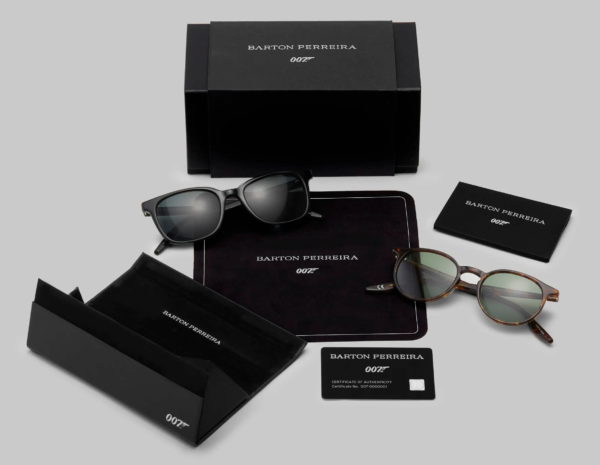 In Jamaica he sports the Vuarnet Legend 06 model, while in a scene thought to be later in the film he is wearing the Vuarnet Edge 1613. He also wears two models from Barton Perreira. These are the Joe in black with grey lenses and the Norten in chestnut with bottle green lenses.

I’ll update with photos of Daniel Craig wearing them once images are available.