A look at the cars used in Daniel Craig’s four Bond movies released to date and a preview of what is coming in No Time to Die. 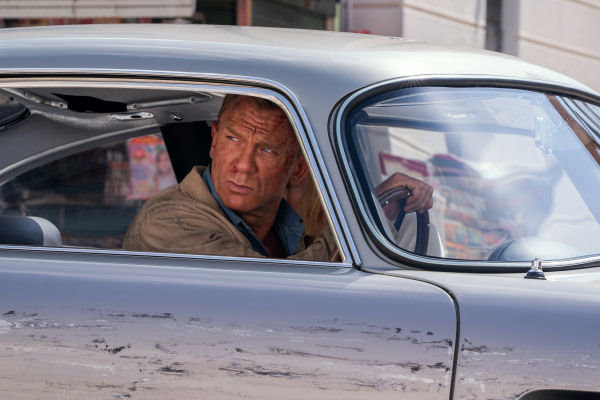 One important ingredient of the James Bond formula has always been the cars. Ever since 007 existed he has been associated with one automotive marque or another. In the books it was Bentley, although he also drove an Aston Martin DB Mk III in Goldfinger and numerous other hire cars when the occasion demanded it.

And in the films it has been Aston Martin ever since the DB5 first appeared in Goldfinger. The car became so linked to brand Bond that to this day it almost feels that without James Bond Astom Martin would have surely floundered. And they’ve come close to it on many a time.

Of course it hasn’t always been Aston Martin in the film series. There was the Sunbean Alpine in Dr No and the Bentley in From Russia With Love for instance. The Lotus Esprit in The Spy Who Loved Me is also one of Bond’s most iconic cars, turning as it did from road going vehicle to submarine at the flip of a switch.

And there were those BMWs in the 1990s. But as much as BMW make good cars, they were always more area sales manager than super secret agent.

In the Daniel Craig era there is no doubt that Bond’s marque is Aston Martin. Their cars have appeared in the four films released to date as well as the forthcoming No Time to Die.

Here we look at all the cars driven by Bond in the Daniel Craig era so far and preview the cars we can look forward to seeing when No Time to Die finally hits the big screen.

While Daniel Craig’s Bond debut is best remembered for a pair of Aston Martins, Ford joined Aston Martin Lagonda on Casino Royale as official partner. As a result Bond’s first car of the Daniel Craig era is rather more modest than usual.

After Bond arrives in The Bahamas headed for The Ocean Club on Paradise Island he is behind the wheel of 2.5-litre tonic blue Ford Mondeo Mk 4. The four-door saloon was launched in November 2006 to coincide with the release of the movie.

The second car Bond drives in Casino Royale needs no real introduction. Bond wins the left hand drive DB5 he wins off Alex Dimitrios in a game of poker. To add insult to injury Bond then seduces his wife, Solange, inadvertently sealing her death sentence.

Q Branch equips Bond with a 6-litre Aston Martin DBS V12 on assignment in Montenegro. Rather than the host of gadgets we have grown to expect, the silver-grey car is only equipped with a hidden compartment for a Walther P99 and a medical kit that includes a defibrillator. When it comes down to it that doesn’t even work.

The car is wrecked when Bond flips when pursuing Le Chiffre and swerves to avoid hitting Vesper.

Directly continuing from Casino Royale, Quantum of Solace starts with a high speed car chase. Once again Ford joins Aston Martin on the list of partners and provided Camille Montes with a Greene Planet badged Ford Ka for the scenes set in Haiti. The film also sees Bond on a Montesa Cota 4RT off-road bike.

Bond returns in a DBS at the start of Quantum of Solace as he attempts to outrun a pair of Alfa Romeos 159s at high speed. Only when Bond reaches Siena and opens the boot of the car to reveal Mr White is it clear why they are after him. The dark grey car is badly damaged during the chase and loses the driver’s door.

Dominic Greene has a fleet of Ford Edge crossovers with Greene Planet logos. Although they all had petrol engines the Edges, like Camille’s Ka, have badges indicating they are powered by hydrogen fuel cells, an option not actually offered by Ford.

Bond uses one of Greene’s cars to track him down in the desert. After leaving Greene with a can of motor oil he drives Camille to a railway station where they say their goodbyes.

While Skyfall doesn’t include an up-to-date Aston Martin, it does feature once again the classic DB5, while Jaguar Land Rover provide cars. Once again 007 uses two-wheeled transport as he pursues Patrice on a Honda CRF250R in Istanbul.

M is driven around London in a black Jaguar XJL, the long wheelbase version of the XJ. After Silva and his men ambush the committee hearing attended by M, Bond acts as getaway driver after she is bundled into the car by Tanner.

Bond drives M’s Jaguar to a lockup where he uncovers an Aston Martin DB5. It turns out not to be the same car as that he won at poker though. It is a right hand drive car and although it is his personal car it has gadgets including an ejector seat and front machine guns.

Bond drives the DB5 to Skyfall, Bond’s ancestral home in Scotland. However The car is destroyed in a firefight with Silva.

Jaguar Land Rover also proved cars for the film, most notably Hinx’s Jaguar C-X75, but also the Range Rover Sport SVR used by Hinx and his men after they grab Madeleine Swann and the two Land Rover Defender SVXs that complete the convoy.

Aston Martin is so tied to James Bond that they produced a small number of 6-litre V12 cars designated the DB10 specially for the film. Gadgets include a bullet proof body, rear facing machine gun and flamethrower, and an ejector seat for the driver to escape.

Although Q-Branch has a DB10 waiting for 009, Bond takes and drives to Rome. After escaping from the SPECTRE meeting Hinx chases Bond’s DB10 in a Jaguar C-X75 around the city.

Early in the film the car is seen as a wreck in Q’s lab. Despite being Bond’s personal car, Q tells Bond “I told you to bring it back in one piece, not bring one piece”.

However by the end of the film it has been restored and Bond and Madeleine Swann disappear into the sunset.

Daniel Craig’s fifth and final outing as 007 includes a number of Aston Martins. The trailer reveals Bond driving the gadget equipped DB5 in the southern Italian town of Matera. The stunt cars were in fact replicas with carbon fibre bodies with BMW engines allowing them to manoeuvre unlike any real DB5 has ever done. 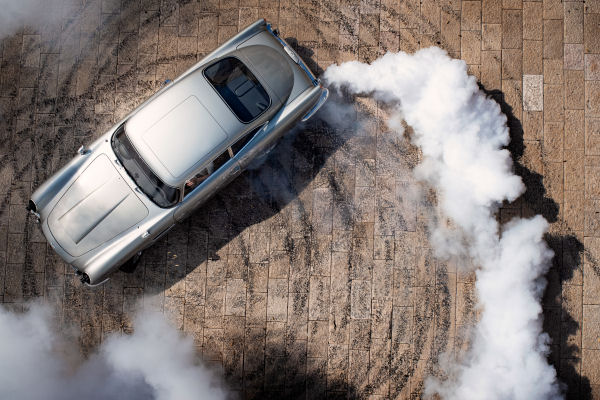 Bond is also known to drive a V8 Vantage similar to the one he drove in The Living Daylights and a photo released from the shoot in Jamaica shows Daniel Craig behind the wheel of a Land Rover Series III. 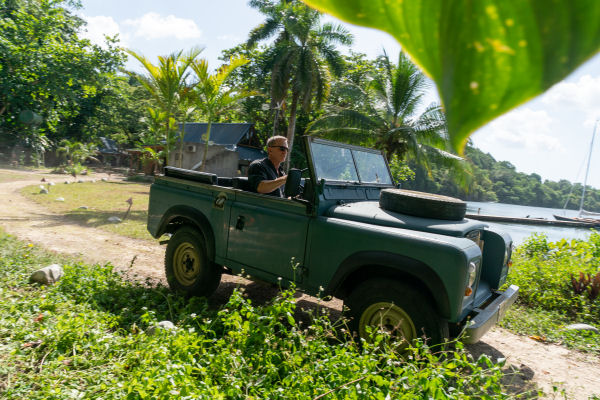 Aston Martin also supplied a DBS and Valhalla for filming. We’ll add details after the release of No Time to Die.