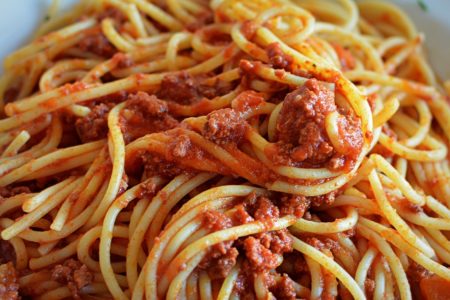 At the beginning of the novel Thunderball James Bond is sent to Shrublands health farm by M for a two week stay. Bond has just had his medical and the conclusion of the Chief Medical Officer is that he is off his peak; Bond’s steady diet of martinis and cigarettes, plus his demanding job, is taking its toll on his fitness.

After finishing his fortnight of diet, massage, irrigation and Sitz baths Bond is ready for a proper meal; or, as Ian Fleming puts it, “a passionate longing for a large dish of Spaghetti Bolognese containing plenty of chopped garlic and accompanied by a whole bottle of the cheapest, rawest Chianti” and “an overwhelming desire for the strong smooth body of Patricia Fearing”. Later we learn that Bond scored “a most satisfactory left and right of Spaghetti Bolognese and Chianti at Lucian’s in Brighton and of Miss Patricia Fearing on the squab seats from her bubble car high up on the Downs”.