In-depth look at the handguns used by 007 in the film series. 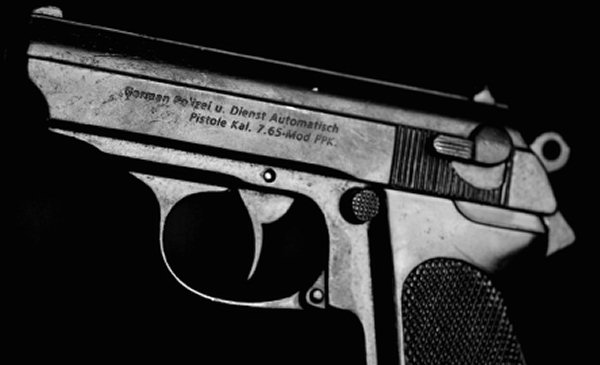 While 007 was armed with a .25 Beretta in the early books, the cinematic incarnation of James Bond used the Walther PPK  as his main weapon right from the start. While he doesn’t use the PPK in every film, he does stay loyal to Walther throughout.

Bond is armed with the Walther PPK in the first film, Dr No, although in a scene taken from the book he is first stripped of his preferred Beretta by secret service armourer Major Boothroyd. The Beretta seen briefly in M’s office is a model 1934 or similar model 1935. 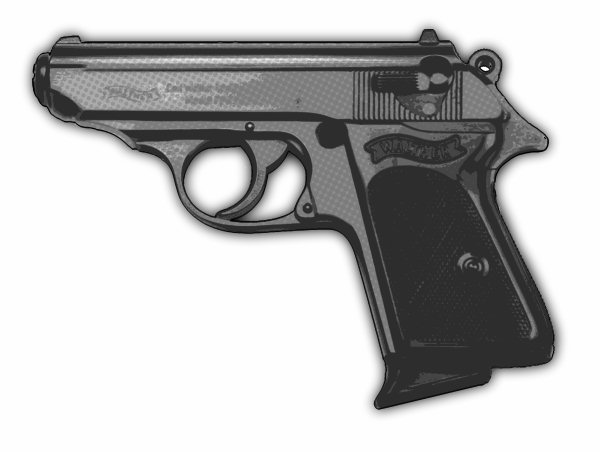 In its place Boothroyd provides what he tells Bond is a 7.65 mm Walther PPK. In fact the gun is the longer barrelled .380 ACP Walther PP, making From Russia With Love the first Bond film to actually feature a PPK on screen.

After being armed with a Walther PPK at the start of Dr No you’d think the matter was settled for the remainder of the film. So it’s rather curious to find that when he arrives at Miss Taro’s apartment, Bond is actually carrying a Browning 1910 fitted with a silencer.

In reality the gun was probably supposed to be his PPK. In 1962 filmmakers weren’t thinking ahead to the frame-by-frame analysis that we all have access to these days.

Bond has largely stuck with the PPK or the PPK/S throughout the film series. The latter is slightly heavier and holds eight rounds of 7.65mm ammunition compared with seven for the PPK. Introduced in the 1960s to comply with new US regulations, it combines the frame of the PP with the barrel and slide of the PPK.

While Bond’s gun was usually chambered for 7.65mm rounds, that isn’t always the case.

“Six bullets to your one?” Bond quizzes Scaramanga in The Man with the Golden Gun. The smaller capacity magazine suggests he is armed with the 9mm version.

While a publicity still of Moonraker features Bond in a spacesuit with a PPK, he doesn’t in fact use the gun in the film. Bond is instead equipped with a dart gun on his wrist.

After that Bond uses the PPK (or PPK/S) in all films except Octopussy, The World is Not Enough and Die Another Day. In Casino Royale (2006) Bond’s use of the Walther PPK is limited to the bathroom fight in the pre-title sequence.

Goldfinger’s men all appear to be armed with the Walther P38, one of which Bond takes from the guard when he escapes his prison cell. He is soon forced to hand it over to Pussy Galore after being found underneath the model of Fort Knox, listening to the details of Operation Grand Slam. 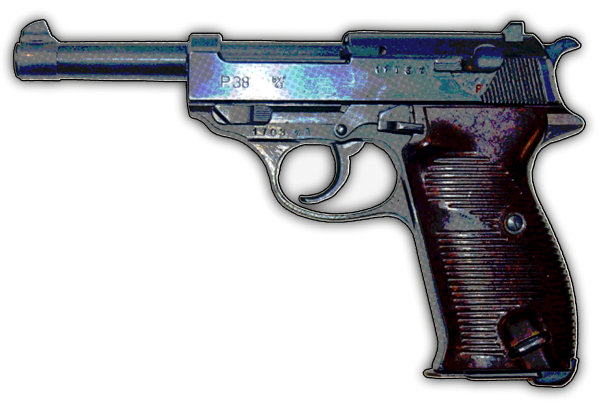 However, that doesn’t explain why Bond uses one earlier in the film. After he is forced to stop in the DB5 because of a fallen tree he raises the bullet shield and uses the driver’s door for cover while taking pot shots at his pursuers. His gun is a P38.

You could argue that it was supposed to be his trusty Walther PPK and this is what the filmmakers had to hand. But I’ll include it here anyway.

Lone Star manufactured a toy P38 in the late 1960s and 1970s. In the early 70s they offered a James Bond Super Action Set that included a P38 with 007 branding as well as a gold coloured one inspired by The Man with the Golden Gun.

For Octopussy Bond was armed with the Walther P5. But rather the change being down to Boothroyd, it was made at the request of Walther. They simply wanted to promote their newer weapon. 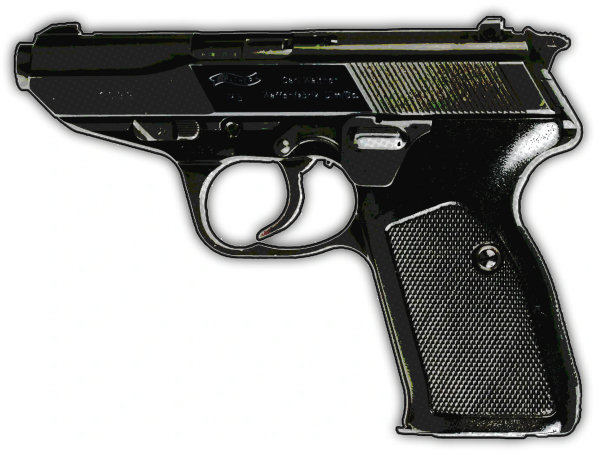 That doesn’t stop Bond from telling Q, “I appear to have misplaced my PPK” after losing his gun during the tuk-tuk chase. But watching frame by frame Bond is clearly armed with a P5.

Dating from the 1970s the P5 is an evolution of the P38 and was also used in Never Say Never Again against which Octopussy went head to head.

While the Walther PPK is Bond’s main gun throughout the series, Tomorrow Never Dies is the first of a number of films in which he uses the P99. 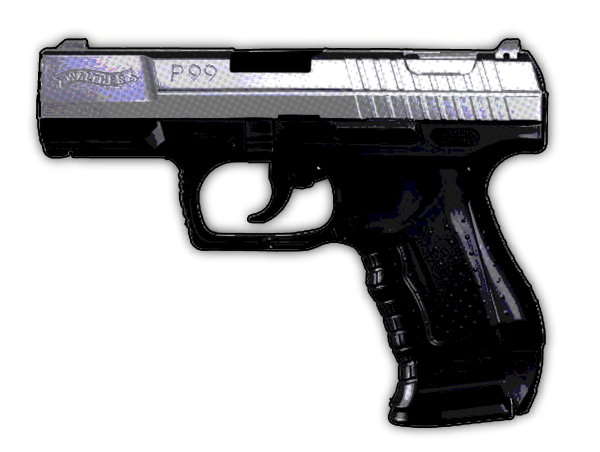 At Wai Lin’s apartment in Saigon Bond picks up a P99 from her armoury, when he tells her that he’s been trying to convince Q to get him one.

Apparently he was successful, as Bond sticks to the 9mm Walther P99 through The World is Not Enough and Die Another Day. It also appears in Casino Royale, with Bond only using the PPK in the pre-title sequence. However, with Quantum of Solace Bond switches back to his traditional weapon.

While in the films Bond almost always carries a Walther he sometimes uses other weapons out of necessity. So now it’s the turn of the other handguns in the James Bond movies.

In Live and Let Die Bond carries a Model 29 .44 Magnum revolver in a shoulder holster when he attempts to rescue Solitaire from Mr Big. It was made famous by Clint Eastwood in Dirty Harry as “the most powerful handgun in the world”. 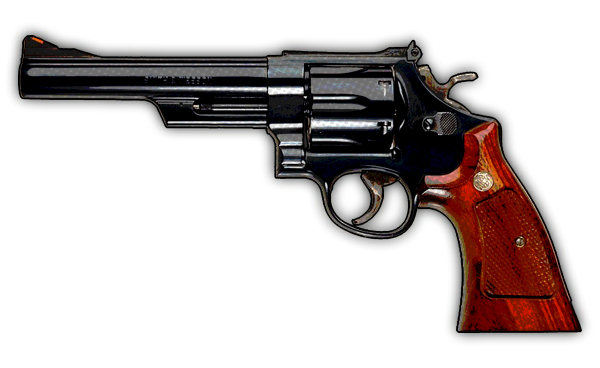 The Model 29 holds six rounds and is available in barrel lengths from 3 up to 105/8 inches. Bond’s appears to have a 61/2 inch barrel but it isn’t clear where he got it. Perhaps Felix Leiter or Quarrel Junior armed him for the mission.

When Bond infiltrates the Cuban gene therapy clinic in Die Another Day he is armed with a Smith & Wesson Model 10. 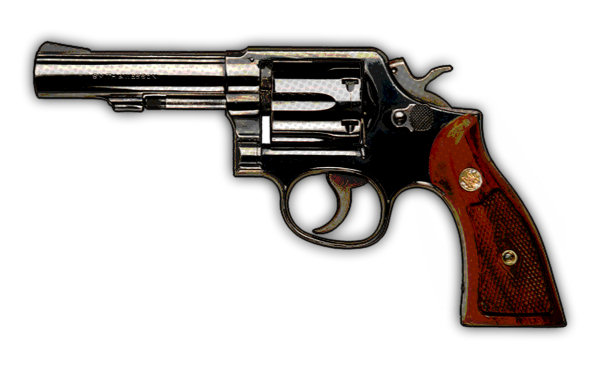 Bond borrows the .38 calibre weapon from Raoul, his contact in Havana. It looks like the version with a 4 inch heavy barrel.

In the pre-title sequence of Licence to Kill Felix hands Bond what appears to be a Beretta 92FS (or, using its US Military designation, Beretta M9). However, according to the film’s armourer it was actually a Brazilian copy of the 92FS, a Taurus PT92. 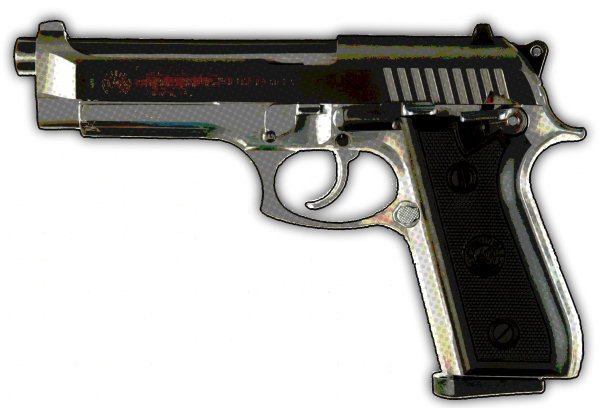 Following the purchase of Beretta’s São Paulo factory and machinery in 1980 Taurus simply resumed production of the 9mm weapon. Although the design has evolved over time, early models were an almost exact copy of the Beretta.

While Bond carries a Walther P99 in The World is Not Enough he uses the .45 Colt M1911A1 belonging to one of the Swiss bankers during the Bilbao pre-titles sequence. 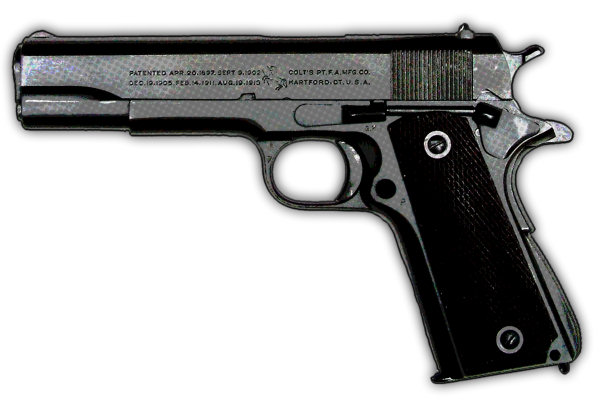 The weapon originates from a 1911 design and was the principle sidearm for the US military during World War II. Although replaced in the mid-1980s by the Beretta 92F, the Colt M1911A1 is, remarkably, still used by some military and law enforcement organisations.

Bond gets his hands on a SIG-Sauer P226 in Quantum of Solace after disarming an agent as he evades capture in his La Paz hotel. He later carries it with him to Dominic Greene’s desert eco-hotel, losing it during the showdown with Greene. 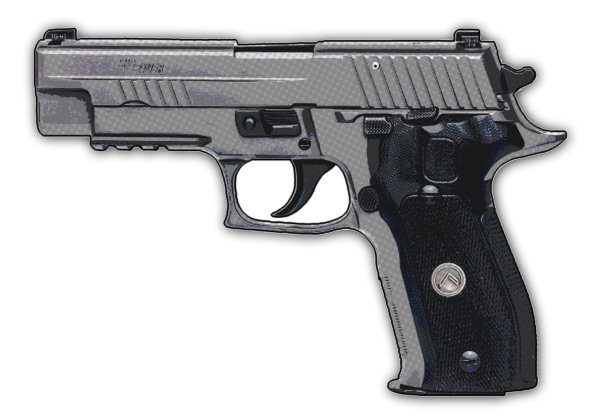 It’s a similar weapon to that used by Mitchell to kill two agents after Bond arrives in Siena with Mr White. The gun is the first collaboration between Switzerland’s SIG and Germany’s Sauer and a popular choice in the military and law enforcement.

In SPECTRE Bond intends to provide some weapons training to Madeleine Swann while travelling by train to Blofeld’s base. The gun is the P226R, with a military spec mounting rail below the barrel.

After killing General Medrano with his own elaborately decorated SIG P210 during a struggle in his room, Camille cowers as the hotel burns around her. 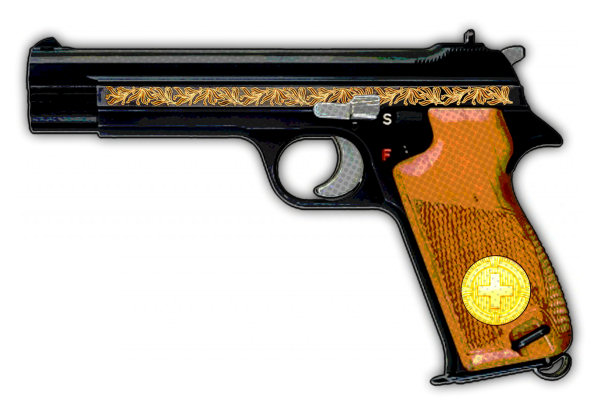 When Bond finds her he notices the gun in front of her and uses it to blast the fuel cells and exit the inferno. He is still carrying it when he leaves the injured Greene in the desert.

After Bond tracks down Silva to his island lair and is captured by the former MI6 agent, Silva forces Bond to participate in a shooting contest. Armed with Ardesa 1871 duelling pistols, the pair must shoot a shot glass of Macallen 1962 off Sévérine’s head.

The pistols were available as a set of two with accessories from Spanish specialist arms manufacturer Ardesa and based on nineteenth century duelling pistols. These are muzzle loading pistols and use a percussion cap to ignite the gunpowder.

After Silva shoots Sévérine dead in Skyfall, Bond grabs a Glock 17 from one of the heavies and kills the others. 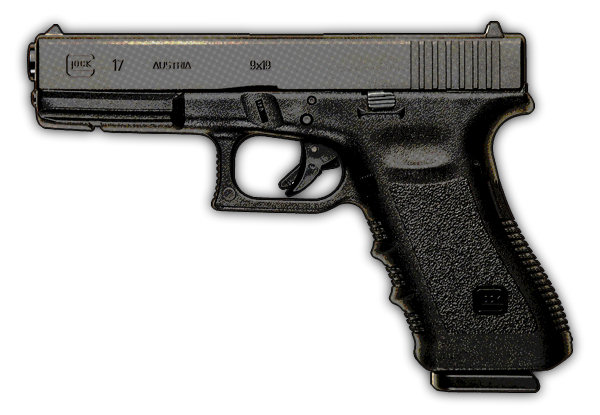 Bond then holds Silva at gunpoint as he waits for reinforcements from MI6 to place him under arrest.

The Glock 17 was designed to replace the Austrian army’s aging Walther P38s and entered service in 1982. Although not the first polymer framed design on the market – that was the Heckler & Koch VP70 – the Glock 17 was the first to be commercially successful.

After Madeleine Swann is grabbed by Hinx and his men in SPECTRE, Bond is accosted by a couple of heavies as he exits the Hoffler Klinik. 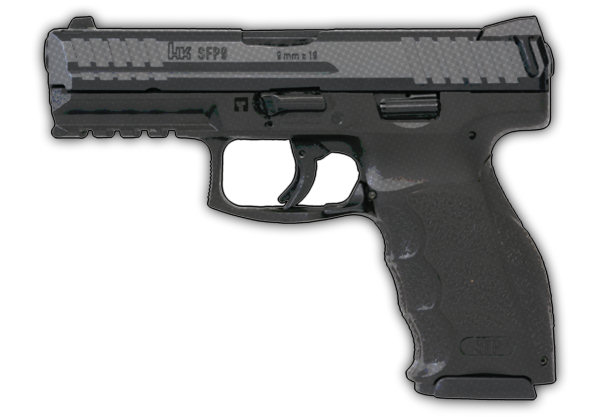 He disarms the first of a Heckler & Koch SFP9 (VP9 in the United States), which he uses to shoot the second. The polymer framed weapon was designed for the Bavarian State Police and first went into service in 2014.

In No Time to Die Bond appears to carry a Browning Hi-Power in the Jamaican scenes. 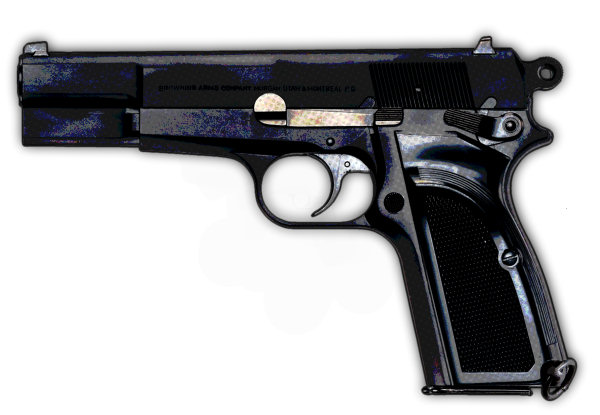 The Hi-Power is another classic pistol designed by John Browning. He was commissioned by Fabrique Nationale (FN) to design the firearm for the French military. Introduced in 1935, production only ceased in 2017.

Interestingly, the design was used by both German and Allied forces during World War II. German forces occupied FN’s production facilities in Belgium while John Inglis and Company produced the weapon in Canada after it was sent the blueprints by Britain.

The Inglis manufactured Hi-Power started production in 1944 and was popular with airborne forces and commandos, including the Special Operations Executive (SOE) which Ian Fleming had helped set up.

The Hi-Power was the British army’s standard service pistol between 1969 and 2013, when it was replaced by the Glock 17 Gen 4.