A look at the principal filming locations used for Daniel Craig’s first appearance as 007. 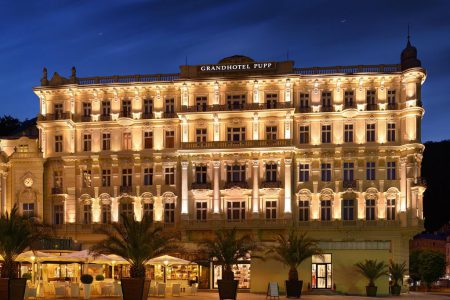 During Casino Royale (2006) James Bond travels to locations such as Madagascar, the Bahamas, Montenegro and Venice, and required a number of weeks on location in addition to studio work.

Principal photography for Casino Royale commenced on January 31st 2006 and ran all the way through to July 21st.

Zoom in for individual sites at the shooting locations

The film is one of the few in the series not to primarily shoot at Pinewood, but instead was based in Prague.

Most studio work took place at Barrandov Studios in order to cut costs. Sometimes known as the “Hollywood of the East”, the studios have been used by franchises such Mission: Impossible and Bourne.

Filming also took place at a number of locations across the city. These include exteriors of Danube House (Karolinská 650) in the black and white sequence when Bond earns his licence to kill.

After attending a meeting in the House of Commons M ends her rant to Villiers telling him “Christ, I miss the Cold War”. This was filmed in the library at Strahov Monastery (Strahovské nádvorí 1). The exteriors of the Body Worlds exhibition are the Ministry of Transport (Nábrezí Ludvíka Svobody 1222). And Prague’s Václav Havel Airport stood in for many of the Miami airport scenes.

Even the lobby of the hotel Bond and Vesper stay at while in Venice were filmed in Prague. The hotel was in fact the Natural History Museum (Václavské nám 68, Wenceslas Square).

Karlovy Vary, formerly Karlsbad or Carlsbad, is the largest spa town in the world. In Casino Royale it was used for the Montenegro scenes in which the casino was supposedly located. 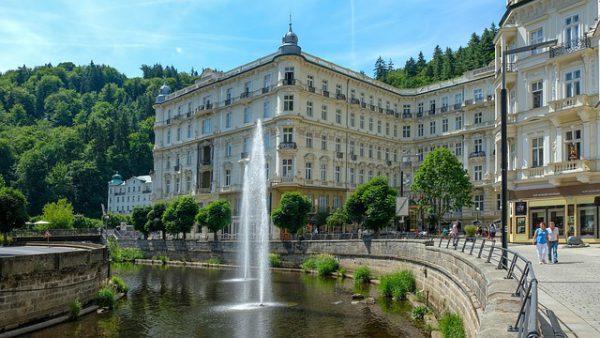 After Bond and Vesper arrive in Montenegro the station from which they are collected is in fact Mill Colonnade (Mlýnské nábř 360), within which are five of Karlovy Vary’s thirteen springs. From there they set off along the noew pedestrianised Tržiště and begin to discuss their cover story.

Hotel Splendide, where Bond and Vesper stay, is in reality Grandhotel Pupp (Mírové námesti 2) while the nearby Kaiserbad Spa (Mariánskolázeňská 2) stood in for the actual casino.

Another Czech location was the medieval town of Loket, used in the scene in which Bond and Vesper meet Mathis for the first time. These scenes were filmed in the picturesque marketplace. 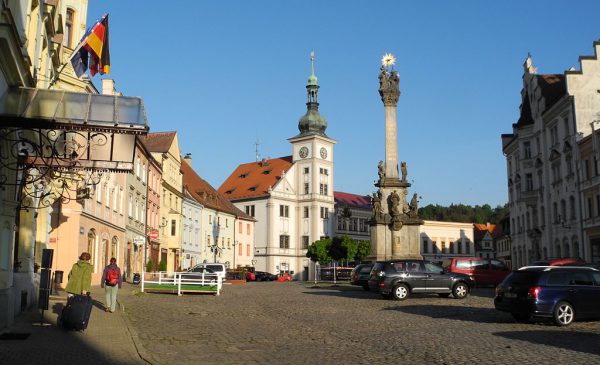 Arriving in Bond’s Aston Martin DB5 the car swings into a parking space outside a rather grand looking building. They drink at an outdoor cafe near Hotel Goethe, although the name was changed for filming. While they chat Michael G Wilson can be seen at a table behind. Until he is arrested that is.

The Bahamas have a long association with 007 with both Thunderball and Never Say Never Again filming there. After Thunderball both Sean Connery and Kevin McClory bought property there. 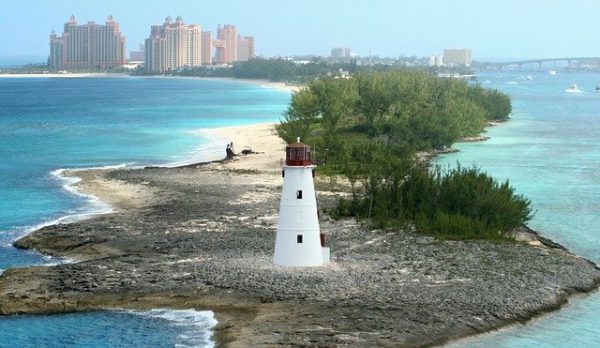 New Providence is the most populated island in the Bahamas and where the capital Nassau is located.

Filming took place at Coral Harbour in the south, which doubled as a construction site in Madagascar. A shanty town was constructed close to the shell of an unfinished hotel used in the parkour scenes. It is located within the perimeter of a Royal Bahamas Defence Force base and so generally off limits.

The scenes for the Nambutu Embassy were shot at the site of the abandoned Buena Vista Hotel on Delancy Street in Nassau. Today the building is used by John Watling’s Distillery and is considerably more colourful than it was during filming.

Another site used for filming was Albany House, now owned Ernie Els and Tiger Woods as part of Albany Golf and Beach Club. It was used as home of Dimitrios and where 007 emerges from the sea in those skimpy swimming trunks.

Around 500 metres north of Nassau is Paradise Island, reached by road bridge or ferry. Here you’ll find the Ocean Club, where Bond has a villa.

Bond walks up some steps at night on his way to encounter Dimitrios. This scene was shot in the Versailles Gardens with a swimming pool just behind the French Cloisters in the distance. At the Ocean Club’s Library Bar he bar he orders his first drink of the film.

He then wins an Aston Martin DB5 off Dimitrios in a game of poker before seducing his wife, Solange.

The film did also return to Pinewood where an elaborate set was constructed on the enormous 007 stage. However, a week after filming had wrapped the famous sound stage burned to the ground for the second time in its life. Luckily there were no casualties and the film’s schedule was unaffected.

While filming for the pre-title sequence took place at the cricket pavilion at Eton College, the footage was never used. However, scenes shot at a number of other sites across the UK were used.

The scenes in Miami with Bond out on the airport tarmac were filmed at Dunsfold Aerodrome in Surrey. The Skyfleet S570 that Bond is trying to stop being bombed by terrorists is in fact a Boeing 747 altered through CGI.

As well as appearing in Casino Royale, Dunsfold Aerodrome in Surrey is home to the Top Gear test track. Constructed in 1942, the airbase was used by the Royal Canadian Air Force and later the RAF. The airfield was also to be used during the Berlin Airlift in 1948.

Millbrook Vehicle Proving Ground in Bedfordshire was originally constructed by General Motors. It consists of several circuits including a picturesque hill route complete with gradients and tight bends; a banked high speed circular test track; and handling test circuits. The first track is constructed like a winding mountain road and was used for the stunt in which Aston Martin was rolled. The tarmac was damaged by the car flipping and the point on the track where the stunt took place is easily visible.

While the most obvious location used in Casino Royale is Venice, where Bond arrives with Vesper about a yacht, it is also where he recuperates after being rescued from Le Chiffre and provides the backdrop to Bond’s showdown with Mr White. 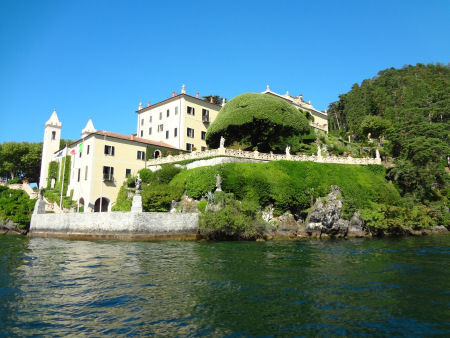 The lakeside sanatorium where Bond recovers is Villa del Balbianello (Via Guido Monzino, 1 near Lenno) at the tip of a small peninsular on Lake Como. It is a museum but check opening hours on the website. And Bond tracks down Mr White to Villa Gaeta (SS340dir, 12). It’s also on Lake Como, near the town of Menaggio. 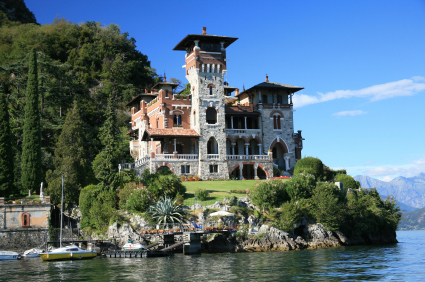 If you’re visiting Venice there are a number of Bond locations to visit near the tourist Mecca of St Mark’s Square and near the Rialto Bridge in particular but also on the island of Giudecca that lies just south of Venice. 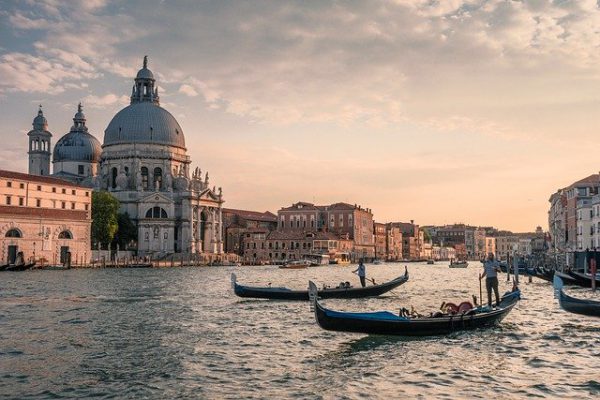 Bond and Vesper arrive in Venice aboard a Spirit 46 yacht, with some great views of the architecture in the distance. While their hotel appears to be in St Mark’s Square it turns out to be fictitious and the interiors filmed in Prague (see above).

But if you follow Vesper’s path through the city you’ll walk along narrow passageways and cross canals on dainty bridges in the maze of old Venice.