Skyfall notched up an impressive box office as the first billion dollar Bond film and was widely reported as the top grossing James Bond movie of all time. The trouble with reporting straight box office figures though is that it only tells a small part of the story. For example, when the box office takings for the other films is adjusted for inflation it tells a markedly different story. When adjusted to 2012 figures, Thunderball was a billion dollar film too.

The figures from the table below are taken from The Numbers. Throughout this article the big assumption is that figures reported on third party websites are correct; if they’re not exact, they are likely to be pretty close. This doesn’t really tell us much other than the general trend is up and that Skyfall grossed more than any other Bond film (and SPECTRE fared less well). What it fails to account for are the effects of inflation on those figures, underlined when you simply look at how the budgets have climbed over the years. To give a clearer idea of the amounts each film grossed at the box office, domestic and worldwide takings were adjusted for inflation using the US Inflation Calculator and ranked in order. This gives a very different picture of how each film performed at the box office.

On this basis Thunderball remains the top grossing Bond movie at the domestic US box office when adjusted for inflation, followed by Goldfinger and Skyfall. SPECTRE didn’t do too badly, making it to eighth place, ahead of Casino Royale but behind Die Another Day. Globally Skyfall is in the number 1 spot, perhaps due to the massive Chinese market, with Thunderball trailing slightly and then Goldfinger and SPECTRE in fourth. When you compare the ROI, the picture that emerges is very different indeed. In fact, none of the more recent films even makes it into the top half of the list. On the currently published figures, SPECTRE is third from bottom. However, it may be that the $300 million budget reported by The Numbers is revised down closer to $250 million. By using average ticket prices in the US you can determine with a fair degree of accuracy the number of people who paid to see any particular film. On that basis Thunderball remains the most popular Bond movie in the US, ahead of Goldfinger and way ahead of Skyfall, in third place. SPECTRE is mid way down the table. However, just to see what we get anyway, I’ve used the vast simplification of calculating the worldwide audience based on US average ticket prices. I’m not even sure of the magnitude of error that this creates, but be sure that the numbers are almost certainly way off. This puts the global audience of Thunderball marginally ahead of Skyfall, but in truth either could be well ahead of the other, such is the potential margin of error. By this measure SPECTRE is in fourth place, behind Goldfinger. While Skyfall‘s $1 billion worldwide box office take is impressive, making it the first ever Bond film to breach that barrier, it is a poor measure of success. When the figures are adjusted for inflation, Skyfall is in third place domestically, behind Thunderball and Goldfinger, although globally it is just ahead of Thunderball thanks to expanding markets such as China.

But in terms of Return On Investment there is one film that has never been beaten. Dr No launched the James Bond series with an incredible 5857% ROI. Compare that with Skyfall‘s 455% ROI, which looks like a failure in comparison.

This is an updated version of an article originally published on 15th July 2015. 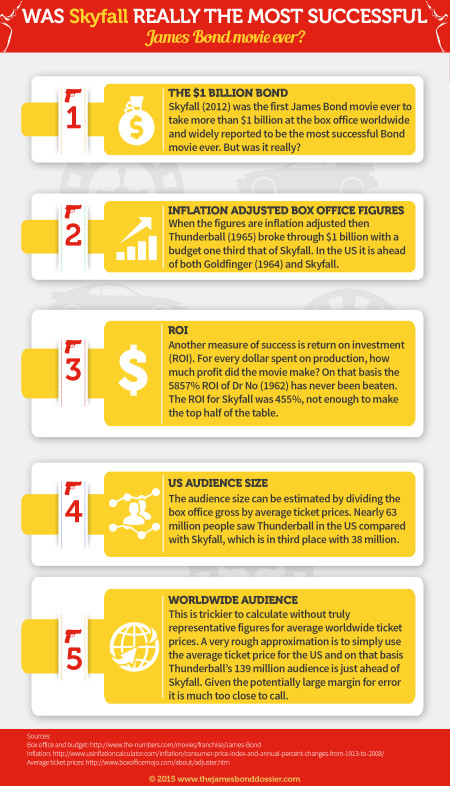