Surprised at Goldfinger’s certification in Spain, I compared the ratings of all the James Bond films with those in Britain and the United States.

Back in the summer the company that provides my internet, phone line and TV started showing the James Bond films.

For a period of a few weeks most of the Bond films were shown around the clock by Spanish telco Movistar on a “popup” channel, as well as the 1954 television adaptation of Casino Royale and the 2012 documentary Everything Or Nothing.

In addition, most of the films were also available on demand. A selection of around twenty films that included both the TV adaptation and 1967 spoof versions of Casino Royale (although not the 2006 movie) and Never Say Never Again (but not Thunderball).

I own the entire Eon Productions series so I’m not sure why I was so happy to see these available. They’re all on a media server so I can watch them any time I want. But since I had only seen the 1954 version of Casino Royale once before, I did watch that.

Now owned by Eon/MGM, the TV version now has the MGM lion at the start, but turned out to be lacking the last couple of minutes, which I had seen on my previous viewing. Strange that the “official” version of the television adaptation is also incomplete. Hopefully that will be rectified at some point though.

But when I looked at the available Bond films I was surprised to see the certification given to Goldfinger.

When I checked some more of the early films, Goldfinger was the only one I could find that had an 18 rating. It was a quick search and far from thorough.

I mentioned this on Twitter and got into a bit of a conversation about it so decided to look into the film certifications and see what I could dig up. I made a few notes at the time but only recently went back to the complete the task.

And when I looked for a second time there was something odd.

The ratings shown on Movistar are different to those in the summer. Goldfinger is still 18, but so are several other early Bond films.

Previously they had lower ratings.

After a bit of digging I found that film ratings in Spain are available on the website of the Spanish board of film certification, the Instituto de la cinematografía y de las artes audiovisuales (ICAA). From that I found the original ratings for every Eon Bond film.

I then went to Amazon’s Spanish website to check the certifications of all the Blu-Ray editions from the cover artwork. And from that I learnt that Goldfinger, You Only Live Twice, On Her Majesty’s Secret Service and The Man With The Golden Gun are currently rated 18 on Blu-Ray.

The table below shows the film certifications for all the Eon films from both the British Board of Film Classification (BBFC), the US ratings and the ICAA for both the original release and the current ratings (click to view a larger version): 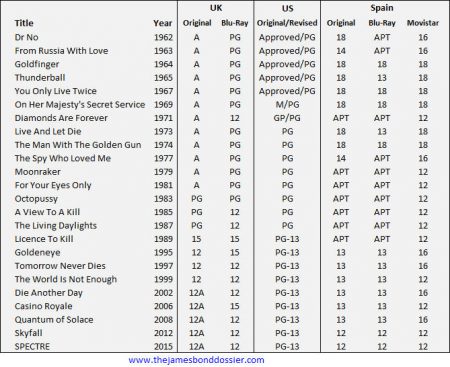 Note 1: The ICAA was created in 1985, since when it has been responsible for classifying films in Spain. APT (autorizada para todas) means a film is considered to be suitable for all. In 2010 the 13 rating was changed to 12.

Note 3: In 1968 the Hays Code was replaced by Motion Picture Association of America (MPAA) ratings. The initial rating codes changed in 1970 and were amended in 1984 when PG-13 was added and 1990 when the X rating was changed to NC-17.

I remember that when I saw Casino Royale in Barcelona there was a young girl (perhaps 10) sitting behind. During the genital bashing scene she asked her mother what was happening. Personally I felt she was too young to be watching the film and other Bond fans I’ve spoken to about this feel the same way.

It turns out though that film ratings in Spain are advisory only.

A number of the Bond films are rated APT in Spain, which means they are suitable for all. These are Diamonds Are Forever and the films from The Spy Who Loved Me all the way through to Licence To Kill.

Remember though that the latter was rated 15 in the UK due to its violence.

Now compare the classification for On Her Majesty’s Secret Service with Licence To Kill or Casino Royale, which is rated 13. The latter has much more violence, including the torture scene. And SPECTRE is rated 12 in Spain, again with a torture scene.

But when George Lazenby’s sole outing as 007 was re-classified in 2015 prior to it being shown at a special screening in Barcelona it was again given an 18 certificate. It’s completely inconsistent and makes no sense.

Originally I wanted to try and find out why Goldfinger was rated by the ICAA so harshly, when other early films were not. Instead I’ve learnt how inconsistent film classification is in Spain. Surely when On Her Majesty’s Secret Service was re-classified by the ICAA in May 2015 it should have received a less restrictive rating.

I can understand why the early films received such restrictive classifications. In the 1960s and early 1970s Spain was living under the Franco dictatorship, which had strong ties to the Catholic Church. Bond’s easy sexual conquests would have been viewed as immoral. But why are those films still rated 18, as we can see from the Blu-Ray packaging?

And why did Movistar give some of those films, although not Goldfinger, lower ratings for a period and then re-rate them?

Perhaps I have a partial answer, although it is rather cynical. According to a voluntary code adopted by Spanish TV stations, films rated 18 should only be broadcast between 10pm and 6am.

Could it be perhaps that the lower ratings were used temporarily while the films were shown on the popup channel?

But that still doesn’t answer why some of the current Movistar ratings more restrictive than the current ICAA classifications.