Diamonds Are Forever: Food and drink from the novel 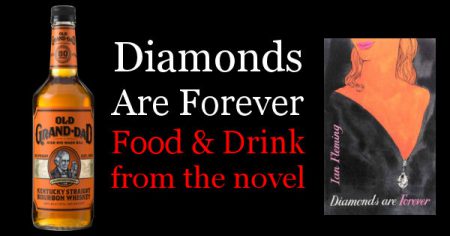 After being briefed by M on his new mission, James Bond briefly discusses his forthcoming assignment with Chief of Staff, Bill Tanner. Bond then invites him to lunch at Scotts’ for dressed crab and a pint of black velvet.

After assuming the identify of diamond smuggler Peter Franks, Bond heads to New York on a BOAC Monarch flight with diamonds smuggled inside his golf balls. During the flight between London and Shannon, he drinks an unspecified cocktail with caviar and smoked salmon canapés.

Back on the ground in Ireland for a short while, Bond dines on steak with Champagne followed by a “wonderful goblet of hot coffee laced with Irish whiskey and topped with half an inch of thick cream”. Then, after a good night’s sleep, passengers are served BOAC’s “English country house breakfast”.

While he doesn’t describe the meal, Ian Fleming describes it as an “inappropriate assortment of foods”. Quite what it consisted of is never explained, although he complains about BOAC’s breakfast in several books. If anyone has any idea I’d love to know. 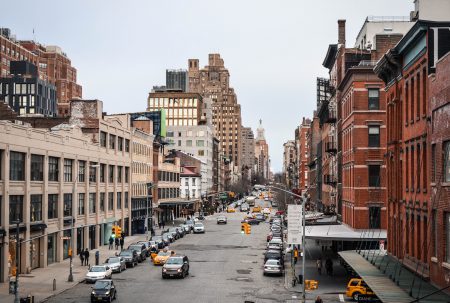 Soon after arriving in New York, Bond runs into his old CIA pal, Felix Leiter, who now works for Pinkerton’s. They go to Sardi’s for lunch, where they start with a medium dry martini with a slice of lemon peel. The martini is made with Cresta Blanca, which Leiter tells Bond is a new Californian vermouth. Bond pronounces it the “Best Vermouth I ever tasted”. After a second martini they have smoked salmon followed by Brizzola, then Bond finishes with half avocado with French dressing and an espresso.

Leiter tells Bond it is “Beef, straight-cut across the bone. Roast and then broiled”. But while it has sometimes been suggested that Brizzola was an invention of Ian Fleming, it turns out not to be the case at all:

Later that evening Bond meets Tiffany Case at the famous 21 Club for dinner, where they start with vodka martinis. Bond asks for them to “shaken and not stirred”. Tiffany quickly downs her first, followed by two more in short succession before the food arrives.

While eating caviar the waiter brings an ice cold bottle of Clicquot Rosé champagne, which to Bond seems to have the faint taste of strawberries. The caviar is followed by cutlets accompanied by asparagus with mousseline sauce. They finish their meal with coffee and Stingers made with white Crème de Menthe.

The following day is a Saturday, which he mainly spends in his hotel room writing a report for M, but heads out to Voison’s for dinner. There he drinks two vodka martinis to go with oeufs benedict and strawberries and reads the racing forecasts for Saratoga, where he is headed the following day.

Bond is picked up by Leiter in the morning in what Bond takes for a standard Studebaker. However he is amazed by the acceleration when Leiter puts his foot to the floor. Bond learns it is a Studebaker with a Cadillac engine with upgraded transmission, known as a Studillac. For lunch they stop at Chicken in the Basket where they eat scrambled eggs, sausages, hot buttered rye toast and Millers Highlife [sic] followed by iced coffee. 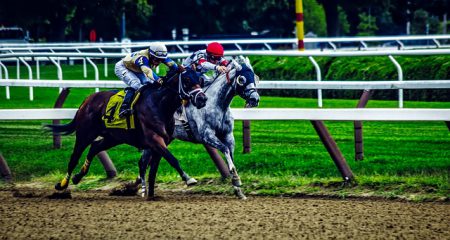 After checking into the Sagamore motel on the edge of town, Bond goes out for a chicken dinner  and two Old Fashioneds made with bourbon.

The next morning Leiter picks Bond up for an early start to watch Shy Smile’s form over four furlongs. After watching the horse’s 5:30 run – or rather, the run of a horse posing as Shy Smile – they go for an unspecified breakfast. Bond spends the day at the track, where he has lunch. In the evening, before meeting Leiter, he heads to a restaurant where he orders a a couple of bourbon and branch-waters on the advice of his friend and eats an “adequate” steak.

The following day Bond watches “Shy Smile” win the Perpetuities Stakes and, soon after, listens to the announcement of the horse’s disqualification. Leiter had agreed to pay the jockey to throw the race and Bond is to make the payment. Feeling anxious about the payoff, Bond goes to the bar for a bourbon and branch-water while thinking about how he is going to make the payment.

As it turns out, Bond had good reason to feel anxious and later, in his hotel room, he recounts to Leiter what happened while taking an occasional sip from a whisky and water. That evening they dine at the Pavilion, which Fleming tells us is “the only smart restaurant in Saratoga”. There they have “very dry” martinis, once again made with Cresta Blanca, followed by broiled Maine lobster with melted butter. During the meal Leiter’s drink mysteriously changes to a whisky.

“It’s desert where you’re going. Dry as a bone and hotter’n hell”, he warns Bond. “No rivers, so no branches to get the water out of. You’ll be drinking it with soda and then mopping it off your forehead”, he adds. 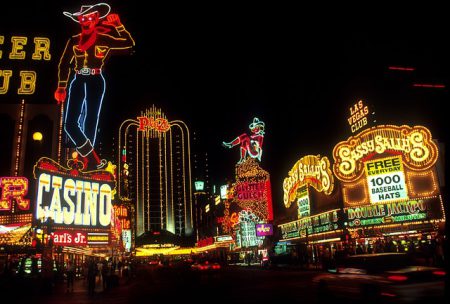 After flying into Las Vegas, Bond is collected at he airport by Ernie Cureo, who points out the highlights of the Strip as he drives Bond to his hotel, the Tiara. He has lunch in the Sunburst Room, next to a kidney/shaped swimming pool, before taking a long siesta in his “extremely comfortable” ground floor room.

Later, Bond drinks a vodka martini at the Tiara’s casino bar while he looks at the scene playing out before him. He then goes to take a look at the blackjack. Later he is due to play with a fixed deck of cards to “win” his payment from The Spangled Mob.

From there he goes to The Opal Room for dinner. Although  quickly seated, he waits ten minutes before he is attended. First a roll with a square of butter and olives and celery with orange cheese are brought to his table and shortly after he is handed the menu.

He waits ten more minutes until the waitress returns. He orders a dozen cherrystone clams and a steak and asks for another vodka martini. “The wine waiter will be right over”, she tells him. The meal is excellent. While Bond finishes his dinner with coffee, he decides he needs to do something to force the opposition into taking action.

After winning $4000 in a fixed blackjack game, Bond walks over to the bar where he orders a bourbon and branch-water made with Old Grandad [sic] and learns they do have branch-water in Las Vegas after all. In rersponse to his query the barman tells Bond the water comes in from near the Boulder Dam “by truck every day”.

The following evening, after Bond is captured by two Spangled Mob heavies, who take him to Seraffimo Sprang at his private wild west ghost town, Spectreville. 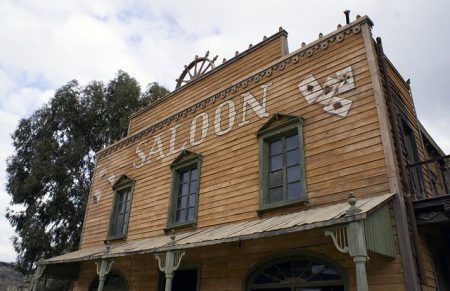 In Spectreville it turns out that not only does Spang own his own ghost town, but he also has a private railway. Once on board the Pullman coach towed by the stream train The Canonball, Spang starts to question Bond.

“I shall need a drink if we’re going to talk”, Bond tells Spang. Instructed to get him a drink, Bond asks Wint for a bourbon and branch-water, “Half and half”. Bond starts to bluff his way through the interrogation but soon learns his cover has been well and truly blown. He drains his glass as he contemplates his immediate future. 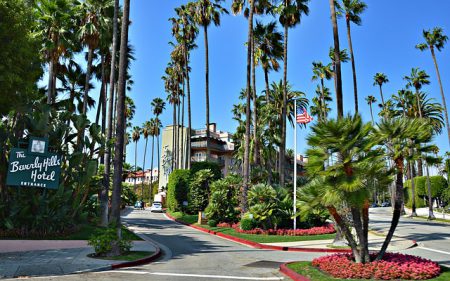 After being whisked from the desert to Los Angeles by Felix Leiter, Bond and Tiffany join the Pinkerton’s man in the bar of the Beverly Hills Hotel for martinis. Recommending they get out of the country fast, Leiter arranges passage on the Queen Elizabeth headed to Britain from New York. 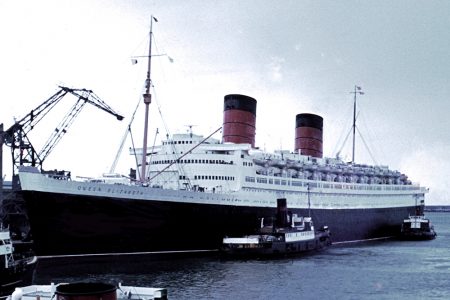 Bond and Tiffany meet for cocktails on the ship’s Observation Lounge, where Bond orders vodka martinis with lemon peel for them both. After finishing her martini Tiffany asks Bond for another drink.

She asks him to tell her “what sort of a woman you think would add to you”.

“Somebody who can make Sauce Béarnaise as well as love”, he replies.

Bond orders more drinks but Tiffany walks out on him before they arrive. Back in his cabin, Bond is surprised by a knock on the door. It’s the steward with a quarter bottle of Bollinger and steak on toast canapés with a small bowl of Béarnaise sauce.

Later, after dining at the Veranda Grill, they go to the Promenade Deck where Tiffany tells Bond she’d like a coffee and a Stinger made with white Crème de Menthe. There they watch the Auction Pool and after listening to Bond explain how the auction was just inside the law, Tiffany asks for another Stinger. As soon as Bond has orders it she tells him to have it as she wants to stay “sober as Sunday”.