Goldfinger: Food and drink from the novel 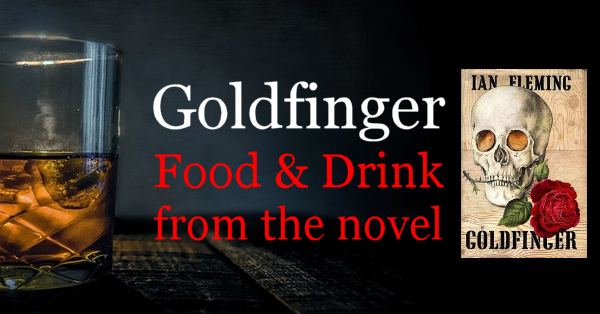 In Goldfinger’s opening chapter, ‘Reflections in a Double Bourbon’, James Bond is drowning his sorrows while he travels home from Mexico.

While waiting for his homeward flight to be called at Miami airport Bond mulls his just completed mission.

While doing so Bond orders his third double bourbon. He found the assignment rather distasteful and craves “the soft life” instead. Suddenly he’s jolted out of his thoughts. Someone has approached him, calling him by name.

It turns out to be Junius Du Pont, one of the baccarat players in Casino Royale. So when Du Pont orders a drink Bond has yet another bourbon.

After talking a while the American offers to treat Bond to dinner. He has a problem he’d like Bond to sort out.

Bill’s on the Beach

At Bill’s on the Beach they order double vodka martinis with a slice of lemon peel, with two more to come in ten minutes. After that they get stuck into stone crabs with melted butter and thick toast washed down with pints of pink champagne – Pommery ’50 in silver tankards.

Some London Clubs apparently still serve Champagne in silver tankards, and Winston Churchill would drink Pol Roger from a tankard. Pol Roger even produced special pint bottles for him.

Churchill claimed pint bottles of Champagne provided enough for “two at lunch and one at dinner”.

But while enjoying the meal Bond wonders if the soft life he thought he craved is really is for him. The puritan in him is rather disgusted by the high life. All the same he agrees to take the job offered by Du Pont – to find out how Goldfinger is cheating him at cards.

After lunch he goes to Goldfinger’s room, where his suspicions are confirmed. Jill Masterton has her eyes glued to a pair of binoculars and a microphone. She looks directly at Du Pont’s hand and passes on what she sees to Goldfinger.

Of course Bond ensures the cheating millionaire loses big time. After humiliating Goldfinger, Bond orders him over the mic to book him a compartment on that night’s Silver Meteor to New York. He also tells him to order a bottle of vintage champagne on ice and plenty of caviar sandwiches.

After finally returning to London, M gives Bond a new assignment, coincidentally an investigation into Goldfinger’s gold smuggling operation. Bond drives down to Kent, where Goldfinger owns a house, and takes a room on the top floor of Channel Packet inn.

He orders a vodka and tonic in the bar, along with two excellent ham sandwiches with plenty of mustard. He then heads for Royal St Mark’s golf course where he – accidentally on purpose – runs into Goldfinger again.

After outcheating Goldfinger during a round of golf, Bond returns to his room. While freshening up he receives a message from Goldfinger inviting him to dinner that night at his house in Reculver. Prior to leaving Bond has a large vodka and tonic with slice of lemon.

Immediately after greeting Bond, Goldfinger tells him he must go out to deal with a staff issue. He should be gone for half an hour so Bond should help himself to the drink tray.

Bond pours himself a strong gin and tonic. After deciding to snoop around Goldfinger’s house, he downs it. Later, when he hears Goldfinger returning, Bond tops up his glass. He serves himself another drink while his host cleans up before dinner.

The meal starts with curried shrimp and rice, although Bond doesn’t appear to appreciate it much. He’s relieved to learn it’s shrimp rather than the ginger cat Oddjob had been promised. The curry is accompanied by a bottle of Piesporter Goldtropfchen ’53, a Riesling. Bond approves.

Goldfinger explains to Bond he neither drink nor smokes and tells him to avoid Napoleon Brandy and gin. Bond replies that he has recently switched to vodka because of the impurities found in gin. It echoes Fleming, who did the same.

The main course is roast duckling accompanied by a “delicious claret”, the Mouton Rothschild ’47. Afterwards they have cheese soufflé and coffee.

The following day Bond is in the customs shed at Ferryfield airport, some ten miles from Folkestone. There he fits a homer to Goldfinger’s Rolls Royce Silver Ghost.

Originally named Lydd Ferryfield, the airfield is now known as Lydd International Airport or London Ashford Airport. It opened in 1954 and was used to fly cars over to Le Touquet in France.

Afterwards he heads to Rye to “a pub he knew” before returning to the airport. Bond plans to take a later flight and follow Goldfinger through France. We don’t learn what he orders but given that it’s lunch time it’s likely Bond also eats.

Bond continues on the tail of Goldfinger down through France by tracking the homer. Goldfinger stops overnight in Orléans, where he checks into the Arcades Hotel.

Bond checks into station hotel instead, because “there was plenty of room to park the car and it was better than even chances that the Buffet de la Gare would be excellent”.

In the hotel restaurant he orders two oeufs cocotte à la crème, a large sole meunière and an “adequate” camembert. Fleming tells us that it is one of Bond’s favourite meals. To accompany the meal he drinks a pint of chilled Rosé d’Anjou followed by a Hennessy’s three-star with his coffee.

The next morning he rises early and has the hotel’s café complet with a double ration of coffee. That’s what is usually known these days as a continental breakfast and consists of coffee and croissants, sometimes also with bread, toast and fruit juice.

After wrecking Tilly’s Triumph TR3 in Mâcon with his Aston, Bond tells her to buy six inches Lyon sausage, a loaf of bread, butter and half litre of Mâcon with the cork pulled and whatever she likes – she opts for the same. They continue to Geneva, where Bond leaves her at the Bergues hotel. He continues to trail Goldfinger’s Rolls on to Coppet and then heads to the local secret service office at Quai Wilson on Lake Geneva.

After checking in at the Berges, Bond heads to the Bavaria restaurant and orders Enzian, choucroute, a carafe of Fondant, Gruyere, Pumpernickel and coffee.

Enzian is a Swiss schnapps flavoured with Gentian, an Alpine wildflower.

In Alsace, France and Switzerland Choucroute (fermented cabbage, or sauerkraut) is usually served as choucroute garnie, with sausage, salted meats and potatoes.

Over his meal he wonders about Tilly and how she fitted into the picture. He then thinks about Goldfinger and the job in hand. Afterwards he returns to Goldfinger’s base in Coppet, where he runs into Tilly again. That answers part of his question. Unfortunately they are soon captured by Oddjob.

After arriving unconscious in New York aboard Goldfinger’s plane Bond wakes in a ward at Idlewild airport. He’s given a sedative though, so next thing he knows Bond is in a grey cell. When Oddjob comes into his cell, Bond orders him to bring food and a bottle of bourbon with soda and ice. He also asks for Chesterfield cigarettes and his watch.

Bond gets all he asked for. The meal was excellent although unspecified. Afterwards, while sipping a bourbon and soda, Goldfinger enters the cell. He explains his plan to raid Fort Knox.

Afterwards Bond goes to see the girl and asks her whether she’d like breakfast or lunch. She asks for scrambled eggs and coffee, which Bond demands from Oddjob. He then pours another bourbon and soda.

After the hoods’ congress Bond helps himself to “a quiet square meal of caviar and champagne”.

After foiling Operation Grand Slam, Bond awakes on hijacked BOAC plane. Once more he’s been captured by Goldfinger. Bond demands a bottle of bourbon, ice, soda water and a packet of Chesterfields from his captor. When they arrive he pours himself “a stiff bourbon”.

After disposing of Oddjob and Goldfinger Bond finds an unbroken bottle of bourbon in the wreckage of the galley. He uncorks it and takes a swig, which burns his throat.

After being rescued from the BOAC Stratocruiser ditched mid-Atlantic, Bond lies in a cabin on Weathership Charlie with a whisky. Soon Pussy Galore joins him.