For Your Eyes Only: Food & drink from the short stories

A look at the food and drinks from the five short stories found in For Your Eyes Only, the eighth James Bond book by Ian Fleming. 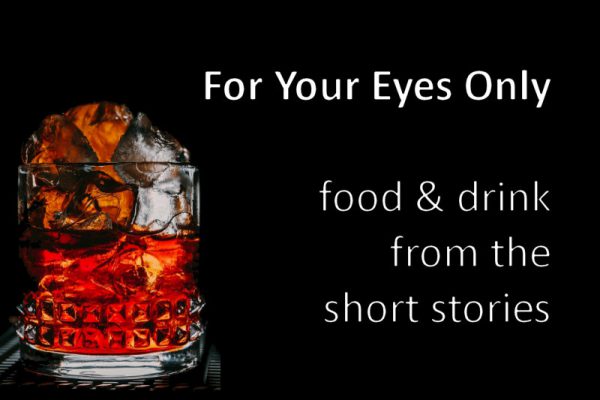 In Paris after a “dismally failed assignment on the Austro-Hungarian border”, James Bond is dreading his return to London.

Sitting at an outdoor table at Fouquet’s, he orders an Americano. He considers it “the least offensive of the musical comedy drinks” served in cafes and stipulates Perrier because he considers expensive soda water is the cheapest way to improve a poor drink.

There he daydreams about his plans for the evening when he intends to give Paris one last chance. He hasn’t enjoyed being in Paris since 1945.

We learn that Bond usually had lunch at “Café de la Paix, the Rotonde or the Dôme”, headed to Harry’s Bar for a solid drink and because that’s where he went on his first visit to the city aged sixteen on the night which he also lost his virginity. For dinner it would be Véfour, the Caneton, Lucas-Carton or the Cochon d’Or, all of which he considered had “somehow avoided the tarnish of the expense account and the dollar”.

However, Bond’s drink is interrupted when a blonde sits down at his table. Mary Ann Russell quickly introduces herself then tells him “crash dive”. He’s wanted by Station F and it’s an emergency.

Bond is briefed by the local station chief about the disappearance of a British motorcycle dispatch rider assigned to SHAPE (Supreme Headquarters Allied Powers Europe).

Bond is sent to SHAPE’s HQ to investigate. After meeting Chief of Security, an American named Colonel Schreibe, Bond is shown to his room as well as the bar and canteen. Unfortunately we don’t learn what he eats or drinks.

Four days later and Bond is in a forest to the west of Paris. He is watching a glade from a thick oak branch and dressed in green, brown and black camouflage. It is six-thirty in the morning and time for a breakfast consisting of a glucose tablet. He makes it last as long as possible then follows with a second.

The sacrifice was worth it though as the mission is a success. The story ends as Bond asks Mary Ann to go out to dinner the following night.

“Some place like Armenonville. Pink champagne and gipsy violins”, he tells her.

Flying to Montreal aboard the Comet, Bond longs for the old days. While we don’t learn what Bond eats or drinks on his Montreal flight he recalls the Stratocruiser to be much more leisurely. He was able to have a peaceful dinner, seven hours sleep in a comfortable bunk and the following morning going down to the lower deck for the “ridiculous” BOAC country house breakfast while the sun came up.

Staying at a motel outside Montreal, Bond equips himself for the trip across the border into Vermont. He buys glucose tablets, smoked ham and bread to make sandwiches, and a large aluminium flask. He fills this with three-quarters bourbon to a quarter coffee.

After making the overnight trek into the USA Bond once again finds himself lying along a branch at sunrise. He is there staking out the country house at which a German heavy is staying. Bond is there as a favour to M after the German, Von Hammerstein, had his friends killed at their house in Jamaica.

Soon afterwards he runs into Judy Havelock. He offers her his flask of “firewater and coffee” and tells her he has biltong.

After providing covering fire for Judy after she puts an arrow into Von Hammerstein’s back, Bond finds her under a maple tree. She’s bleeding from a bullet wound in her arm. Removing the shirtsleeve with her knife, Bond washes the wound clean using the bourbon/coffee mix. He then binds a thick slice of bread over the wound before the trek back over the border.

The third story collected in For Your eyes Only barely features James Bond at all. At the end of a mission to stop gun running via Jamaica Bond is in Nassau at a rather dull dinner hosted by the Governor of the Bahamas.

The whole evening has bored Bond but he knows he must see a hour more of the evening out out of politeness. When the Governor offers to tell him a story and sensing the Governor’s tone has “gained a spark of life”, Bond enthusiastically asks him to continue.

He immediately asks permission to have more brandy and pours himself an inch.

Halfway through the story the Governor pours them both a whisky and soda before lighting himself a cigar and finishing the story.

Arriving at the bar at Rome’s Excelsior hotel Bond immediately identifies the table of his contact. Although Kristatos is not there Bond sees a tall-stemmed glass with the Alexandra cocktail used as a recognition signal. Beside the glass are a saucer each of olives and cashew nuts. Seating himself at the table Bond orders a Negroni with Gordon’s gin and waits for his contact.

Later that evening the two men dine at the Albergo Colomba d’Aro off the Piazza di Spagna. Telling Bond that he doesn’t eat much at night, Kristatos orders melon with proscuitto ham and chocolate ice-cream. He also recommends the house Chianti.

Bond starts with a large glass of Chianti and a bread roll with “deep yellow butter”. For the main he orders “Tagliatelli Verdi with a Genoese sauce which Kristatos said was improbably concocted of basil, garlic and fir cones” – in other words pesto. They finish with coffee.

The next day Bond is aboard the streamlined Laguna express, which Fleming tells us us the “best train from Rome to Venice”. It “leaves every day at midday” but “looks and sounds more luxurious than it is”. The staff in the restaurant car “suffer from the disease that afflicts their brethren in the great trains all over the world – a genuine loathing for the modern traveller and particularly for the foreigner”. Bond has an aisle seat over the axle of the carriage and as the train bumps along he reads a book and spills Chianti.

In Venice Bond stays in the best double room on the first floor of the Gritti Palace as he spends lavishly to establish his cover as a wealthy writer. He heads to Harry’s Bar, Florian’s and upstairs at Quadri before heading back to his hotel. Alas, Fleming fails to mention what he eats or drinks. The next day though he heads to Florian’s again where he orders an Americano.

After being captured by Colombo Bond dines with his host. He pours himself a whisky and soda from a trolley where there are “the finest” Bologna sausage, olives, bread, butter, Provelone cheese and fresh figs. “Peasant food”, Colombi tells Bond, “but good”. Colombo tucks into the meal as he explains himself, although it isn’t clear if Bond has anything except his drink.

The next morning at five the crew fortify themselves prior to the operation with mugs of coffee and rum. All twelve are armed with Lugers and flick-knives.

Back on the boat after the successful conclusion of the operation they have breakfast as Colombo updates Bond on all that has happened. They are served a “mound of fried eggs and bacon” with “hot sweet coffee laced with rum”.

Bond is in the Seychelles to assess security in case a new fleet base is sited there. After finishing the job Bond has a week to wait before he can depart by boat so spends his time snorkelling.

Knowing that Bond has time to kill his local contact, Fidele Barbey, asks him to help. He has been hired by an American millionaire find a particular fish. It is known as the Hildebrand Rarity and only one has ever been caught before.

Aboard Milton Krest’s luxury yacht, the Wavekrest, Bond immediately takes a dislike to Krest. It can’t have helped that when Krest takes Barbey to the bridge he tells Bond to help his wife fix “canapés and so on” for pre-lunch drinks. But while Krest drank three double bullshots and then beer with lunch we don’t learn what 007 had. And it takes two days to reach Chagrin island so there would have been many drinks and meals consumed on board before they get there.

On the small coral island with dazzling white sand and, with many varieties of bird, a strong smell of guano. Krest orders his men to erect a tent while Bond and Barbey begin their search for the fish. Swimming in opposite directions they circle the island without luck. Back in the tent they eat chicken salad with beer while Krest borrows a facemask. Within fifteen minutes he has found the fish.

In an act inspired by an event witnessed by Ian Fleming, Krest appalls Bond by poisoning the water in order to capture the fish. Bond watches as thousands of sea creatures die around him.

That night back on board the Wavekrest they celebrate with caviar and pink champagne. Krest gets extremely drunk on whisky as Bond does his best to wind him up. That night, as Bond sleeps on the deck, he hears Krest snoring on the deck above him.

Later he hears him choke. When he goes to investigate Krest is dead with the tail of the fish protruding from his mouth. Wondering whether Krest’s wife or Barbey killed him, Bond pushes Krest overboard.

The next morning he fixes an unspecified breakfast for himself.

Read more about James Bond’s food and his drink.