Thunderball: Food and drink from the novel 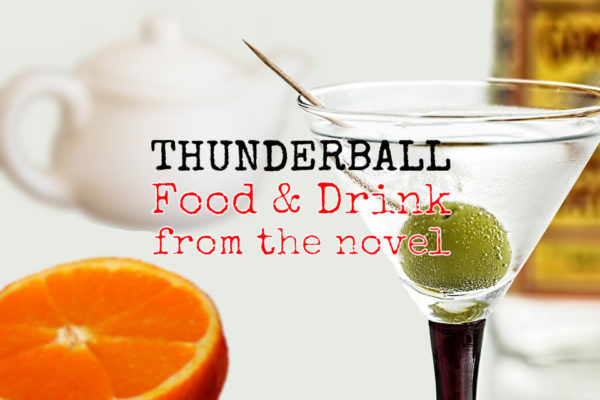 At the start of Thunderball we find a badly hungover James Bond. The previous night while playing bridge he had downed a total of eleven whisky and sodas and, blaming it firmly on that last drink, lost heavily. After downing two Phensics he reaches for the Eno when the phone in his bedroom rings. It’s a direct connection with HQ.

But when M calls him into his office it’s not for a mission. Instead M has Bond’s most recent medical report on his desk in which we learn that Bond smokes 60 high-nicotine cigarettes every day and drinks around half a bottle of spirits of 60 to 70 proof – that’s 34% to 40% alcohol by volume. As a result he suffers frequent headaches, his liver in unpalpable, he has a spasm in the trapezius muscles, and fibrositis nodules can be felt.

The report concludes with Medical Officer recommending two or three weeks of “a more abstemious regime” in order for Bond to return to full fitness.

When M starts talking about stoneground whole wheat, yoghurt, raw vegetables, nuts and fresh fruit and naturopathy Bond wonders if his boss is going senile. But he also notices that M seems to be fitter than he had ever seen him.

That’s when M lets Bond know that he is booked into Shrublands for two weeks. “Near Washington in Sussex”, he tells Bond.

Shrublands is a health clinic based on Enton Hall in Surrey, where Ian Fleming stayed in 1956.

While there he survives on a breakfast consisting of an orange “carefully sliced into symmetrical pigs by some ingenious machine” and a glass of hot water. Following breakfast are the treatments, a mug of vegetable soup for lunch followed by a siesta, two cups of tea with brown sugar at 4 pm, and more soup for dinner.

He is also allowed to nearby tearooms, presumably in Washington, where he drinks tea with piles of brown sugar. While Bond usually abhors tea, here he decides three cups of tea has about the same intoxicating effect of about half a bottle of champagne in the “real life” outside world. It does him some good though as he is unable to remember when he last felt so well. He does wonder if he is losing his identity though and wonders if he’ll join the “H-bomb marchers”.

No wonder he craves a “large dish of Spaghetti Bolognese containing plenty of chopped garlic and accompanied by a whole bottle of the cheapest, rawest Chianti”.

After hearing Bond making a phone enquiry about him, another guest, Count Lippe, decides to teach Bond a lesson. One of the treatments prescribed to Bond is a motorised traction table, more familiarly known as “the rack”. On his third day at Shrublands Bond is on the rack when Lippe turns the dial right up. He is only saved when nurse Patricia Fearing finds him unconscious and turns the machine off.

Given the task of helping Bond recover, Fearing is told he needs “rest, warmth, and effleurage“. When he comes round he finds himself face down on his bed as she massages him with a mink glove. She asks how he is feeling.

“Wonderful”, he tells her, before explaining he’d be even better for a double whisky on the rocks.

Explaining that her boss, Mr Wain, had recommended dandelion tea for him, she tells him that she had brought brandy with her and there was plenty of ice. After downing his brandy he immediately asks for a refill. After a couple of days he’s back to the regular Shrublands routine. Or, as Ian Fleming describes it “back in the half-world of the nature cure”.

At the end of his stay at Shrublands – after exacting his revenge on Count Lippe – Bond takes Patricia Fearing out for dinner at Lucien’s in Brighton. That night he sates his desire for both Spaghetti Bolognese with Chianti and Patricia Fearing.

Following his return to London Bond is a reformed man. After ten days back home “he had never felt so well in his life. His energy had doubled. Even the paper work he had always found an intolerable drudgery was now almost a pleasure”. That’s why we find him eating goats-milk yoghurt and Energen rolls with back treacle instead of his boiled egg and toast breakfasts. He’s cut down to just ten cigarettes a day and switched to Duke of Durham king-size in place of his preferred filterless Morlands, as they have less tar and nicotine.

His Scottish housekeeper, May, is unimpressed by his new healthy habits telling him “It’s not my place to say it, Mister James, but ye’re poisoning yersel'”.

After Count Lippe’s attempt on his life outside headquarters, Bond returns home before setting off to The Bahamas. Immediately he tells May “You were right. I can’t do my work on carrot juice” and asks her to prepare him four scrambled eggs with four rashers of American hickory-smoked bacon, hot buttered toast (not whole-meal), a big pot of double strength coffee and the drink tray.

The first time we encounter Bond in Nassau is when he meets Domino while buying cigarettes. The tobacconist is the Pipe of Peace on Bay Street, which was opposite the still remaining Royal Bank of Canada. She accepts his offer of a drink and drives them to Gunpowder Wharf where, noting that it is exactly midday, asks for a soft drink – to Bond’s surprise it’s a double Bloody Mary with plenty of Worcester sauce. He orders a vodka and tonic with a dash of bitters. While waiting they talk about island life and the aging population. Bond suggests they both try conch chowder to see if it lives up to its reputation as a aphrodisiac.

Bond has checked into the Royal Bahamian hotel, “a large old-fashioned hotel to which had recently been applied a thin veneer of American efficiency and tourist gimmicks”. After meeting Felix Leiter at the airport they drive to the hotel. Felix explains to Bond how he has been drafted in by the CIA from Pinkertons because of the emergency.

After Felix checks in they go up to his room and order double dry martinis on the rocks. They then order lunch from the room service menu. Bond goes for Native Seafood Cocktail Supreme followed by Disjointed Home Farm Chicken, Sauté au Cresson while Felix has Baltic Herring in Sour Cream and Chopped Tenderloin of Beef, French Onion rings. After ordering they complain about the pretentiousness, fakeness and misleading descriptions of tourist menus.

Sitting on the balcony, Bond brings Leiter up to date with another double dry martini.

But lunch isn’t much of a success and turns out to be “badly cooked rubbish”.

“This is hamburger and bad hamburger”, Felix tells Bond. “The French onion rings were never in France, and […] they’re not even rings. They’re oval”. He asks Bond about their next move.

“The major decision is to eat out in future”, Bond replies. He then tells the CIA man that they should visit Largo aboard the Disco Volante immediately. He asks Leiter to bring his Geiger counter.

Renting the hotel’s motorboat they arrive at the Disco Volante, moored off the southwest of the island. Largo invites them on board, offering them a choice of drinks. Quite uncharacteristically – perhaps they’re feeling those lunchtime double dry martinis – they both ask for plain tonic.

On the trip back to their hotel they discuss what they had seen. Back at the hotel Bond finds a telegram from M asking him to provide an update. Felix tells Bond he’ll meet him later in the bar for “a dry martini that’s half a jumbo olive” as they go their separate ways.

Bond writes and enciphers a report for M before heading to Police HQ to send it. When he arrives he finds Felix already there cursing a long message he needs to decrypt. Bond pops into Commissioner Harling and fills him in on his progress, thoughts and plans.

Then he returns to his hotel for a shower, followed by a double bourbon old-fashioned and a nap. At 9pm he is woken by a call from Felix, who is waiting for him in the hotel’s Pineapple Room. As soon as he arrives Felix orders dry martinis.

“I asked for a martini and not a soused olive”, he tells the barman after calling him over and giving a lesson in bar economics. He asks for two large dry martinis without olives and slices of lemon peel to be served separately.

Bond and Leiter are provided with membership cards for the casino. At the bar they drink coffee and stingers before Bond joins Largo at the Chemin de Fer table. After beating him Bond offers to buy Domino a drink. They order a bottle of Clicquot rosé and $50 worth of Beluga caviar.

It’s all go as Largo and his men prepare to set sail. Bond and Leiter make plans to rendezvous with a submarine sent to assist them, the USS Manta. Bond returns to his hotel room and orders a club sandwich and double bourbon on the rocks. First he calls the police commissioner for the latest intel and then Domino, who has left a message for him. They arrange to meet for a swim before she departs with Largo.

When he arrives at the beach there is no sign of her but while drying off after a swim she appears from the sea with scuba gear. She needs his help as she has sea-egg spines in her foot. In removing them with his teeth he gives the chapter its name: How to Eat a Girl. Afterwards they make love but breaks the spell when he tells he that her brother, Giuseppe Petacchi, was killed by Largo. He was instrumental in the theft of the two atomic bombs.

Aboard the Manta Bond and Leiter receive the news that the Disco Volante set sail that evening. They make plans with the captain, who afterwards leads them to the mess area.

For dinner Bond orders poached eggs on rye toast and coffee but has no appetite. He drinks a glass of iced water and when the meal comes only pecks at his food before pushing it away. While Fleming doesn’t tell us what Felix orders, Captain Pederson has baked Virginia ham with red-eye gravy followed by apple pie with ice cream. He also has iced coffee.