The Spy Who Loved Me: Food and drink from the novel

Although the book is short on food, drink, and 007 himself, it does at least include James Bond’s staple dish. 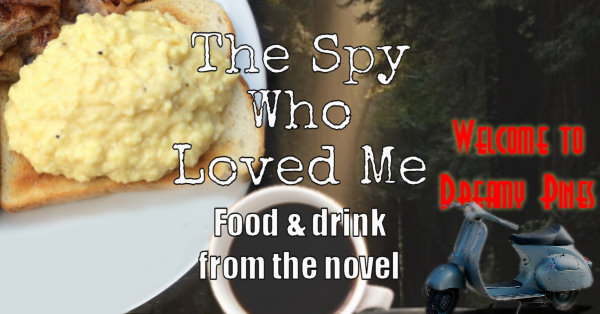 The Spy Who Loved Me is unlike any other of Ian Fleming’s other James Bond adventures in one important respect. It is written from the point of view of the French-Canadian female protagonist, Vivienne Michel.

Apart from featuring a firm Fleming favourite it lacks the normal food-and-drinkmanship of the other Bond novels almost entirely.

By the time James Bond appears in the story, at a motel in the Adirondacks, we are two-thirds of the way in. And when he does arrive Bond is kept busy trying to save himself and the girl from two gangsters. There is little time to eat or drink.

Prior to that point Viv gives her account of arriving in England to attend finishing school, then her love life and heartbreaks in London. After several bad experiences with men she decides to buy a Vespa motor scooter and drive down from Quebec to Florida, exploring as she goes. Once in Florida she will decide what to do next.

Although she is over the border a day after leaving Quebec, she then spends the next fortnight taking her time to explore the Adirondacks in full. Finally she finds herself at Lake George, “the dreadful hub of tourism in the Adirondacks that has somehow managed to turn the history and the forests and the wildlife into honky-tonk”. On a rainy night she checks into the the Dreamy Pines Motor Court.

Although almost deserted, the motel’s manager offers her the job of receptionist for the two weeks prior to the winter shutdown. Needing the money, she accepts. And except for the last day, when the manager and his wife depart, it is mainly trouble free.

She remains at the Dreamy Pines to hand over the keys to the owner, Mr Sanguinetti. But when Sanguinetti’s two men arrive to close up the motel she begins to fear for her safety.

She cooks them scrambled eggs and bacon while she assesses her situation, breaking eight eggs into a bowl and beating them with a fork before cooking them with melted butter and serving them still soft as instructed. Very much like Scrambled Eggs James Bond in fact.

She serves the eggs with a pile of toast done in a Toastmaster and Maxwell House coffee but while they are eating she runs from the motel. When they realise she is trying to escape the two gangsters leave their meal to find her. Once captured, they beat her.

After showering and freshening up she is forced to make them scrambled eggs, bacon and coffee again, cooking enough for herself too. But luckily she has forgotten to turn off the motel’s vacancy sign and the three of them are startled to hear the buzzer on the front door sound. James Bond finally enters the story.

The reason Bond has stopped is simple. His hire car, a Ford Thunderbird, has suffered a puncture and he wants a room for the night. Although initially reluctant, the hoods agree to let him stay. However, Viv does manage to communicate her predicament to Bond and, while retrieving his suitcase from the car, warns him that the pair are armed and dangerous.

He asks Viv for eggs and bacon with coffee, telling her he’ll cook them himself. Relieved to have someone else around, she cooks them anyway. He devours the meal hungrily, so she serves more coffee and jam to finish his toast with. Afterwards Bond explains what he’s been up to and, finishing the story, asks for more coffee. While she makes it he takes two white pills from a bottle. “Benzedrine”, he explains, to keep him awake overnight.

And that is the extent of James Bond’s food and drink in The Spy Who Loved Me. Just scrambled eggs and bacon with toast, some jam, several cups of coffee – and a couple of Benzedrine tablets.