Live And Let Die: Brands from the novel 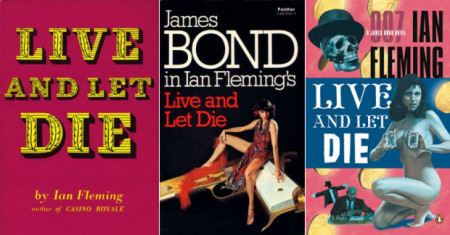 Bond drives his Bentley to the office for an early morning meeting with M. Fleming describes it as “the 1933 4 ½-litre with the Amherst-Villiers supercharger”.

After exhausting his supply of Morlands, Bond switches to King Size Chesterfields.

After being Americanised by the FBI most of Bond’s belongings are forwarded to Jamaica. However, he keeps his Beretta .25 with the skeleton grip and chamois leather shoulder-holster. Later he carries it under his wetsuit when he dives to the Isle of Surprise.

Bond’s battered Ronson is replaced by a plain Zippo lighter.

The FBI provide a light-weight Hartmann ‘Skymate’ suitcase. The company was founded in 1877 and continues to produce luxury suitcases today.

Bond wears a tie-clip from Swank. The company has been in existence since 1897 and continues to provide men’s jewellery, belts and leather accessories.

He is supplied with an alligator-skin billfold from Mark Cross, a company founded in 1845.

Fleming mentions Rolex for the first time. Although he dives with it there is no suggestion it is a Submariner, as worn in the early films.

Bond asks Strangways for the Admiralty to send various equipment, including a couple of harpoons gun supplied by French manufacturer Champion.

He also asks for a commando dagger. When it arrives Fleming notes “it is of the type devised by Wilkinsons during the war”. This is the Fairbairn–Sykes fighting knife, also referred to as the British Commando knife.

To go with a huge lunch with Captain Dexter of the FBI and his CIA contact Felix Leiter, Bond drinks what Leiter tells him is “as good a Liebfraumilch as you can get in America”.

On the Silver Phantom from New York to St Petersburg  Bond orders chicken sandwiches for himself and Solitaire accompanied by Old Fashioneds made with Old Grandad bourbon.

Bond also orders Sanka coffee for them. He orders this popular brand of decaffeinated instant so they can sleep on the train.