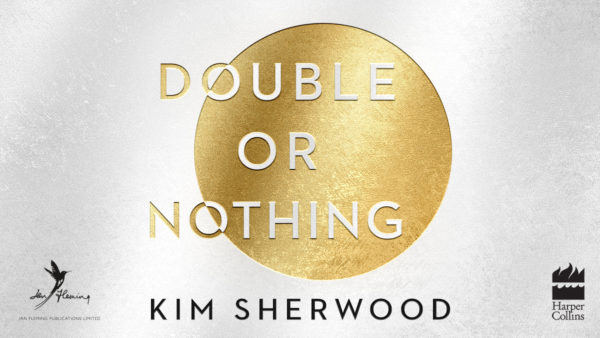 Back in early November Ian Fleming Publications announced a new trilogy of books focusing on new recruits to the double O section. Written by Kim Sherwood, the forthcoming series mark a move away from James Bond continuation novels. Instead 007 is has gone missing and possibly dead.

This week Ian Fleming Publications included more information about the first book in the series, which will be titled Double or Nothing. As well as the title reveal, a plot brief synopsis is included as well as updated artwork:

The start of a brand new trilogy following MI6’s agents with a licence to kill, that blows the world of James Bond wide open!

James Bond is missing…
007 has been captured, perhaps even killed, by a sinister private military company. His whereabouts are unknown.

Meet the new generation of spies…
Johanna Harwood, 003. Joseph Dryden, 004. Sid Bashir, 009. Together, they represent the very best and brightest of MI6. Skilled, determined and with a licence to kill, they will do anything to protect their country.

The fate of the world rests in their hands…
Tech billionaire Sir Bertram Paradise claims he can reverse the climate crisis and save the planet. But can he really? The new spies must uncover the truth, because the future of humanity hangs in the balance.

Time is running out.

Double or Nothing will be published in September 2022 in the UK and is available to pre-order from Amazon: