A blue plaque was yesterday unveiled on John Barry’s childhood home in Yorkshire. 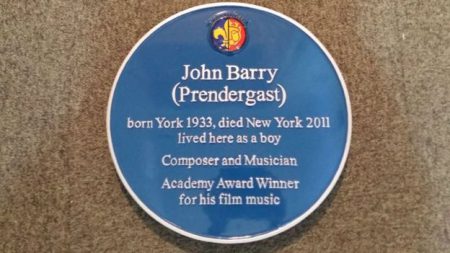 Barry was born in York in 1933 and lived in what is now the York Pavilion Hotel in Fulford. Following his hugely successful arrangement of Monty Norman’s “James Bond Theme” for Dr No (1962), Barry was hired to write the soundtrack for From Russia With Love the following year.

His music for the film started to create the unmistakable sound of the early Bond films, which distinctively featured strings and brass, while his theme song for Goldfinger remains the gold standard by which all subsequent Bond themes are judged. His work undoubtedly helped the Bond series become a colossal success.

Despite being best known for his work on the series, none of his five Oscars for film soundtracks was for a Bond film. He won two Oscars for Born Free, and one each for The Lion in Winter, Out of Africa and Dances with Wolves. 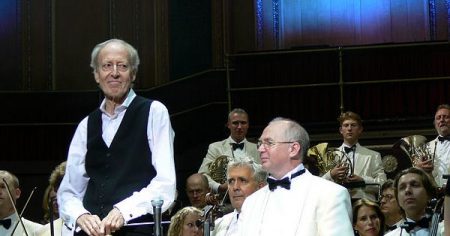 John Barry at the Royal Albert Hall in 2006. Derived from original photo by Geoff Leonard. Licenced under CC BY-SA 1.0.

The blue plaque was erected by York Civic Trust, an organisation dedicated to protecting and enhancing York’s architectural and cultural heritage. Founded in 1946, York Civic Trust has put up over a hundred information plaques to the places and people of York and continues to do so today in collaboration with its City Enhancement Fund.

Thanks to Mark Ashby for the heads up.