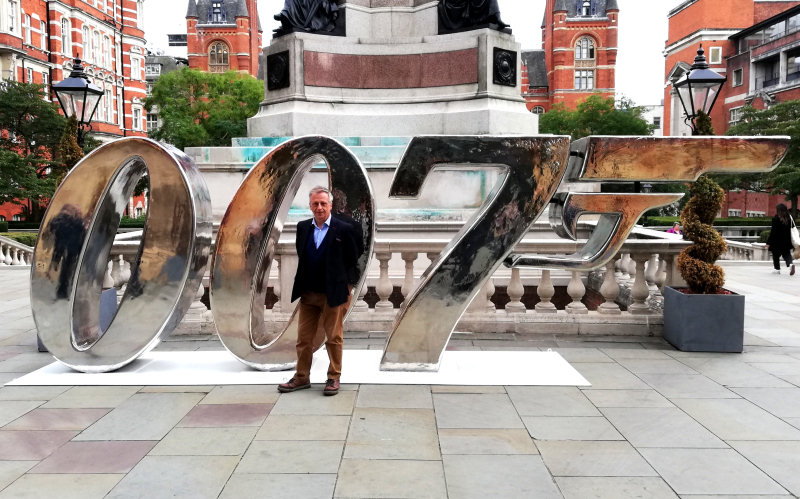 From the moment Shirley Bassey walked on stage at The Royal Albert Hall to a standing ovation I knew this was going to be a great evening, one of glitz and glamour far away from the predictable mundaneness of ‘normal’ life. And this was before she had even started to sing.

We were then treated to her superb delivery of Diamonds Are Forever and Goldfinger proving that at 85 she can still hit the notes and project her powerful voice with the style we have revelled in for decades. Instantly, we were taken back to the world of Bond on the big screen. 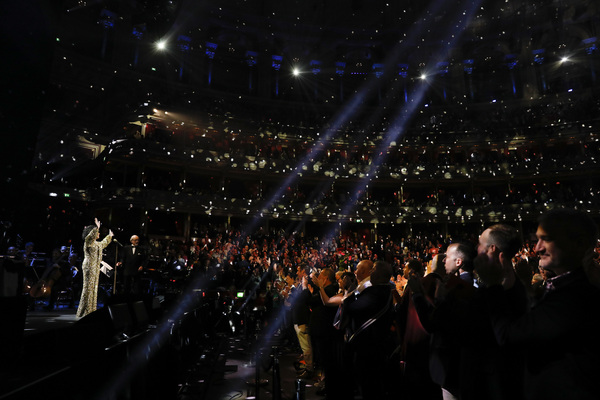 David Arnold (curator and producer of the event, he scored three of the Brosnan Bond films and the first two of Craig’s appearances), introduced the rest of the evening’s proceedings, joking that: “They had to find someone to come on after Shirley Bassey.” He also made a flippant remark about the roof still being intact!

As it turned out, Arnold had selected a superb mix of Bond songs and incidental music, effectively blending some of the older classics with more recent fare across a good representation of composers.

The Royal Philharmonic Concert Orchestra was conducted by Nicholas Dodd, who has orchestrated and conducted James Bond soundtracks for Tomorrow Never Dies, The World Is Not Enough, Die Another Day, Casino Royale and Quantum of Solace.

The non-chronological running order ensured a good variation of sounds, with a decent spate of music tracks, followed by a vocal performance then more music and so on. For the purposes of this review I have chosen to look at the featured songs first.

Understandably, tribute was paid to original Bond composer John Barry (who scored 11 of the films in total as well as arranging and orchestrating Monty Norman’s definitive James Bond Theme for Dr No). Arnold referred to Barry as “the governor” of the Bond music and five-times Bond lyricist Don Black, OBE, recalled with affection his years of working with Barry.

Bassey was not the only original artist to appear: Lulu gave a polished performance of The Man With the Golden Gun and later in the proceedings Garbage sang The World Is Not Enough to much the same aplomb as they did on the film’s release back in 1999. The only thing puzzling me was why was Shirley Manson wearing a dress of such pantomime-like massive proportions? 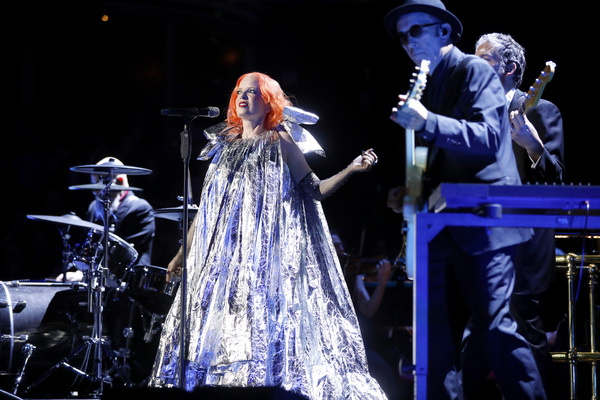 From Russia With Love was smoothly covered by Jamie Cullum, while Paloma Faith gave a flamboyant delivery of Goldeneye.

Skin obviously relished her chance to sing Live and Let Die, which she did impressively, and Emma Lindars’ cover of Skyfall at times sounded very close to Adele’s original. Personally though, I do not rank this song particularly high in the Bond canon even though I acknowledge it is one of the better efforts of recent years.

Ella Eyre competently and energetically covered Licence To Kill but for me at least her rendition of Nobody Does It Better (from The Spy Who Loved Me) fell short of expectations. This could of course be down to the fact that as a long established fan of the films and their music, rightly or wrongly I tend to want any cover artists to sound as close to the original versions as possible.

In this regard, John Grant’s cover of All The Time In the World (from On Her Majesty’s Secret Service) was no more than adequate, albeit slightly disappointing in my view. As a Bond nerd I could also not help noticing his omission of the word far in the lyrics, meaning that instead of: “With the cares of the world far behind us” we got “With the cares of the world behind us.” Was this a deliberate choice (which seems odd as it does not scan as well as the original lyric) or an oversight? At least he was consistent in omitting the word on both occasions it appears in the song!

Most ruinous of all though was Celeste’s cover of You Only Live Twice which sounded out of key and very odd in terms of the timing of her delivery of each line. A definite case of a different interpretation of the original song (sung by Nancy Sinatra) which just made me want to replay the Sinatra version.

Chrissie Hynde had been billed to sing If There Was A Man (from The Living Daylights) but for reasons unknown this did not happen (unexpected illness perhaps?). As a fan of the song it was a shame this was missed out. 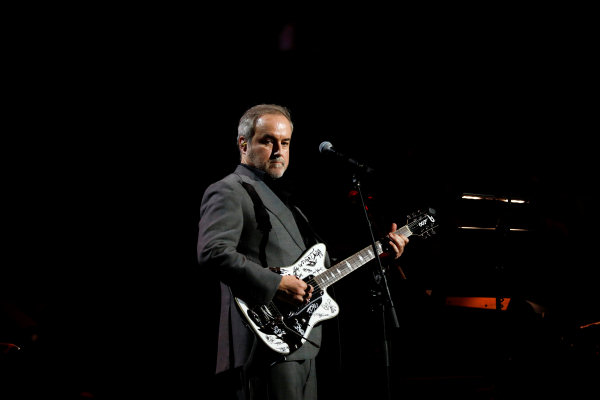 The biggest surprise was David Arnold covering Chris Cornell’s You Know My Name (from Casino Royale). Arnold sang this brilliantly, having explained beforehand that he became good friends of Cornell and was very saddened when the singer took his own life in 2017.

On the music side there was much to delight.

Early on, we were treated to the main theme On Her Majesty’s Secret Service which was excellently played. It was also great to hear Barry’s Space March theme (from You Only Live Twice) performed live.

In addition, there was a particularly rousing and dynamic suite of tracks from Thunderball (also scored by Barry), which comprised the 007 Theme interspersed with various memorable action cues from the film.

It was also great to hear Marvin Hamlisch’s Bond ’77 theme from The Spy Who Loved Me.

Similar adrenaline pumping scoring came from Arnold’s boat chase track from The World Is Not Enough (called Come in 007 Your Time Is Up on the soundtrack). 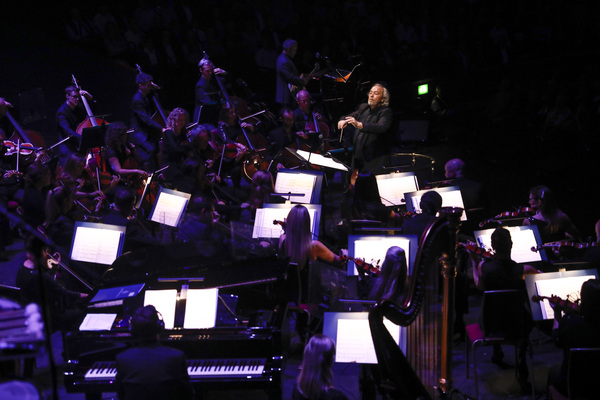 George Martin’s boat chase scoring for Live and Let Die was less dynamic but similarly effective, being accompanied by relevant visuals from this segment of the film.

Eric Serra’s score for Goldeneye tends to attract criticism but the inclusion of his romantic track That’s What Keeps You Alone (featured when Natalya confronts Bond on the beach, at dusk) reminded us that there are pleasant elements to his contribution.

A music cue from SPECTRE (composed by Thomas Newman) was of a decent enough standard, albeit not as inspiring or memorable as much of the other music of the evening.

Arnold also included his evocative A Night at the Opera track from Quantum of Solace, and, along with No Time to Die composer Hans Zimmer, played the guitar for a track from this most recent (2021) Bond film. 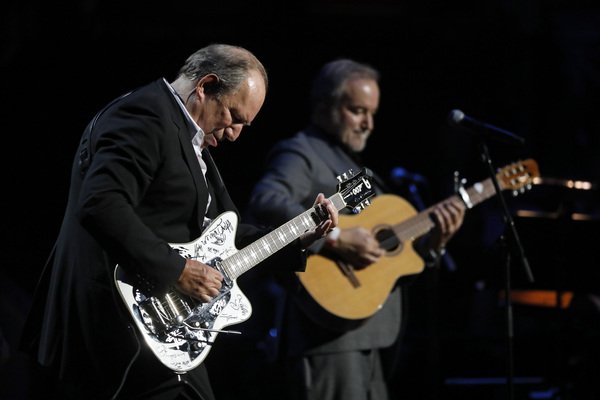 The duo teamed up again to play their guitars for the closing James Bond Theme, which sounded as impressive as ever, repeating this in a faster paced version for the encore.

A hugely entertaining evening was therefore finished off in true Bondian style.

Julian Gale is a food commodities journalist, reporting on global supply, demand, trade and prices for various key items in this arena. You can connect with him on LinkedIn.