In this second of three articles Kathryn Smith shares her thoughts and impressions of five more James Bond books by Ian Fleming. 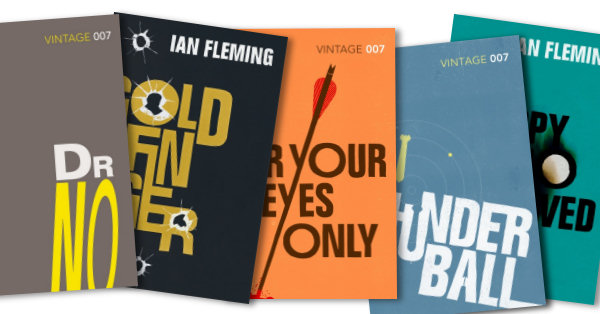 At the end of From Russia, with Love Bond was poisoned by Rosa Klebb, leaving the series on a cliff hanger. But while he looked death in the face, James Bond survived to return in Ian Fleming’s sixth James Bond novel.

Although instructed to investigate a disappearance after his poisoning, Bond makes another journey back to Jamaica for his mission in Dr No (AD: Amazon UK | Amazon.com). Even before beginning his mission there are several attempts on his life – the poisoned fruit basket sounded very much like something out of a fairy tale and a somewhat innocent gift being in a country ripe with exotic fruits.

Reading about the centipede would really scare someone who has a fear of insects and being reintroduced to Quarrel was a nice touch by Fleming. As a reader, we also discover more about Honey Ryder and what she has done in order to survive. She is a skilled and self-educated woman.

Dr No certainly expresses his sadistic side when putting both Bond and Honey in life threatening situations. When reading about the obstacle course I thought of an extreme version of the Crystal Maze game show – instead of solving clues and riddles for crystals, escaping and fighting to ultimately stay alive.

The novel has a very different ending to the film, with Dr No meeting his demise being buried alive compared to sinking into a hot abyss. And the final pages focus on Honey Rider and how Bond went back to see her before returning to England.

The film, from what I remember, stayed as close to this book as possible (AD: Amazon UK | Amazon.com). Everything from Goldfinger cheating at cards, to the golf challenge and being thwarted by Bond on both occasions.

One thing that happened earlier in the film was when Jill Masterton was killed by Oddjob. In the film she was killed before Operation Grandslam was in play whereas in the book, she was killed when the Americans arrived to stop Goldfinger. I did find the unique methods of torture and death Fleming describes Goldfinger using to be creative. This for me showed that not only was Goldfinger ruthless millionaire, but one who left his mark, making him an unforgettable villain and Fleming an unforgettable writer.

I did find it interesting that Fleming introduced Pussy Galore’s sexual orientation and I wonder if it was done as a way of showing the reader that with the times changing that Bond novels were also reflecting these changes too. I also got a sense of female power here, again changing times that women were just as capable as men and also daring enough to pull off heists even when the stakes were extremely high.

Goldfinger’s mission was to steal the gold reserve at Fort Knox rather than irradiate it and to poison the water supply rather than using toxic gas. The poisoning of the water to me sounded very much something the USSR might have tried during the 1950s or 1960s, a silent and deadly tactic.

It was also clever of Fleming to make the reader think that Bond’s mission had been successful in thwarting Goldfinger’s plans, only for a surprise to emerge; Bond being duped into a health check before his flight, being drugged and put on a plane where Goldfinger was. And yet despite the predicament, Bond still manages to turn the tables, defeat Goldfinger and win.

There are several of Fleming’s Bond books that really surprised me when compared to the films. For Your Eyes Only (AD: Amazon UK | Amazon.com) is one of them.

It is different in that it has a number of short stories  in the same book. I admit it did make me smile; the chapters used in For Your Eyes Only; ‘From a View to a Kill’, ‘For Your Eyes’ and ‘Quantum of Solace’. And of course, all used as the titles for future Bond films.

The first concerns the murder of a motor-cycle dispatcher and Bond becoming embroiled by being in the ‘right place, right time’. It felt like a turn back time story to the Second World War, with most of the mission work happening in the woods and hideouts being effectively concealed.

The next story I noticed that one point of focus was how the Havelocks murder affected M because they were close friends. Demonstrating his desire for revenge he tasked Bond with this personal mission for him.

The murder of the Havelocks took place at their home in Jamaica, not on a boat in Greece as in the film, and it was interesting how their daughter, with the help of Bond, got revenge on the hit men. One thing that I wondered was why did the production team not retain the name Judy from the book, but change it to Melina? Through working together they both accomplish their objectives – Bond exacts revenge on behalf of M and Judy receives justice.

Shifting to the next plot, of Bond attending a dinner party was very out of the ordinary for Bond. It was interesting that the story was simply two individuals having an everyday conversation that leads to stories being shared about life and marriage. It was interesting that Bond and the governor are simply having a normal conversation, which leads to a story being recounted to Bond as well as the reader.

It was interesting to see how marriage as in many people’s eyes is meant to be happy, only to turn a person’s soul and personal nature into something dark and shocking, very much like Dr Jekyll and Mr Hyde. I enjoyed how the governor explains to Bond the meaning of Quantum of Solace, also educating the reader as to what it means.

Next the reader moves onto ‘Risico’ which is about an investigation of drug smuggling in Greece and includes the Kristatos and Columbo and their past history of business and fighting. The pair appear in the film For Your Eyes Only.

The fight scene in the warehouse definitely came alive with the way in which Fleming described everything and how Kristatos died in a somewhat lowkey manner – being shot in a getaway car rather than falling from a cliff or drowning.

Then the fourth story got me in that the character Krest appears with his wife. In the film series he appears in Licence to Kill and not For Your Eyes Only. In the book he is certainly different in the way he is described as a millionaire who is uncouth and a bully. I thought it was creative with the whodunit murder of Krest and although Bond/the reader suspected his wife. Was Liz Krest a victim or a villain and was she justified in what she did? Overall, I enjoyed the short stories as it is different to Fleming’s regular formula which makes it stands out more.

I found the opening of Thunderball (AD: Amazon UK | Amazon.com) interesting where Bond’s mission is to get back in shape rather than going abroad immediately.  In a way, it makes a change that Bond gets to interact with other individuals, as well as encountering the spy, Count Lippe, who nearly killed him during of one of his exercise treatments.

And of course, the plot becoming the typical style of a megalomaniac holding the world to ransom using nuclear weapons. I did wonder if Fleming was making some reference to the hostile situation between America and Cuba with the missile crisis at the time. And I smiled reading that SPECTRE’s plan for their operation was Omega – these days Omega watches are closely associated with the Bond franchise.

Domino is portrayed by Fleming as a skilled individual, able to scuba dive and being knowledgeable of the island. And as the book progresses it appears that she gains more layers in her determination to assist Bond after discovering what happened to her brother, despite having no experience. Even with being caught and tortured, Domino manages to help save the day by coming to Bond’s aid, demonstrating her determination for revenge for the loss of her brother.

This was the second Bond book that was surprisingly different, and I remember it for that reason. It surprised me because the plot of The Spy Who Loved Me (AD: Amazon UK | Amazon.com) focuses on Vivienne, a French-Canadian woman for about 85% of the book with Bond appearing near the end. It wasn’t the typical Bond formula in which a villain hatches a plan, M calls in Bond, Bond saves the day and gets the girl.

This one was simply telling the life story of the French-Canadian from her time at school detailing her jobs and lovers and the pain they caused. That resulted in her to deciding to travel across America and finding herself in a scary situation.

The next part in Vivienne’s story definitely makes the reader express admiration and fear for her when she encounters mobsters Sluggsy and Horror who intend to kill her as part of the insurance claiming scam on the motel. Then Bond comes to her assistance as the ‘knight in shining armour’ and thwarts the insurance scam plot.

I thought that it was clever when Bond mentions Operation Thunderball to her briefly, a nice way of embedding the title of the preceded book. The ending stuck with me with the romantic and somewhat detached letter Bond left for her before moving on to his next destination and how she will always remember him, as the spy who loved her.