In the first of three articles Kathryn Smith pens her thoughts and impressions of Ian Fleming’s 007 books. 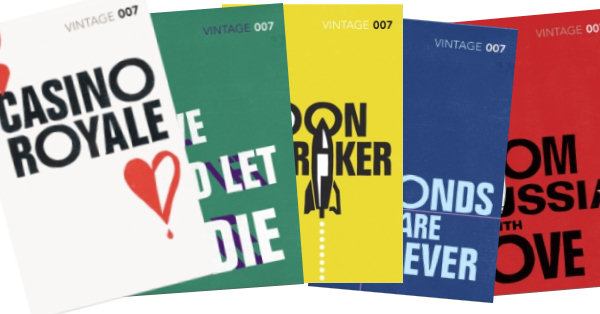 Like many people around the world I enjoy the exploits of Britain’s greatest secret agent. But during 2019 I set myself the task of reading all of Ian Fleming’s James Bond books. Many of you must be properly wondering why….

The answer is simply this; each year I set myself a series of New Year goals and challenges.

I don’t use the word resolution because many people I meet make promises ranging from losing weight to giving up smoking. Only they break that ‘resolution’ by February or March. Goals and Challenges, for me, hold more meaning and merit.

So, I decided for 2019 to broaden my field of reading in two parts; the first to read more classics, books I am ashamed to say that I neglected to read when I was younger. However, I am determined to make up for it now.

The second was to read a book series and the one that came to mind… you’ve guessed it, was James Bond.

I will confess I had never read any of the Bond books before, so I did not know what I was in for, but I was ready to be both surprised and fascinated by the adventures created by the great Ian Fleming. The objective I set myself was to read all of the novels before the end of the year, and to do this I set aside an hour a day dedicated to reading. I documented on my Twitter page each time I started a new book. I did this by taking a picture of the book cover, and adding a comment on what novel I was up to.

It is funny, in a way, that I chose Fleming’s Bond books to read, and I will explain why. It was January last year that I was out shopping in Bletchley, and decided to wonder into the charity shop Mind. When I reached the book section, I looked at the top shelf, and there they were; the complete set of Ian Fleming’s Bond books in a cardboard holder – all new looking.

I made the decision there and then to buy them, otherwise I risked going back later only to discover that they had been sold – and me kicking myself for not buying them that very day. I do not regret that purchase at all!

Before I even opened the first page of Casino Royale I decided to delve into the world of Bond with an open mind. I did not want to make assumptions or automatically decide that because I had seen the film version of the novels, that they were the same, in a black and white format. No influences, no prejudices, nothing until I had finished the last page of each one of the missions Bond had completed.

I can say with absolute honesty that I was not disappointed and loved each book. I have a feeling that I will re-read these novels again, in the foreseeable future.

The book from start to finish didn’t disappoint, the pace for action sequences was fast and frequent and Bond is always on his guard and looking out for those trying to kill him.

One thing I found clever for Bond during the era setting of Casino Royale (AD: Amazon UK | Amazon.com) was where and how he had hidden his winnings. Whereas in the film it’s all high-tech, gadgets and gizmos.

I found the chapter that described how Bond was nearly killed by Le Chiffre’s henchman with the rifle in his cane completely different from the poisoned martini and how Bond managed to deal with each situation without too many questions being asked. The car chase scene certainly got my attention and how in the film Vesper was left in the road and Bond’s car did numerous somersaults before being captured. Whereas, in the book, his tyres were destroyed by steel spikes

Even when he was being tortured at the French villa and would not crack, from the way the villa was described made me picture the beautiful setting and it being used to torture Bond- situation in my head.

The ending really got me, the way that Vesper died and prior to her death, spending the night with Bond and telling him ‘All will be revealed tomorrow’. Only he discovered she had taken an overdose, ending her life with one last happy and then reading the part of the letter where she explained who she was and why she did what she did.

In Live and Let Die (AD: Amazon UK | Amazon.com) there were quite a few things that were different from the film adaptation where characters and scenes occur. One thing that struck me with this novel was Fleming highlighting the villain Mr Big having an association with Russia’s SMERSH which after reading about his character surprised me, especially as he is portrayed as immensely powerful individual.

The element of voodoo is creatively depicted with the locations and surroundings Bond finds himself in. As the book progresses, it appears that Bond is powerless with Mr Big’s influence and power over the area of Brooklyn hinders Bond in taking him down.

The train scene, for me, enabled Bond to learn more about Solitaire and by providing a safe haven created some form of normality from the environment of voodoo and fear. That is until Solitaire is taken.

I noticed that there were at least two scenes in the book that appear in two other films; Felix being mauled by a Great White Shark appeared in the film Licence to Kill. The second was where Bond and Solitaire were to become fish bait, which featured in the film For Your Eyes Only. And it was not Solitaire in the film, but Melina Havelock who was to be subjected to this grizzly fate. It was also a nice change reading at the end of the novel that Quarrel, a civilian in Jamaica, rescues Bond rather than the CIA showing that the Americans don’t always have to be the ones to save the day.

Reading Moonraker (AD: Amazon UK | Amazon.com) was definitely different to what I expected both with characters, settings and the villain’s objective.

After the first two novels I found it refreshing that Fleming opened the book with M not giving him a mission overseas but inviting him to Blades. It is here that Drax is introduced to Bond and his cheating at cards. When I read the description of Drax, my mind immediately thought of the villain from Sonic the Hedgehog when it mentioned a large ginger moustache and bold head. I thought Bond’s tactics of unmasking Drax’s as a cheat in the gentlemen’s club was very clever and discreet.

Although the first ‘mission’ was of a social standing, the second was for political and economic reasons with Bond acting as a detective and going to investigate an incident between Dover and Deal. Whilst on site the reader and Bond are introduced to Gala Brand, a secretary later revealed to be an undercover police officer sent in by Special Branch. Despite being undercover, Gala reveals that she is an intelligent individual, a slight similarity with Tatiana being a Russian cipher operator in From Russia, with Love.

The car chase scene with Drax and Gala Brand again made me think of a similar situation Bond found himself in chasing Le Chiffre and Vesper. Although space scenes appear in the film, none appear in the book and everything regarding Bond’s mission all happened in merry-old England, and the daring plan Drax had to destroy London. Something similar was portrayed in the film Goldeneye.

It was interesting how Fleming instilled in the book the possible idea of Nazism re-emerging, the use of chemical warfare with the rockets and never letting the reader forget about the threat of communism.

In Diamonds are Forever (AD: Amazon UK | Amazon.com) I thought it was clever that Bond managed to infiltrate the Spangled Mob and also make a little money from betting on the horses.

Fleming bringing Felix into the story showed that he wasn’t ready or prepared to write off Bond’s American friend after the incident in Live and Let Die, putting him in a position where he can still be a help to Bond and America.  Although an excellent secret agent, Fleming effectively uses the novel to let Bond show off his casino skills on American soil and that he is nobody’s fool.

I thought it clever and humorous that Fleming managed to incorporate Spectre into the name of the ghost town; Spectreville. Emphasising that no matter where Bond is, Spectre will always be around. No mention of Blofeld and pitting the Russians against the Americans, showing how the film was trying to incorporate current events happening in the era it was shot.

The train chase with the gangsters and the boat scene with the auction and Tiffany being taken by Wint and Kidd was certainly different to when Wint and Kidd tried to kill them both with the exploding Bombe Surprise.

I also noticed that Tiffany’s character came across as very cold and aloof compared to the other Bond girls who were relaxed and welcoming. Upon discovering that her past history taught her not to trust men, it is understandable why Fleming created her this way.

From Russia, with Love

Reading this novel, I found it interesting that it was the fourth in the series where Fleming makes the plot about revenge towards the British government and in particular on Bond who had dispatched three of their agents – Le Chiffre, Mr Big and Drax.

With the opening of the From Russia, with Love (AD: Amazon UK | Amazon.com) focusing on Grant and describing him as a psychopath with a lunar trigger made me think of the werewolf horror stories or Dr Jekyll and Mr Hyde. Although Grant is to perform the killing it is interesting that the plan is created through a strategist – Kronsteen – and military tactics – Klebb – to carry out this plan.

I found it very stereotypical about Grant’s monologue on SMERSH’s plan, how he is going to kill him [Bond] and Tatiana, having his moment of triumph over the British secret service, until it backfires. I could visualise the fight scene on the train in my head by the clever and descriptive style used by Fleming – it felt very much as if I was there, and how Bond and Tatania managed to get across Europe to England.

It ends very much like the film, only with the added addition of an exploding chair and Rosa Klebb not being disguised as a maid in the hotel in Paris and being captured rather than killed.

Rosa’s surprise attack in which she manages to poison Bond is very much a cliff hanger ending with the reader wondering and worrying as to whether or not Bond will survive at first.