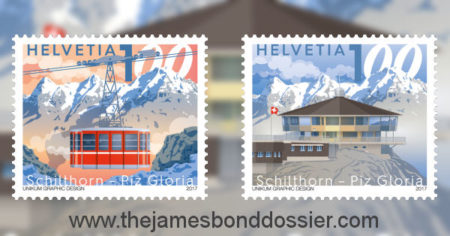 The stamps are available in sheets of eight and have a face value of 1 Swiss Franc. The stamps have been released to commemorate the opening of the last stretch of the Schilthorn cable car in 1967 as well as the revolving restaurant that opened on the summit two years later.

That restaurant, of course, is Piz Gloria and appeared in On Her Majesty’s Secret Service (1969). Ever since it has remained a favourite destination for Bond fans. From the heights of Piz Gloria you get a stunning view of the Eiger, Mönch and Jungfrau as well as many other peaks.