The cover artwork for Steve Cole’s next Young Bond novel was yesterday revealed by Ian Fleming publications on Twitter. 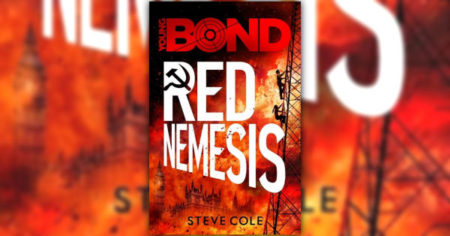 Red Nemesis will be released on 4th May 2017 in hardback, paperback and ebook formats. According to the blurb on Amazon.co.uk:

James is on home soil when he receives a package with a message from beyond the grave. The package’s mysterious contents put James at the heart of a long-running plot that, if it runs its course, will paint London’s streets red with blood. Not only will James have to fight to stay alive and save the country he loves, but to clear the Bond family name, which he holds so dear. The stakes couldn’t be higher, and James doesn’t know who he can trust…

The book is the fourth and final of Steve Cole’s Young Bond novels. Whether he will be asked to continue or whether a new author is being lined up remains to be seen. Cole’s previous Young Bond titles are Shoot to Kill, Heads You Die and Strike Lightning. Previously Charlie Higson wrote five Young Bond titles.

You can pre-order Red Nemesis on Amazon.co.uk