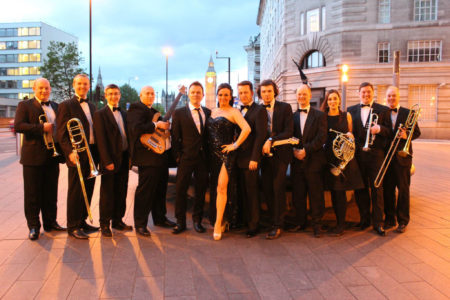 Q The Music and their James Bond Concert Spectacular are teaming up with Bond Girl legends Madeline Smith (Miss Caruso, Live And Let Die) and Caroline Munro (Naomi, The Spy Who Loved Me) to bring the music of Bond to theatres around the UK.

Q The Music have become a household name amongst Bond fans around the World with their faithful, authentic and passionate performances of the Bond songs: highlighted by them being asked to perform at Sir Roger Moore’s memorial event in October.

The event was held at Pinewood Studios, a sound stage being dedicated in Sir Roger Moore’s name. It was attended by the who’s who of the British Film and Television industry. Amongst those attending were Sir Michael Caine, Dame Joan Collins, David Walliams, and many Bond alumni including musical contributors like Monty Norman, Leslie Bricusse and Sir Tim Rice.

The band left quite an impression:

“When our thoughts turned to planning Sir Roger’s memorial event at Pinewood, we knew James Bond would play a significant part and one of our first calls was to Q The Music. They helped make a wonderful day an extraordinary day.”

The show will feature all the Bond theme songs performed to the highest quality, but also some of the special numbers from the films that the band are known for- such as Bond 77.

Madeline and Caroline will be compering the shows between the songs, and as well as guiding you through the show they will be sharing some memories from their time working on the films.

The show will be appearing at:

For ticket details go to www.QTheMusicShow.com