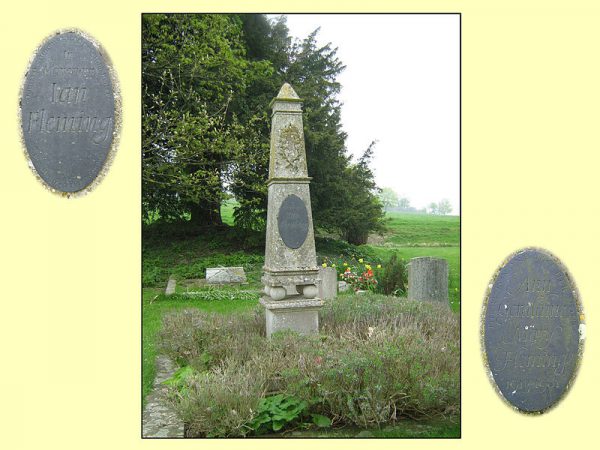 Obelisk marking the graves of Ian Fleming, his wife and his only son. Photo by Robert Cutts.

A plaque commemorating the life of Ian Fleming has been stolen from the obelisk marking his grave, as well as those of his wife Ann and son Caspar. The plaque appears to have been levered out from the side of the memorial.

Fleming, who died in 1964 at the age of 56, is buried at St James’ Church in Sevenhampton, Wiltshire. It is close to the last house occupied by the Flemings before his death. The memorial included three slate plaques, each with an epitaph. The Latin inscription dedicated to Ian reads “Omnia perfunctus vitae praemia, marces” – “Having enjoyed life’s prizes, you now decay”.

Fleming’s step-daughter, Fionn Morgan, alerted me to the theft on Twitter. She spoke in more detail to the Daily Mail, saying:

“It could be the work of an extreme Bond fan who wants to keep it. Or, less likely, it could have been stolen by someone thinking it would sell for a large sum.”

However, her true belief is that someone desecrated his grave, incorrectly believing his family were beneficiaries of the slave trade because of Goldeneye, Fleming’s home in Jamaica. On Twitter Morgan said, “This is a horrible thing to do and has deeply saddened his family”.

You can read more about visiting Ian Fleming’s grave at James Bond Memes.

One Response to “Plaque stolen from Ian Fleming’s grave”