Orlebar Brown has made its new 007 swim short collection available to pre-order ahead of the official release. 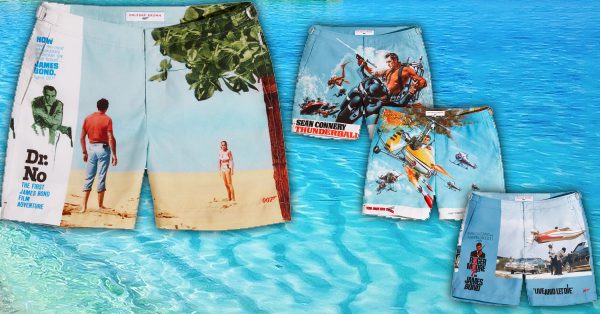 Orlebar Brown’s first involvement with the 007 series goes back to Skyfall, after they provided Daniel Craig’s swimwear for a very brief pool scene.

This new collection features artwork from four James Bond movies printed on the British swimwear manufacturer’s  Bulldog swim shorts. The four films in question are Dr No, Thunderball, You Only Live Twice and Live And Let Die. Curiously Skyfall isn’t reference, at least for now, and this is a different model to that which appeared in Skyfall. The Setter model features a shorter leg than the Bulldog.

They come in at a rather pricey £245 and I’m not sure any of the designs is particularly flattering. However, if they are your kind of thing and you’re looking forward to your summer holiday then it’s perfect timing.

You can order the swim shorts here.