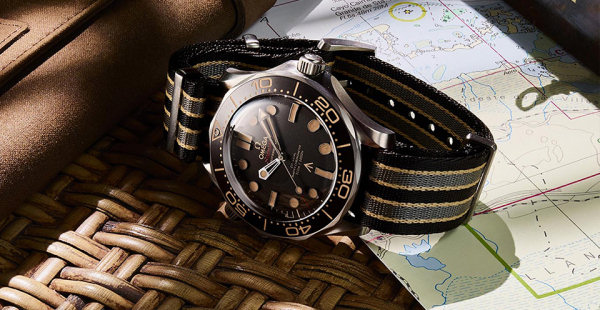 At an event in New York, Omega unveiled the new watch that will be worn by Bond in No Time to Die. As well as appearing on screen in the 25th 007 film the watch will also be available in Omega ’s current collection from February.

The new Seamaster Diver 300M 007 Edition has been built with military needs in mind and was designed with input from Daniel Craig. He says, “When working with Omega, we decided that a lightweight watch would be key for a military man like 007. I also suggested some vintage touches and colour to give the watch a unique edge. The final piece looks incredible.”

The New York launch event showcased a display of the unique Seamaster watches worn by the British spy over the past 25 years and was attended by Daniel Craig and producers of the James Bond films, Michael G Wilson and Barbara Broccoli.

The watch will be released in Omega Boutiques from February. It will be available on a titanium mesh bracelet, or on a striped NATO strap in dark brown, grey and beige with 007 engraved on the loop.