The Bond of the Millenium takes an in-depth look at Pierce Brosnan’s time as James Bond. 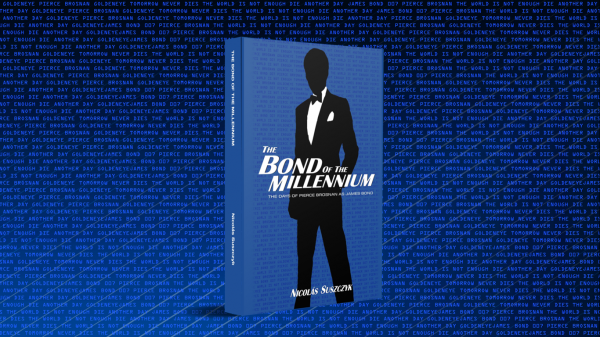 He was 41 when he was formally announced as the fifth actor to play James Bond on June 8, 1994, playing the role for a decade in four productions and three original video games. One could say that it was written that at some point of his life Brosnan would play Ian Fleming’s secret agent, and this happened during a particular time where the world was going through many cultural, technological and political changes.

Featuring interviews with stunt performers Sarah Donohue (The World Is Not Enough) and Jean Pierre-Goy (Tomorrow Never Dies), actor Daz Crawford (The World Is Not Enough), screenwriter Danny Bilson (007 Nightfire, Everything or Nothing) and percussionist Pete Lockett (Tomorrow Never Dies, The World Is Not Enough, Die Another Day), among many others, this book offers an in-depth look to the era that took the franchise to new heights from the 1990s to the first years of the new millennium, remarking the importance that Pierce Brosnan’s portrayal of James Bond has had to guarantee the continued success of 007 into the 21st century.

Nicolás Suszczyk became a James Bond fan when he first watched Goldeneye at the age of seven in his native Buenos Aires. As a freelance writer he has contributed in magazines like MI6 Confidential and Le Bond and sites like Ultimate Action Movie Club, From Sweden With Love, Archivo 007 and The Spy Command.

He is the editor of the web sites The Goldeneye Dossier, Bond en Argentina and The Secret Agent Lair, which he co-admins with Jack Walter Christian. In 2019 he published his first book, The World of Goldeneye, also available on Amazon stores.

The Bond of the Millenium is available now from Amazon in both paperback and Kindle formats.