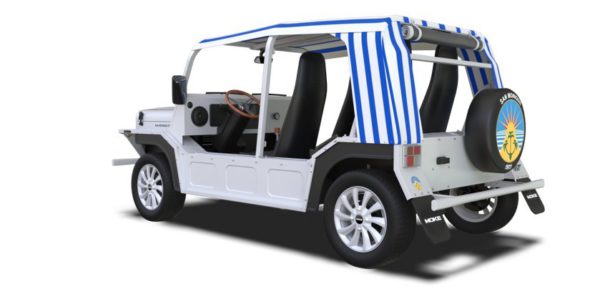 When you think of James Bond’s cars the brand that is most likely to spring to mind is Aston Martin. If you’re more into the books then you may think of Bentley, while fans of Roger Moore’s films may first conjure up the image of a Lotus.

However, the car that has appeared in most James Bond films apart from Aston Martin is the Mini Moke. Originally designed by the British Motor Corporation in 1964, the car features in You Only Live Twice, Live and Let Die, The Spy Who Loved Me and Moonraker. As the British car industry consolidated in the 1960s and 70s the car was sold under the Austin, Morris and Leyland brands.

In 1990 Rover Group sold the design and Moke name (although not Mini) to an Italian company that continued producing the cars in Portugal until 1993.

In 2012 Moke International brought the name and design back and in 2016 Moke America started producing an electric version. This week the company announced a partnership with Eon Productions and revealed details of the first of a planned series of special 007 edition cars.

The electric and street legal Moke is the first of several 007 editions celebrating the James Bond franchise. Drawing inspiration from the Caribbean, the 007 “San Monique” takes its name from the fictional island featured in Live and Let Die (1973). The limited edition 007 Moke has the same striking white and blue design, and features the unique artwork created for the movie.

“We are excited to partner with a brand that has such an authentic history with the Moke. Like Bond, Moke has its origins in the 1960’s and our first vehicle brings together two icons of modern culture that have shared roots in Britain and the Caribbean,” says Todd Rome, founder and CEO of Moke America.

The 007 Moke benefits from class-leading technology, with the addition of unique details and finishes. The cars can be purchased across North America, the Caribbean, the Bahamas and the Middle East and cost $26,975 USD (excludes delivery). Each Moke is custom-built and takes three months to produce.

The 007 Moke is available to order online at: www.mokeamerica.com.

Presumably future 007 editions will be based on the other three appearances from Moke in the James Bond films.