Return of branded Twitter hashtags prompt speculation about No Time to Die release. 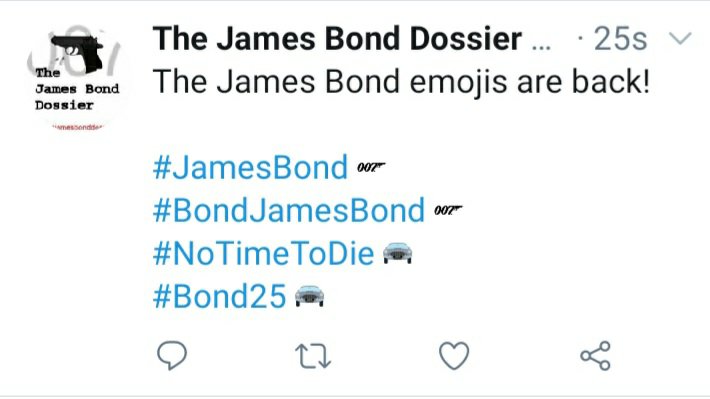 Some months ago, prior to the planned release of No Time to Die in March, a number of hashtags appeared on Twitter with 007 related branding.

The 007 logo trailed the #JamesBond and #BondJamesBond hashtags while an Aston Martin emoji followed #NoTimeToDie and #Bond25.

Following the delay of the film at the beginning of March the due to the covid-19 pandemic the branded hashtags soon disappeared as brakes were put on promotion.

So there was considerable online excitement yesterday when the branded hashtags reappeared, prompting many to speculate that No Time to Die would indeed be released in November. Many fans feared a further delay to 2021.

On top of that several people suggested on Twitter that a new trailer was due later in the week.

There certainly does appear to be some movement within marketing departments. And with little more than two months to go the decision-makers need to make up their minds whether the film drops in November or is delayed further. Indeed, whether it receives a pure theatrical release or, as has happened with other films, a mixed theatrical and premium video on demand release.

Now the summer is over it looks like it’s crunch time for No Time to Die. The hashtags are likely to be a small part of the overall marketing cost and a better indicator, if no announcement is made, is whether a trailer is in fact released this week.

While no trailer may mean nothing at all, a new trailer would suggest that marketing has restarted in earnest.

One Response to “James Bond branded hashtags return to Twitter”