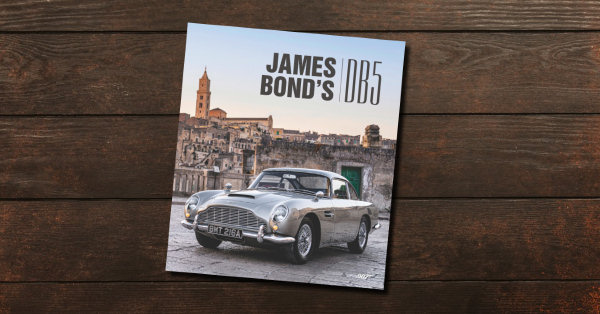 Hero Collector Books are delighted to announce the release of James Bond’s DB5, the first official in-depth history of 007’s famous Aston Martin. The book will be published on September 28th to coincide with the release of the 25th James Bond film No Time To Die, which features the DB5 prominently.

This is the first time Eon Productions, the makers of the James Bond films, have authorised an official history of this iconic car, which made its debut in Goldfinger and went on to appear in another eight 007 films. The book has been carefully researched in close collaboration with Eon and Aston Martin and draws on both their archives. It includes storyboards, diagrams, design materials, and many rare and beautiful photographs that cover every detail of the car, from the over-riders to the exhaust.

James Bond’s DB5 has forewords by Daniel Craig, James Bond producer Michael G Wilson, and Aston Martin’s Chief Creative Officer Marek Reichman. As Reichman says, “There are no other cars that enjoy such an exciting connection to such a beloved character and I hope this book demonstrates that among all the technical and marketing data that underpins car production, an indelible truth remains: great cars are wonders to behold, blending creativity with one crucial factor: fun. Bond definitely enjoys the DB5. I hope you enjoy it too.”

When 007 first took control of a specially-customised Aston Martin DB5 in 1964’s Goldfinger, it re-defined action movies forever. The car was fitted with high-tech weapons and ingenious gadgets that were the stuff of dreams, and in the years that followed, Bond and the DB5 have become inextricably linked. The car returned in the next film, Thunderball, while replica 007 DB5s set off on a world tour to promote the Bond movies. 007 would drive other vehicles, but the DB5 was always the definitive Bond car. After a thirty year absence It returned to the screen in 1995’s Goldeneye, and has gone on to feature in another five Bond movies, culminating in its appearance this year in No Time To Die.

This beautiful coffee table book covers the entire story, starting with the Bond producers’ initial letters to Aston Martin before detailing the modifications made to the car for the filming of Goldfinger, including Eon’s original drawings and rare pictures of the cast and crew on location in Switzerland. It goes on to explore the fascinating history of the DB5s that went out on tour, and covers every subsequent appearance of the DB5 in the Bond movies, including the inside story of how it was seemingly destroyed in Skyfall before returning in triumph in No Time To Die. Its appearance in the latest Bond film is covered in depth, with unique photography and insider reports from the shoot in Matera, Italy.

This is the definitive book about one of the most significant and coveted cars in movie history. It is an essential part of the Bond story and a stunning addition to any library.