Exhibition of Richard Chopping’s work to open in Salisbury

Display of works by James Bond artist opens next month and will remain open over the summer. 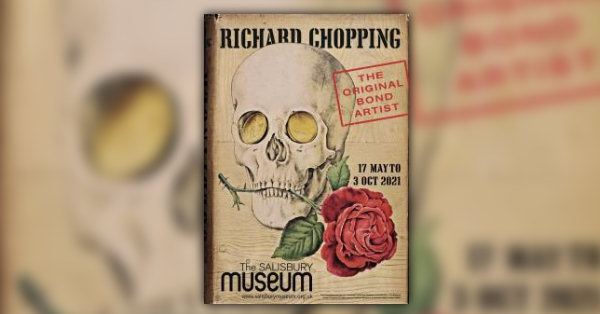 This summer Salisbury Museum plans to exhibit the work of Richard Chopping, whose trompe-l’œil artwork was used on the dustjackets of nine James Bond first edition books.

The exhibition runs from 17th May until 3rd October 2021 and is advertised, rather inaccurately, as Richard Chopping: The Original Bond Artist. Prior to Chopping, Kenneth Lewis provided the artwork for Casino Royale, Live and Let Die and Moonraker; Pat Marriott did Diamonds Are Forever (and later, Dr No).

Chopping’s first cover was for the fifth book, From Russia, With Love, which memorably depicts a sawn off Smith & Wesson crossed with a rose. After that he worked on all Ian Fleming’s books apart from Dr No and it is certainly his art that people tend to associate with the first editions.

On James Bond & Friends podcast we recently talked about Chopping’s work for From Russia, With Love, which you can listen to here.

This summer, on the eve of the release of the 25th Bond movie No Time to Die, The Salisbury Museum celebrates the life and work of writer, illustrator and teacher Richard Chopping (1917-2008), best-known for illustrating the original book covers for James Bond.

Richard Chopping was a master of the trompe-l’œil technique, producing highly realistic three-dimensional images, and it was this distinctive style that led him to be commissioned by Ian Fleming to illustrate nine of the James Bond book covers from 1957 to 1966.

The exhibition features some of the original working drawings for the books, including the striking skull design for Goldfinger – one of Chopping’s personal favourites, and a commission that had been declined by his former friend and subsequent arch-rival, Lucien Freud.

The exhibition looks at Chopping’s entire output, positioning his work for Fleming firmly within the context of his 40-year career. Highlights from his early years include his illustrations for Butterflies in Britain (1943) and the collection of children’s short stories Mr Postlethwaite’s Reindeer (1945). There are also delicate wild flower drawings, prepared for an ambitious 22 volume series on British wild flowers by Penguin, which was abandoned due to spiralling costs, and Chopping’s original design and preparatory studies for the book cover of his first novel The Fly (1965) which was a success despite being described by one reviewer as a ‘just about the most unpleasant book of the year’.

With many works which have never previously been displayed, this exhibition will be a genuine treasure-trove for the Chopping cognoscenti and for those discovering his work for the first time. They reveal a talented artist whose work should perhaps be as well-known as the fictional spy he helped make famous.

Thanks to Sean Longmore and Paul Simpson for the heads up.