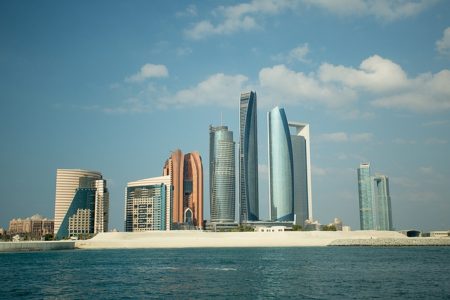 Noakes joined producers from Disney and Universal Studios in a five day tour hosted by the Abu Dhabi Film Commission (ADFC). In recent years the Emirate has seen a number of big film projects, such as Star Wars: The Force Awakens, Fast and Furious 7 and a number of Bollywood films.

During the tour, the delegation visited a range of locations in and around Abu Dhabi including Emirates Palace, the F1 track on Yas Island and The Lourve on Saadiyat Island. The tour also included taking in an aerial view of Qasr Al Sarab desert by helicopter

Although there is some fan speculation Noakes was location scouting for Bond 25, it seems unlikely at this stage. More likely he was there just to see Abu Dhabi’s facilities and scenery.

But if James Bond were sent to Abu Dhabi, how would he get on?

Abu Dhabi is part of the United Arab Emirates, and while fairly lenient compared with some Arab countries, Bond would find it’s not just Blofeld he needs to be careful of:

In short, it’s not the kind of place Bond would feel at home and with a questionable human rights record. Studios should steer clear.