According to her family Diana Rigg died at home peacefully. She had been suffering from cancer. 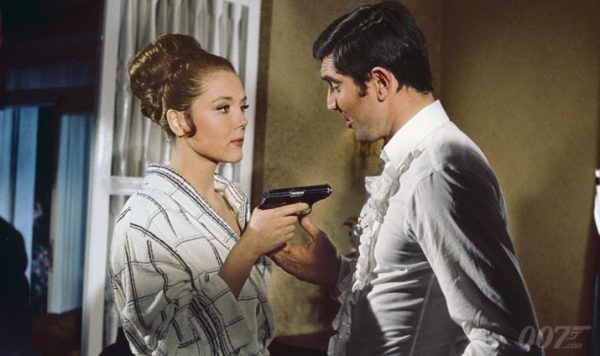 Yesterday we received the sad news that Diana Rigg passed away at the age of 82. Bond fans best remembered for her performance as Contessa Teresa di Vicenzo – or, more informally, Tracy – in On Her Majesty’s Secret Service (1969) opposite George Lazenby as 007.

It worked though. While for a long time On Her Majesty’s Secret Service was generally held in low regard, these days it is viewed as one of the classics. As well as some stunning alpine scenery and first rate John Barry score, Rigg made Tracy one of the most memorable Bond girls and one of the biggest female roles in the entire series.

In fact, while watching On Her Majesty’s Secret Service recently for the James Bond & Friends watchalong series, someone made the comment  that it’s almost more Tracy’s film more than it is Bond’s. She is rightly considered one of the classic Bond girls and the only one he married.

There are some oft repeated stories about how she and Lazenby didn’t get along on set. However, as so often is the case, these reports are untrue. Lazenby acknowledges how much she helped him while filming.

Diana Rigg had a remarkably diverse career spanning more than six decade. She appeared on stage with the Royal Shakespeare Company and continued her theatrical work in London and New York until as recently as 2018.

She played Emma Peel in 51 episodes of The Avengers between 1965 and 1968 opposite Patrick Macnee and, from 2013 to 2017, Olenna Tyrell in Game of Thrones as well as many television films and series including Dr Who. On top of that she appeared on the big screen and handful of times too.

Apart from On Her Majesty’s Secret Service these include Shakespeare’s A Midsummer Night’s Dream (1968) and Julius Caesar (1970), The Great Muppet Caper (1981) and Agatha Christie’s Evil Under the Sun (1982) directed by Guy Hamilton. Most recently she filmed the Edgar Wright directed Last Night in Soho, due for release in 2021.