Mr Hinx actor hopes to return in Bond 25 but it may hinge of Daniel Craig returning as 007. 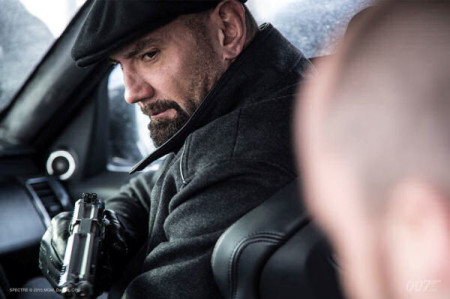 Speaking at the European premiere of Guardians of the Galaxy: Vol. 2, Dave Bautista revealed he hopes to return as Mr Hinx in Bond 25. Speaking exclusively to Metro he said:

Believe me we’re talking about it a lot. We’re waiting at home with our fingers crossed… We’re waiting for the news to see if Daniel will sign up for Bond 25, because then there’s a chance that Hinx will come back.

Presumably “we” means Bautista and his wife but he doesn’t appear to know any more than anyone else. He told the reporter he reads “the rumours just like everyone else”.

Hinx was a henchman in the same vein as Oddjob or Jaws, immensely powerful yet remaining silent. It was a little surprising Hinx didn’t return at the end of SPECTRE. He was thrown from a moving train after a fight with Bond but his demise wasn’t shown. Surely Hinx is ripe for a return.