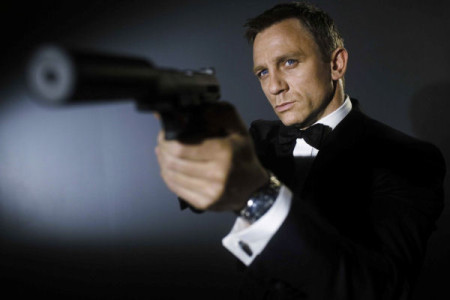 It was a fair bet that the actor would be asked the big question on all fans of 007 at the moment: Will he return as James Bond for a fifth time?

A report on the BBC’s website says he told the host of Magic 106.7 in Boston:

“No decision has been made. I’m not holding out for more money or doing anything like that. It’s just all very personal decisions to be made at the moment.”

He added: “I know they’re desperate to get going and I would in theory love to do it, but there is no decision just yet.”

You could take this at face value and accept that Craig really has not yet made up his mind. But on the other hand he might be mindful that admitting he will do another Bond film could completely overshadow the promotion of Logan Lucky. That could potentially damage its chances at the box office.

Given the report last week that filming on the TV series Purity, in which Craig is due to appear, has been delayed because of Bond 25 it looks likely that all parties have agreed to delay an official announcement.

It wouldnt be the first time the actor has been economical with the truth when it comes to the Bond films. Nor the producers, who insisted Eve was not Moneypenny and Obenhauser not Blofeld.

So why expect any difference this time?

Perhaps we can expect some kind of announcement after all promotional circus surrounding his now film dies down. Or maybe Barbara Broccoli really is searching for a new actor to step into Craig’s shoes.