The actor and stuntman Joe Robinson died last week at the age of 90. For Bond fans he is best remembered for playing Peter Franks in Diamonds Are Forever (1971). He was 90 years old. 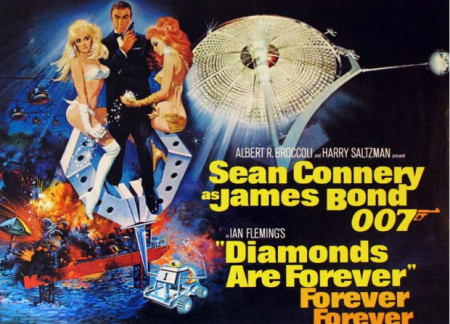 According to Wikipedia, Robinson claimed he was a contender for the Red Grant role in From Russia With Love. Though he did not get it, Connery recommended him for the role in Diamonds Are Forever. Robinson also claimed he turned down the role of the Rank Organisation’s Gongman.

He was born on 31st May 1927 in Newcastle upon Tyne and initially embarked on a career in wrestling as ‘Tiger Joe Robinson’, winning the European Heavyweight Championship in 1952. At the same time, he was also interested in acting and studied at the Royal Academy of Dramatic Art. After injuring his back wrestling in Paris he decided to concentrate on acting.

Robinson’s first role came in the keep-fit documentary Fit as a Fiddle and in the same year, 1952, he followed it up with a part as Harry ‘Muscles’ Green in the musical Wish You Were Here in the West End of London.

He made his film debut in 1955’s A Kid for Two Farthings, in which he wrestled Primo Carnera. His film and television career really took off in the 1960s and in 1962 he appeared in British classic The Loneliness of the Long Distance Runner alongside appearances in The Saint and The Avengers in 1963.

With his younger brother Doug and Honor Blackman, he co-authored Honor Blackman’s Book of Self-Defence in 1965 (Joe was also a judo champion and black belt at karate). The year after he appeared in an episode of the sitcom Pardon the Expression which referenced this book.

During this time he was also a popular stunt-arranger, working on several James Bond films and in 1960 was invited to Rome where he appeared in five muscle-bound Italian epics, including Taur the Mighty (1963), Thor and the Amazon Women (1963) and Ursus and the Tartar Princess (1961). Other notable big-screen appearances include 1961’s Carry On Regardless, of the British institution the Carry Ons.

After he retired from acting, Robinson lived in Brighton where he opened a martial arts centre. In 1998 he hit the headlines after fighting off a gang of eight muggers single-handedly. The 70-year-old was getting off a bus in Cape Town when the gang struck with baseball bats and knives. 6 ft 2 ins Joe poleaxed two with flying kicks, karate-chopped another in the chest and broke the arm of a fourth, while the rest fled.