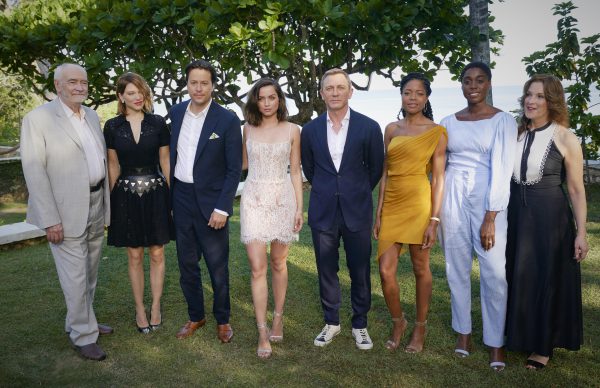 No Time to Die is the first James Bond film to be released in the #MeToo era and made a point of steering clear of many of the elements that many found troublesome. At the time of the release of No Time to Die director Cary Fukunaga was praised by Lashana Lynch for his approach to the women in the film.

Both he and Daniel Craig tried to take credit for bringing in Phoebe Waller-Bridge to help sort out the script out and out went Bond sleeping with – well, just about anyone – and in came much stronger female characters. Waller-Bridge said it well; Bond doesn’t have to treat women well, but the films do.

So in Nomi we got a  a double-O who was not only black and female but also the new 007. Madeleine Swann was back, Bond worked alongside CIA agent Paloma – not only did Bond not sleep with her but she easily matched him on their mission in Cuba – and Bond’s final mission was, let’s face it, to save his daughter’s cuddly toy rabbit from Safin.

According to interviews at the time of No Time to Die’s release Fukunaga talked about how Barbara Broccoli had been pushing for stronger female parts. But it’s also notable how under her watch some of the female characters were treated particularly badly. Both Bond’s reaction to Sévérine’s death in Skyfall and basically forcing himself on Lucia Sciarra are just so off it’s not true. They don’t even feel like they are how Bond would act anyway. Nothing is right.

It didn’t take long for Fukunaga’s credentials as the poster boy for Bond x MeToo to come under the spotlight though. Shortly after the film’s release Raeden Greer claimed to have been sacked from True Detective because she refused Fukunaga’s demands to appear topless.

But after he posted on Instagram in support of Roe versus Wade just recently, another actress accused him of being a sexual predator. Rachelle Vinberg says he groomed her when she was 18 and was in a relationship with him for three years – Fukunaga would have been 39 at the time. She also claimed he has done the same with other young women.

That seems to have caused twin sisters Hannah and Cailin Loesch to have made further accusations against Fukunaga, including his behaviour towards them at a private screening of No Time to Die at his New York penthouse. Which prompted ex-girlfriend Christine Frosreth also spoke out against his behaviour.

But it’s not only young actresses who are unhappy with Fukunaga. Writer and producer Nick Cuse, who is credited on the latest Bond as a consultant, also let rip at Fukunaga on Instagram, calling him “the worst human being I have ever met in my life”. He went on to say he used:

a lot of the same tactics to get me to write his scripts for him. Which he would then put his name on… The worst part of the experience was that whenever someone else mentioned that a line I wrote or an idea I had was good, he would always have to change it. He couldn’t bear that it was not his. Even though he was getting credit!

As well as No Time to Die Cuse also worked with the director on TV mini-series Manic on which they both received writing credits so it’s not clear if Cuse is referring to that or No Time to Die, but the latter seems likely. He continued;

As far as girls, his type is ‘looks underage.’ I don’t know much about the things he’s done to women but I’m sure they are horrible. The way he treats all people (other than celebrities) is horrible… I did not have an experience remotely comparable to @rachellevinberg @loeschtwins @kristine_froseth… But by speaking out, they opened my eyes to the fact that I was under the spell of a vile cult leader.

Fukunaga is currently in Ukraine and has not responded to the allegations. But after all the positive press he attracted for No Time to Die’s treatment of women it’s now looking less likely that he will be on board for another film despite Barbara Broccoli’s enthusiasm at the time of release.