Walk in the steps of Sean Connery, Roger Moore and Daniel Craig in October tour. 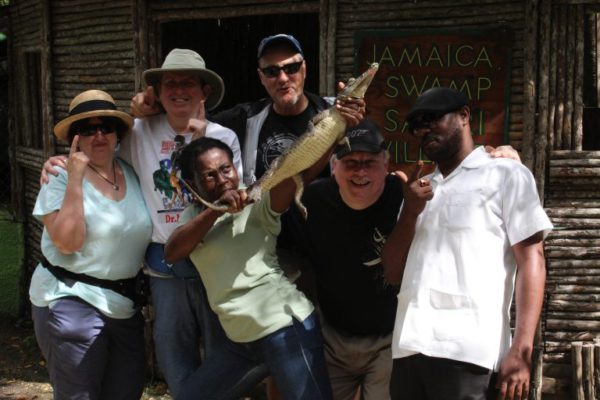 The 25th tour organised by Bond Fan Events is Own The Club Deux! (as in Goldfinger’s ironic remark, “Oh, nothing, Mister Bond. I own the club!”)

The tours in Jamaica will include Ian Fleming’s World and GoldenEye Resort to celebrate the 70th anniversary of the writing of Casino Royale, and three other daylong locations tours for Dr No in the year that marks the 60th anniversary of the film, as well as Live and Let Die and No Time to Die.  The tours travel across Jamaica by bus, light hiking and even by boat.

Guests are booked together at the Sans Souci Club in Ocho Rios, the Jamaican resort that hosted cast and crew as it appeared onscreen in Dr No and Live and Let Die.

As well as including all inclusive food and drink, the Sans Souci resort includes trips to Dunn’s River Falls from Dr No and Ian Fleming’s home Jamaican golf course. Free water sports include scuba training with unlimited dives and all equipment provided.

The tour is organised by Matt Sherman, who founded Bond Fan Events as the Bond Collectors’ Weekends in 1998, with his spouse, Janine Sherman. Sherman says:

We Bond locations fans are fortunate. New Zealand is faraway for most Lord of the Rings fans, and similar fascinating locations, such as the Planet Vulcan or the Death Star are actually long-ago deconstructed film sets. But James Bond book and movie locations are often real-world spots of glamour and excitement, the best hotels, restaurants and scenic vistas. I get a bigger kick from bringing fans to the Filet of Soul New York or Thunderball’s Palmyra lair than I do finding the locations on my own. It is moving emotionally to see fans tear up to find a previously hidden location or to sit in wonder at Ian Fleming’s own writing desk.

The Shermans have led 007 tours worldwide and specialize in escorting tour groups to exclusive locations. Part of the fun is deducing the precise locations used for film crews and Ian Fleming’s travel.

A recent Bond Fan Events tour in Las Vegas revealed the exact spot where Bond was buried in desert piping and even corrected the columbarium niche where Bond was knocked unconscious in Diamonds Are Forever. Finding the pipe burial spot took Sherman hours with Google Maps but the tour group was thrilled to debate then confirm the Vegas mausoleum site in person last September.

October’s Jamaican tour pledges similar surprise locations, and also appearances by guest stars. The Shermans will also host daily themed games and activities at the resort for Bond fans and their partners.

For more information on this and other tours email Matt Sherman at [email protected] or visit BondFanEvents.com.