Actress played Dink in Goldfinger as well as the title sequence “Golden Girl”. 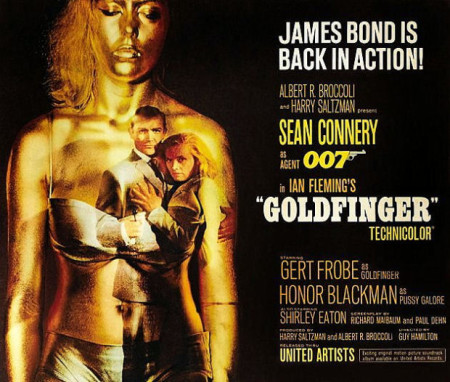 Last week director Edgar Wright announced the death of Margaret Nolan on twitter. In a series of tweets he revealed that she had worked on his forthcoming film Last Night In Soho, due to be released next year.

Nolan appeared as Dink in Goldfinger (1964) alongside Sean Connery and as the “Golden Girl” in the title sequence and publicity stills, including the poster (above). Reportedly after being offered the title sequence role she requested a part in the film too.

Starting her career in modelling, Nolan made numerous film and television appearances over the years, including a part in the Beatles’ A Hard Day’s Night (1964) and appeared in a number of Carry On films.

On television she appeared in episodes of The Saint, The Des O’Connor Show, The Morecambe and Wise Show, The Persuaders!, Steptoe and Son, Whatever Happened to the Likely Lads? , Last of the Summer Wine and The Sweeney.

More recently Nolan had been working as an artist, producing works of photo-montage. Her art was exhibited at venues such as the Brick Lane Gallery, The Misty Moon Gallery and Gallery Different.