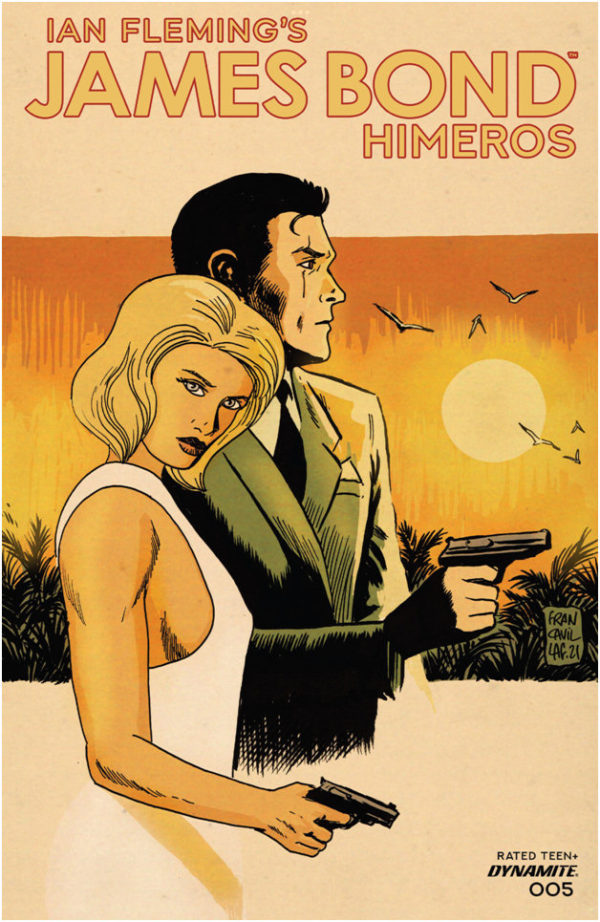 Banes attempts to recruit business from even more unsavory elements whilst Bond and Kino duel to the death. 007 wins, rushing Sarah Richmond for medical assistance. He then gears up to raid Banes’ compound. The Double-O makes quick work of the henchmen. Upon confronting Banes, Bond ends his life with a quick shot to the head, but not before Banes triggers his compound to explode. 007 makes his escape. Sometime after, he takes Richmond’s remains to her mother in Montana and bears witness to her being laid to rest. 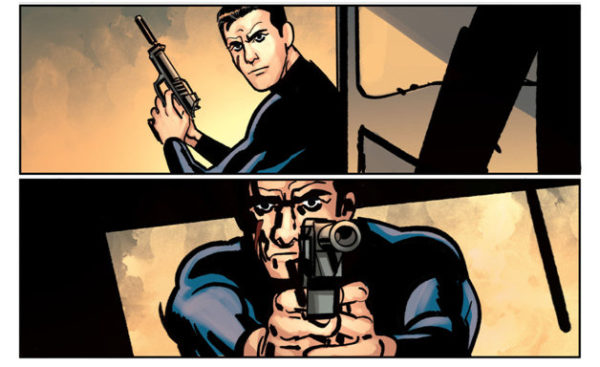 Barnes opens this concluding issue with Banes wooing a prospective client to the island. I was initially confused as to who was providing the open narration, Banes or the man he is giving a tour to. I had to reread it to finally understand that this was Banes’ point of view, but it is not clear, especially as we haven’t really heard from him in such a manner. I still don’t know if this is his inner monologue or if he is delivering this speech to his guest, as a way to reassure him that whatever happens on the island stays on the island, perhaps?

The battle between Bond and Kino rages on over the next nine pages, with returning artist Pontrelli alternating mainly between a five-panel-a-page cinematic layout, with two splash pages thrown in for good measure. There is some tension as the reader knows Bond can’t even get hit by one of the Viper’s rounds, but for the most part the scene fails to get the blood pumping until the grisly end.

Bond’s raid of the compound similarly fails to inspire. It feels very by-the-numbers, with nary a henchman to provide a challenge to 007, who mainly mows everyone down as if he is reenacting the climax aboard the stealth ship in Tomorrow Never Dies. Banes offers no threat to Bond, either, resulting in an end that feels flat and by the numbers.

The issue really gets weighed down by the art for me. Giorgio Pontrelli’s lines tend to be too heavy and simplistic for my liking. Similarly to his last outing, Bond’s face is inconsistent between panels to where you could mistake him for different characters. Kino comes off as a parody of Daniel Craig, which may be intentional, to give one the feeling that Bond has met his match. Faces can also feel unfinished at times, making the art look rushed. I don’t know the reasons behind having so many artists across the five installments of this story, but it hurt the finished product and I can’t imagine how it will all play once collected in a trade or hardback.

Himeros started off very promising, but began to wander towards the middle, spiraling down at the end to an unsatisfying climax. With a little tightening during the last two issues, in addition to a more consistent art style, this could have been a stronger entry into Dynamite’s series, but as it stands, it won’t be one I revisit often.