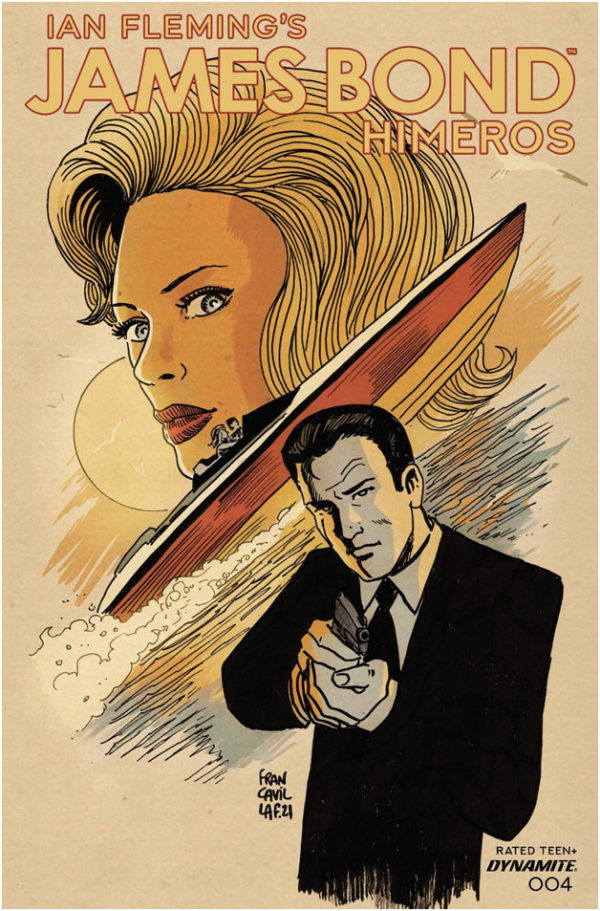 A deadly weapon is revealed as Bond continues to protect Ms. Richmond, taking her to Wilhelm’s private island so they can end this!

West Brompton, London. Minister Abara meets with Anton Banes. Banes shows off his latest weapon, dubbed “The Viper”, a firearm built out of metal-free components that fires rounds made out of a plastic alloy that disintegrates upon entering the body, releasing the chemical equivalent of an ash viper’s venom. When Minister Abara declines to purchase said weapons based on Banes’ affiliation with Richard Wilhelm, Banes promptly shoots him dead with the Viper.

007 and Sarah Richmond fly to Wilhelm’s island to obtain some evidence, namely books that Wilhelm kept. They get attacked by some henchmen, but make quick work of them. As Bond and Richmond approach the plane to leave, Richmond gets shot in the back by Kino with the Viper. 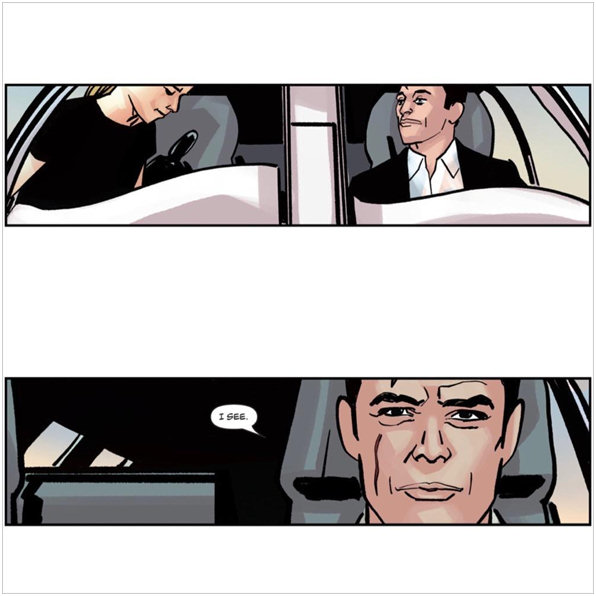 Barnes starts the issue off strong, with a quintessential villain scene. The vibe is felt immediately and I could easily see it make its way to the Silver Screen. Not only is the prototype weapon horrific in its capabilities, Banes wields it ruthlessly, without remorse.

The story transitions to Bond and Richmond traveling. Richmond gives off the feeling that she’s romantically interested in Bond, but 007 is mission focused, not wanting to get involved in that way with someone who has aided and abetted such heinous crimes. The scene felt padded out to me, paced with such decompression that it managed to stretch out over six pages before they reached their destination.

Once investigating the island, Barnes attempts to humanize Richmond, showing off her room, which has been kept to resemble her childhood home where she once felt safe. Barnes provides her the opportunity to show some remorse for her actions. It fell flat for me, especially with Bond reiterating his stance on the matter.

Action soon comes, fast and furious, but feels too simplistic and lacks punch. One splash page in particular feels wasted, which brings me to the major drawback this issue faces-the art.

Giorgio Pontrelli is the third artist in four issues on this series. I always hesitate to be too critical of art, especially as it’s a skill I do not possess, but as it is subjective, I can say that it does not catch my eye. His linework is often too heavy for me, feeling oversimplified and needing Augusto’s colours to pick up the slack. There is also a lack of smoothness to Pontrelli’s lines, adding to a jagged chunkiness.

Faces are inconsistent as well, with Bond looking like Connery at times and then someone else at others. 007’s scar varies in length as well, sometimes coloured red, sometimes not. It could also be confused for a wrinkle. Action scenes lack visual flair and tension, falling short compared to earlier in the series.

After a promising beginning, the issue quickly loses momentum as it spirals into uninspired action, ending in the expected cliffhanger. Hopefully, Barnes can right the ship with the closing installment.