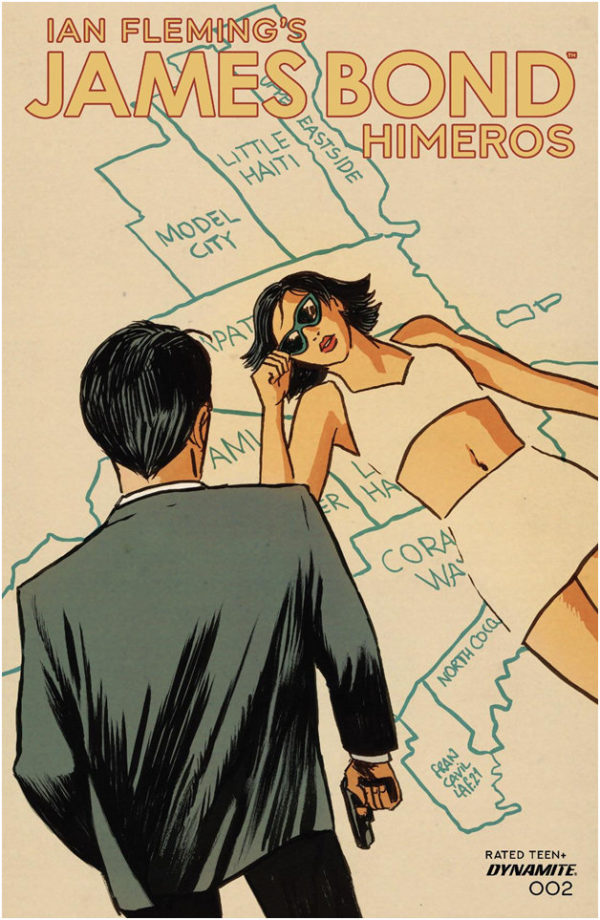 As Richmond tries to convince 007 that she’s not totally to blame for her crimes, the net gets tighter on them as Kino strikes!

In the South Pacific Ocean a Dutch mercenary outfit arrives at Wilhelm’s private island, only to be rapidly struck down without mercy.

Meanwhile in Florida, Kino has located 007 and Sarah Richmond, brazenly attacking them in their hotel room. Bond and Richmond flee in 007’s rental, making it look like they took a turn too fast and perished crashing into the ocean.

Richmond takes Bond to meet some of her friends, who are docked in a nearby pier on a yacht named “White Rose”.

If the first issue of Himeros was all set up, this one is near all action. Barnes stretches out the arrival of mercenaries that we don’t know to Wilhelm’s island over the course of five pages, brutally mowing them down with what may be automated defenses. As this happens, Richmond is still trying to justify her crimes to 007 in voiceover. Fuso stages the action dramatically, with his art looking like storyboards for an unproduced Bond motion picture.

Richmond’s justifications have to take a pause when M phones 007 to advise him of what has transpired on the island. Despite Richmond’s declarations of innocence in this matter as well, Bond, as a seasoned agent, knows to not take her proclamations at face value. I appreciate that Barnes creates that doubt in the reader. What secrets await on the island? Are Richmond’s assertions just an act to get what she wants?

Those questions get quickly tabled as Kino, utilizing housekeeping as a diversion, makes his move to eliminate Richmond. I appreciate the visual dichotomy as he and 007 struggle. Bond is in his usual bespoke suit, whilst Kino is unassuming in his tee-shirt and shorts. Regardless of dress, both men are at their top of their game in hand-to-hand combat. As before, Fuso is very good at pacing out the action. Blows look like they hurt and the compositions are exciting.

The issue moves very quickly, however. So, whilst it is an entertaining read, it can also be a bit unsatisfactory in its brevity. Kino learns that 007 is more than just a bodyguard and Bond, well, he’s still left with the feeling that Richmond can’t be trusted at face value and is far from innocent. While there are intriguing moments, this is one issue that will probably read better once it’s all collected. Barnes closes strong, with the feeling that 007 may be out of the frying pan and into the fire.