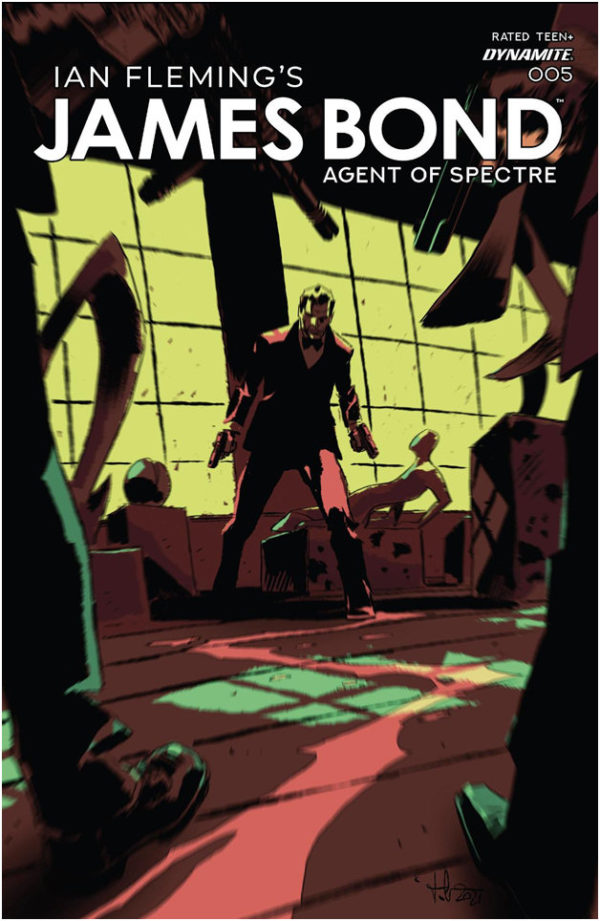 It’s all led to THIS! Titania Jones versus Ernst Stavro Blofeld for control of SPECTRE with James Bond trapped in the middle! Even if 007 defeats the winner, how does he escape from Blofeld’s personal island?

Bond and Blofeld find themselves surrounded by SPECTRE agents who have been turned by Titania Jones. Blofeld refuses to surrender and touches a hidden button on his ring, setting off timed explosions all across the island! 007 finds himself confronting an armored-up Titania as he tries to make his escape. Using his ingenuity and knowledge of her Talos suit, he blinds her, causing her to doff her headgear, allowing Blofeld to fatally shoot her. With one threat out of the way, Bond and Blofeld confront each other. 007 maneuvers the head of SPECTRE into one of the explosions and makes his escape. Back in London, Bond debriefs at M.I. 6. Meanwhile, SPECTRE restructures in Switzerland… 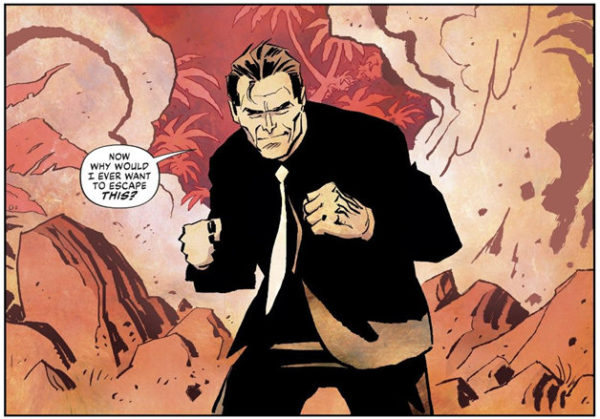 All the players are in place and the final act is in full swing this issue! Gage doesn’t let up on the excitement as Bond tries to survive against nigh-impossible odds! Even with the three main players all aware of each other’s betrayal, there is no stopping them from trying to make various deals to get the best outcome. At this point, how does anyone expect to trust the other? I imagine they don’t really. It’s a lot of fun seeing 007 outsmart his opponents, but punching an armored helmet doesn’t seem like a good idea. Just ask Roger Moore how well it worked out decking Jaws in the metal teeth!

What praise can I heap upon Casalanguida that I haven’t already? His layouts lean towards the cinematic and heighten the action when need be, like when 007 throws Titania off the gantry. Furthermore, his action scenes are concise, violent, but never too gory when they get lethal. You can tell Bond is enjoying the challenge and Blofeld is enormous, adding to his level of menace as he squares off against the smaller, but no less ruthless, 007! I also appreciated the touch of opening and closing the issue with a splash page! It added to the larger than life feeling!

Heather Moore’s colors add a painterly veneer to the multiple explosions that rock the island of Meraki. The sunset burns shades of red, matching the blood being spilled during the conflict. Brushstrokes are heavy as Bond reflects on the boat. Returning to London brings back the drab office tones that give way to inky blacks as the scene transitions to SPECTRE HQ, symbolizing the villains cloaked in their villany. I can’t imagine this book without the combined visual talents of Casalanguida and Moore!

James Bond: Agent of SPECTRE was the series Dynamite needed to reinvigorate their 007 line! Gage has a firm grasp of the series’ tropes and mixes them up in an interesting way. He toys with the characterization that Bond is unhappy with his lot in life, but reaffirms where 007’s loyalties lie. While he doesn’t push it quite as far as he could, he still leaves the further adventures of James Bond ripe with excitement ahead and I, for one, would be happy to see him return… just like James Bond.