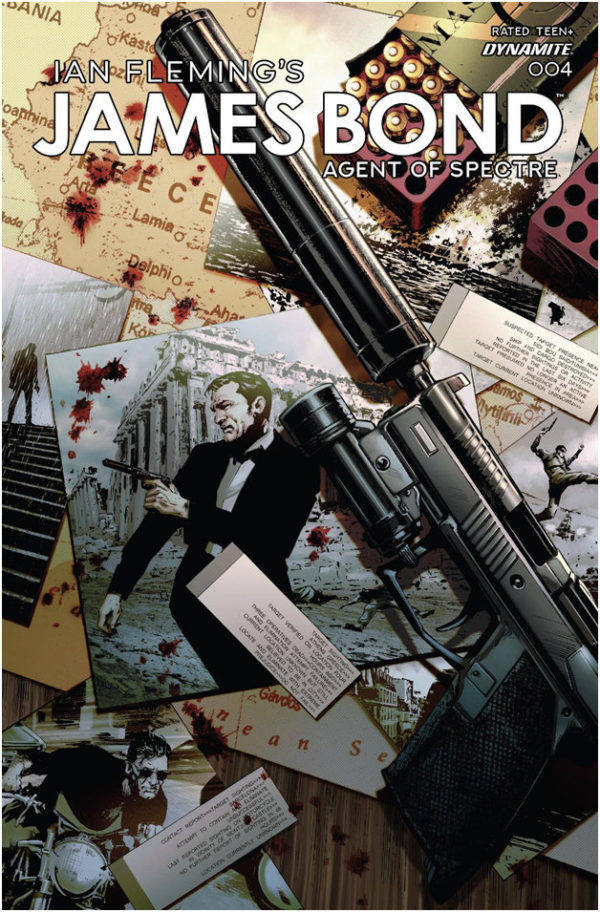 Athens, Greece is the battleground as Titania Jones makes her move to dethrone Blofeld as the head of SPECTRE! Get ready for all-out action as 007 teams with his greatest enemy for survival!

007 and Blofeld are at a restaurant strategizing when Titania makes her move, sending a helicopter to assassinate the head of SPECTRE. The duo make quick work of it, but more of her men arrive, courtesy of knowing Bond’s location from the microchip Titania planted on him last issue. Blofeld gets a leg wound as they make it to his car. Thanks to Bond’s driving, they are able to evade and eliminate their pursuers.

After dealing with the local authorities, who are all working for Blofeld, the head of SPECTRE takes 007 to his home, christened “Meraki”. Bond is in need of a communications expert so they can reverse track the chip. Unfortunately for them, Titania has still been using it to follow them. 007 and Blofeld gather a strike team and gear up, only to have members of the team turn on them, killing all who are loyal to Blofeld. Titania arrives in full body armour, ready to depose the head of SPECTRE and take his place. 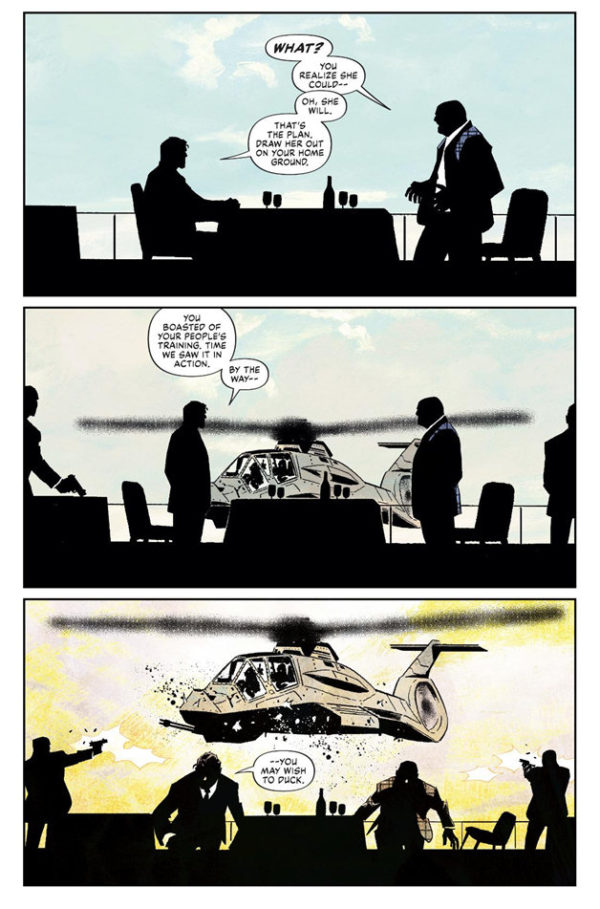 This series hasn’t been short on action, but this issue really delivers the goods in that department. After a few quick establishing shots, Gage leaps right into the big set piece of this issue, with Casalanguida providing cinematic panels that set the pace and tension. Bullets are flying, cars go whizzing by at breakneck speeds, and Bond and Blofeld are joined at the hip through it all! Taking inspiration from Spectre and Live Free or Die Hard, this dynamic duo is able to overcome their assailants with minimal injury.

I quite like how it was revealed that Titania was able to track Bond. She wasn’t simply using him for their own mutual carnal needs, but to implant a tracer in the scratches she gave him. It speaks to her inventiveness in manipulating the 00 & how deviously clever she is. It also speaks to Bond’s sagacity, that he was able to figure out what had happened and remove the device from his back with a pocket knife, similar to Patrice’s bullet fragments in Skyfall.

What I didn’t care for is how both Bond and Blofeld, once Titania’s initial attack had been sprung, didn’t attempt to block or jam the tracker in some way to prevent a repeat. Knowing it was still operational makes it seem very foolhardy that they would allow her to know the location of Blofeld’s true base as they try and turn the tables and get a fix on her. Two such seasoned men as them should’ve taken that precaution right away and not been so shocked when the reverse trace revealed she was still on their tails and at their location already. Perhaps Blofeld doesn’t deserve to be the head of SPECTRE after all!

Of course, this leads to establishing this issue’s climax, setting the stage for an explosive finale! Not only has Titania arrived in full force, but she has turned several of Blofeld’s men as well! Things look dire for our favourite Double-Oh and I am excited to see how bold Gage is in resolving this conflict! Being independent from the novels and films gives the comic a licence to be daring and I hope that freedom gets used.

Before closing, I’d be remiss in not singing the praises of Heather Moore. Her colours bring Casalanguida’s art to vivid life, be it the vibrancy of the Athens sky, the various shadings of Blofeld’s suit, and the devilishly warm hues of Meraki. Many of the backgrounds take on a painterly feel and this issue, like the ones preceding it, was a joy to look at.

James Bond: Agent of SPECTRE has been the shot in the arm Dynamite’s 007 comic has needed. Gage’s story has been full of twists and Casalanguida has excelled at depicting the action, making it as exciting as a big-screen adventure! I eagerly await reading the conclusion!