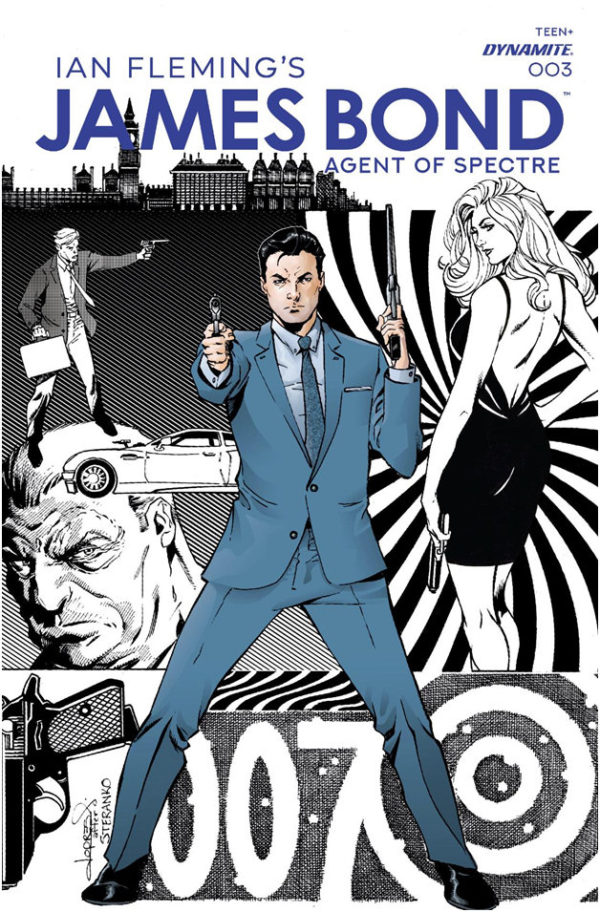 Can 007 convince Titania Jones to pay him more to kill Blofeld than Blofeld has agreed to pay Bond to kill Titania Jones? The SPECTRE civil war is heating up!

007, after shooting Felix Leiter in the head, gets embroiled in a struggle with Titania Jones. However, the dashing spy reveals he is working for Blofeld and volunteers that he’s willing to entertain a counter-offer from his target. Intrigued, the villainess decides to hear Bond out and before too long they are in bed together, both figuratively and literally.

When Bond is… free from entanglements, he contacts Blofeld, telling the head of SPECTRE of his ruse concerning Titania, reassuring the baddie that he’s still in his employ. With Blofeld convinced, Bond makes one final stop before departing for Greece-George Washington University Hospital, where a very-much-alive Felix Leiter is recovering in secret. The two friends fill each other in on what transpired and 007 heads out, ready to bring all of SPECTRE down! 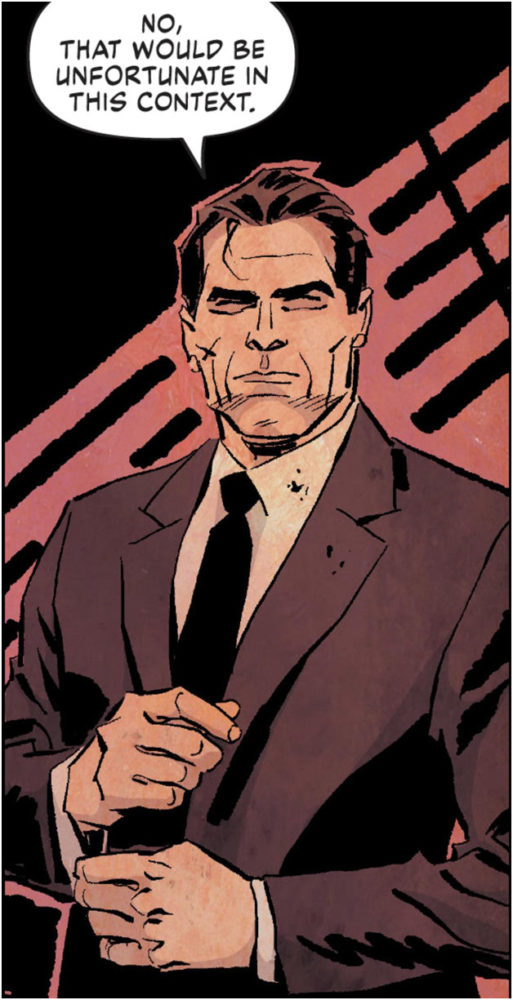 After a shocking cliffhanger last issue, Gage opens the story in media res as Bond and Titania struggle after 007 has shot long-time ally Felix Leiter in the head! As they fight, Bond proposes a counter-offer to the high-ranking SPECTRE operative. Similar to Kurosawa’s Yojimbo (or Leone’s A Fistful of Dollars, for you Western fans), 007 is playing both SPECTRE factions against each other. It’s certainly a dangerous game, but I appreciated the nod to such a famous story. Bond’s way of getting Titania to trust him was certainly in character for the debonair agent.

Despite Bond’s charisma, Titania still keeps her guard up and maintains an air of authority as they begin their, shall we say, partnership. She’s using Bond for her own needs and interests just as much as he’s using her, but she maintains her demeanor and control, never falling into the “Oh, James…” type of Bond Girl who simply swoons for the Double-O. Their relationship is very transactional.

What of Felix Leiter? Once again, he’s cheated death and is recuperating in secret and under guard at George Washington University Hospital. Bond’s disguise of glasses and a beard seems ridiculous, given how easy it is to don and doff, but the real crux of this scene makes up for it.

As Felix points out, Bond’s not visiting so much to see that Felix is okay after being shot in the head, but to make sure that they’re okay in their friendship. For all the callous and dismissive talk Bond has thrown about in front of Blofeld and Titania to maintain his cover, he very much still cares for Felix. While I didn’t doubt this, I appreciated seeing the vulnerability in Bond, that he would risk his life to see that Felix understood what happened and why. It was fun to see Felix be touched by Bond’s devotion and rib the secret agent as they tried to keep their stoic, macho fronts up, whilst still reaffirming that their friendship was strong.

The issue closes with Bond leaving to bring down all of Spectre. He’s defiant as he strolls off, which makes for a fine ending, even if it lacks the punch of the last instalment’s cliffhanger.

Gage has got the Bond cocktail right in this issue, combining action, romance, danger, and a dash of characterization. Casalanguida is excellent as always, depicting a formidable 007 in a noirish world. I eagerly await to see how the next chapter heats up when Bond arrives in Greece!