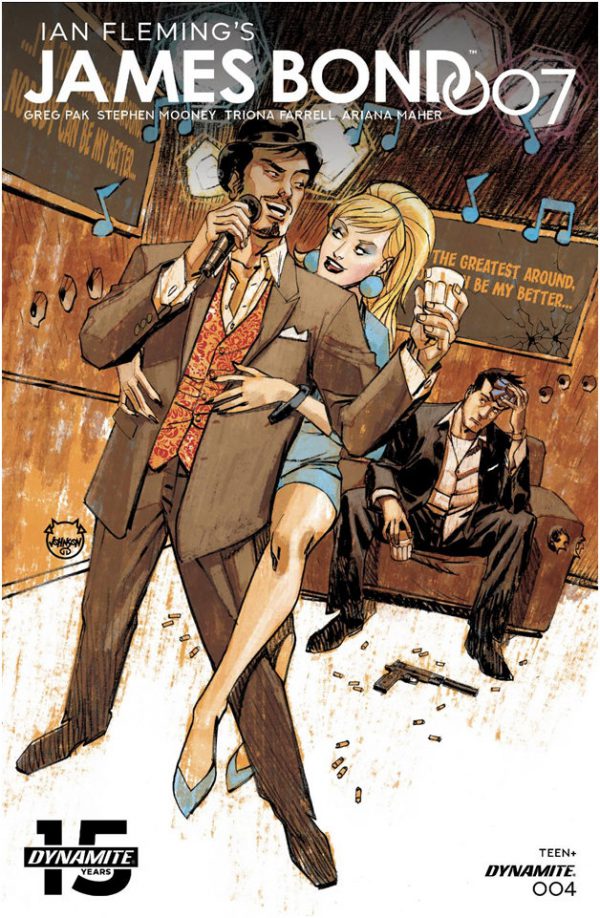 At an Oru meeting, it is revealed that their prototype devices passed their testing and had the potential in their scenario to render 13,000 casualties. All they need now is the Russian and his case…

In Australia, Agent K and the Russian check into a hotel, closely followed by 007, Moneypenny, and Oddjob. Agent K is trying to defuse the bomb and liberate the Russian from the case. Oddjob seduces a very drunk member of a bachelorette party and uses her nearby room to set up surveillance on Agent K’s attempts.

The Russian has other ideas and tries to make a break for it, eventually taking Agent K hostage as 007 and Oddjob give chase to a nearby beach. Oddjob shoots and kills the Russian, but the case does not detonate.

Oddjob is more concerned about Agent K, asking if she remembers. After a pause of recognition, she draws her gun, but gets disarmed by Bond. She escapes in a nearby boat.

Oddjob reveals to Bond that her name is Aria Kim. They trained together before she was recruited and brainwashed by Oru ten years ago. He feels he can save her. Bond is skeptical.

Seemingly against common sense, Oddjob opens the case and it’s filled with gold.

This story begins a new phase in the arc and is marked by a new artist, Stephen Mooney. I find his art to be a bit of a mixed bag. Most of his layouts tend to be on the bland side and his 007 is often inconsistent. Faces, too, often suffer from lumpiness or ridiculous mugging. That’s not to say that it’s all bad. Some expressions and conveyance of body language can be quite good. Bond seems at his most suave and confident during one panel at the bar as he is entertaining a bachelorette party. It was reminiscent of George Lazenby surrounded by the Angels of Death in On Her Majesty’s Secret Service. Sadly, though, it happens to be 007’s only highlight. 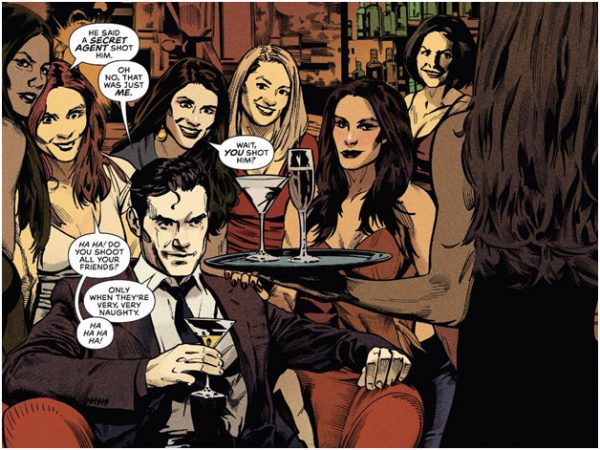 Pak moves his story forward, slowly filling us in as to what Oru’s goals may be. When it comes to Bond and Oddjob, their forced team up doesn’t negate their continued attempts to prove who’s the better operative. It wouldn’t feel so tiresome if 007 had more to do this issue. This is clearly becoming Oddjob’s story as Bond is just along for the ride.

For example, it’s Moneypenny, not Bond, who ascertains where in the hotel Agent K is holed up. Oddjob is the one who infiltrates a group of women, using one to take advantage of their proximity to Agent K’s room. Bond is relegated to being annoyed with the karaoke stylings of Oddjob. Moneypenny and Oddjob are the ones doing the actual surveillance as Bond returns to the bar to have drinks with the bachelorette party. Bond doesn’t save Agent K from the Russian, nor is he unable to prevent Oddjob from opening the case, which could detonate. The only thing 007 accomplishes is shooting the gun out of Agent K’s hand, an act which causes Oddjob to throw his gun at Bond and then tackle him.

I found the action in this issue to be a bit incomprehensible at times. Mooney breaks up his standard paneling, which leads to a more exciting feel, but there are a few leaps one has to make in following the story. How does Bond down in the bar suddenly become aware of the fight up above and the Russian’s escape? In an attempt at brevity, 007 is seen sprinting at the bar in one panel and the next has him on the beach with no context of how he knew to go there or how all the characters wound up in that locale. Oddjob tossing his gun was unclear on my first read. The way it’s laid out makes it seem that Oddjob is trying to grab the gun that Bond shot out of Agent K’s hand as it hangs in midair instead of throwing his own firearm.

I did enjoy how Mooney punched in on Oddjob as he fired the fatal shot at the Russian. The Russian’s demise was suitably dramatic as his head whipped back, his case appearing to fly out of the panel. Ending on a splash page revealing the contents of the case they have been chasing over the course of four issues was well laid out.

My excitement for this title has waned over the last two issues. Bond feels more like an afterthought in his own book, with Oddjob taking center stage. Bond comes off as clueless and someone who is more interested in showing his superiority over a rival than England’s top secret agent. Oddjob is fast becoming the hero in this book. Who would have thought?